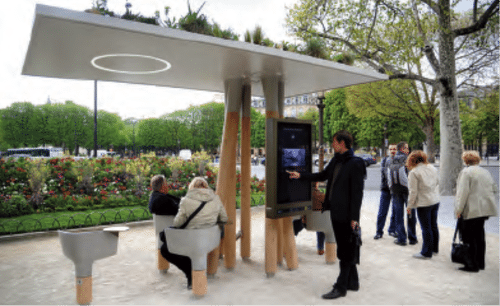 Imagine if, with the stroke of a key, city officials could change the color of Atlanta’s skyline to champion certain causes: downtown streets, plazas and even landmark buildings might glow pink to promote breast cancer awareness or red whenever the Hawks played home games.

Themed LED lighting is just one of many corporate-sponsored initiatives that the Mayor’s Office of Innovation Delivery and Performance is considering as part of a new experiment in municipal marketing. Other ideas include working with private companies to install digital media kiosks and user-generated installation art on public walkways and outdoor soccer fields under I-85.

The decision to team up with private companies to monetize public space is motivated chiefly by the city’s financial struggles — in particular, its $900 million infrastructure backlog. Through ads, city officials hope to generate at least $5 million in new revenue each year.

“This can’t be purely just to make money, although that’s the catalyst,” said Samuel Adams, project consultant with the city’s innovation team. Ideally, he said, future projects would offer a “triple bottom line” that benefits the city, businesses and residents. “If we focus on citizen benefit, we won’t be viewed as just plastering the city in ads and calling it a day.”

Still, many Atlantans are uneasy about the prospect of mounting advertising in a city where billboards already promote everything from Coca-Cola and Chick-fil-A to hair transplants and MBAs. The plans bring up the specter of the 1996 Olympic Games, when city officials were widely criticized for hiring a marketing firm to boost revenue by selling vending rights to its sidewalks and parks. The result was an ugly marketing spectacle that earned Atlanta the distinction of the most commercial Olympics in the game’s history.

Some fear the city’s partnership with private companies could transform the public landscape, creating unacceptable levels of visual pollution. “There’s a tipping point when it comes to inundating people with advertisements,” said Michael Gamble, an associate professor of architecture at the Georgia Institute of Technology, who specializes in urban design.

“In an urban environment that we’re all paying to support — either through property taxes or sales taxes — there are a whole series of questions that needs to be asked about who benefits,” he said. “Conceding access to private companies could have a profound impact on quality of life in the public realm.”

In an era of dwindling municipal budgets, a growing number of cities are partnering with private companies to develop advertising revenue. Paris has created billboards that double as street furniture. New York City has turned its public pay phones into Wi-Fi hot spots wrapped in ads. Even São Paolo in Brazil, which banned all advertisements in 2007, has signed a 25-year contract with an advertising company to provide digital clock towers that update residents with local news.

Not all experiments have been successful. San Diego, a pioneer in municipal marketing, generated public pushback as it tried to sell ad space on beaches and in parks. Chicago faced criticism last year when it began to install 34 digital billboards, advertising Miller Beer and the Illinois Lottery, on city properties near downtown highways. One critic dubbed the project a “supersize swatch of ugliness.”

In Atlanta, officials hope they can avoid potential PR catastrophes by identifying projects with public benefits and consulting local communities. Last month, more than a dozen corporations and nonprofits submitted files to the mayor’s office, responding to its call for information on advertising and sponsorship opportunities that would “activate City rights-of-way and public spaces in innovative ways.”

Some ideas, such as more digital billboards and bus shelter advertisements along high-traffic corridors, are fairly conventional, if controversial. Others would introduce entirely new visual elements and amenities to the city.

The same company also proposes introducing user-generated installation art along public walkways, inviting pedestrians to take selfies and upload doodles, which would then be curated onto large outdoor digital canvases.

A different firm, the Atlanta-based Spur Institute, imagines a pair of covered soccer fields — supported by regular outdoor advertising — under the Cheshire Bridge Road underpass of I-85.

All future projects would have to be approved by the city. The mayor’s office is currently interviewing candidates for a new director of marketing partnerships position. In April, officials hope to convene a review committee — made up of representatives from the city’s legal, public works, parks and information technology departments — to select ideas and start preparing requests for proposals.

Adams believes the city has learned from its Olympics debacle, becoming more attuned to residents’ needs. Yet he admits that, when it comes to experimental advertising, “the devil is in the details.”

Although the goal is to benefit the city, businesses and residents, Adams admits that not all projects will deliver an equal balance. Some might bring in more revenue, with others focused more on citizen amenities.

At this stage, there are no fixed plans on the placement or scale of future advertising, or the length of contracts with outside sponsors.

The city has laid out some ground rules: new advertising and marketing opportunities would be in “designated commercial districts and high traffic corridors,” such as Downtown, Midtown and Buckhead. Certain key areas, like Atlanta Public Schools, would be out of bounds. Advertisers would not be able to advertise on Atlanta police cars or fire trucks or within areas such as the Centennial Olympic Park, the BeltLine, or Hartsfield-Jackson International Airport.

Initially, the city is likely to introduce initiatives with a lower level of advertising, much in the same way that it invited residents to use its new streetcar without paying fares. “We’ll get people invested in the services and then ramp them up the advertising as people acclimate,” Adams said.

City officials are also interested in exploring temporary networks of digital advertising that would allow private companies access to key markets at peak times. Instead of putting up permanent billboards and LED screens around Peachtree Street or Piedmont Park, for example, the city might install an underlying infrastructure that would allow LED screens to go up for a few days for specific conventions or festivals.

“If the expectation is high energy, people have already suspended their need for a peaceful, quiet place,” Adams said. “That’s the time when advertising makes sense.”

Some who were initially skeptical about the prospect of more corporate sponsorship in public space now say they are cautiously optimistic about what might happen as the experiment unfolds.

Michael Halicki, executive director of Park Pride, a nonprofit group that works to improve Atlanta parks, said advertising defeats one of the key purposes of parks — to get away from it all. Yet after taking part in some brainstorming sessions with the innovation team, Halicki hopes that the city and its underfunded parks system can collaborate to find innovative ways to leverage outside dollars without undermining the park experience.

Art installations, digital kiosks and LED lighting could be explored, Halicki said, as long as they follow parks’ existing guidelines, respond to community feedback and are executed in a tasteful way.

“It’s a different conversation depending on the community,” he added, noting that what might work in Piedmont Park might not work in Olmsted Linear Park or Old Fourth Ward Park.

“I don’t think we’re on a collision course with the city,” Halicki said. “I’m hopeful, at the very least, that this will do no harm, and we might actually come up with some creative, out-of-the-box ideas.”