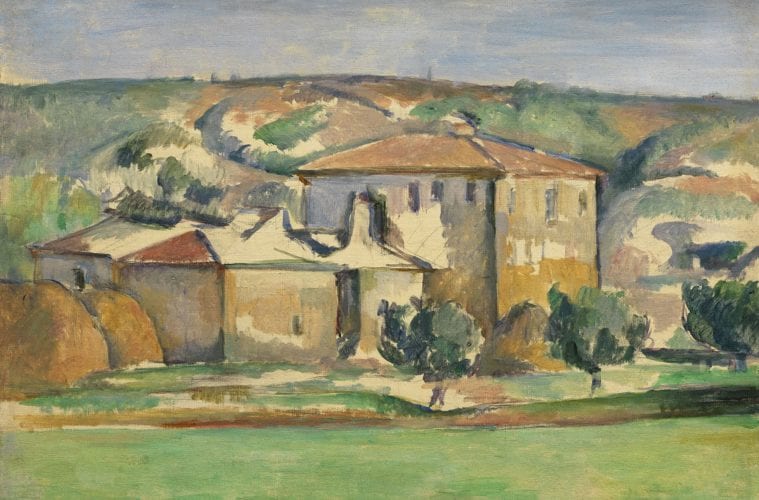 Art collector Henry Pearlman “bought what he liked and what made him happy.”

So says an essay in the catalogue of Cézanne and the Modern: Masterpieces of European Art, the exhibition from his collection at the High Museum through January 11.

But the art that made Pearlman happy is exceptionally significant and striking, and should make a good many Atlantans happy as well.

The Cézanne gallery (8 oils on canvas, 16 watercolors) would be enough to justify this statement, as would the other collection in depth, Chaïm Soutine’s wonderful distortions of landscape and portraiture. Everyone will have their favorite works by both artists, but it’s particularly interesting to see Cézanne’s watercolor of Mont Sainte-Victoire adjacent to a painting of the same subject, and to note the affinities between the style of the watercolor and his unfinished oil on canvas Route to Le Tholonet.

But these are far from the only stop-in-your-tracks moments. In a collection full of the major 20th-century artists working in France, there are a remarkable number of unique treasures.

Some of them are particularly piquant to those of us attracted to the astonishing anecdotes of the Parisian art world recounted by Roger Shattuck in The Banquet Years: The Origins of the Avant-Garde in France, 1885 to World War I. But the basic stories are summarized in this exhibition’s wall text, alongside works that would be more than enough without them. Two examples: Modigliani’s insultingly insightful commissioned portrait of Jean Cocteau, which Cocteau paid for but abandoned because he claimed it was too large to fit in a taxi, and the bidding war between Degas and Renoir incited by Cézanne’s arresting watercolor of Three Pears.

There is also a visually and conceptually exquisite artistic joke, Toulouse-Lautrec’s send-up of Puvis de Chavannes’ reverently atmospheric homage to the spirit of classicism, The Sacred Grove. Toulouse-Lautrec’s similarly titled sacred grove is a faultless knockoff of Puvis’ painting, but with a bevy of formally dressed figures from the Parisian art world crowded into the right-hand corner of the grove, with Toulouse-Lautrec himself urinating on the ground.

All of this implies that the collection has an underlying narrative about the birth of the modern, which in a real sense it does, but in fact it consists more of wonderfully surprising and provocative individual moments: a Modigliani sculpture that is earlier and deliciously rougher than the ones we know from the textbooks, for example, or Te Fare Amu, the relief sculpture Gauguin carved for the doorframe of his house on Tahiti (though this wood panel was lastingly modified in past decades to suit prudish American sensibilities). In other words, this is a collection of inventively chosen, captivating objects, many of which capture the energy of a major part of a pivotal moment in art. Other works seize our attention strictly for their own sake, such as Alfred Sisley’s River View, one of the very few Impressionist paintings Pearlman acquired, or Degas’ improbably posed oil on canvas After the Bath, Woman Drying Herself.

There are moments that feel peculiarly idiosyncratic; similarly dark and very small, the portrait paintings by Courbet and Daumier arrayed at the beginning of this exhibition would be an example. (After Pearlman bought the then-unattributed work later identified as a Daumier, he discovered it had been previously acquired by Gertrude Stein in 1907, giving it a memorable Banquet Years provenance.) As that anecdote implies, Pearlman brought an intuitive sensibility to his collecting rather than an art historical one, but later amplified his intuitive choice with scholarship combined with happy-accident realizations. This practice, reflected in the diverse subject matter of the scholarly essays of Cézanne and the Modern’s excellent exhibition catalogue, brings art historical revelations for many of us. Never having paid attention to Van Gogh’s love affair with vanishing moments of transportation, I was surprised as well as delighted by his Tarascon Stagecoach. Camille Pissarro: Still Life: Apples and Pears in a Round Basket, 1872, oil on canvas. The Henry and Rose Pearlman Foundation, on long-term loan to the Princeton University Art Museum.

Another singular acquisition, Pissarro’s Still Life: Apples and Pears in a Round Basket, has been creatively contextualized by the High, which has taken the occasion to highlight the personal connections and stylistic conflicts between Soutine and Pissarro through a side gallery devoted to the High’s single Soutine painting and its extensive holdings of Pissarro’s more literalist approach to landscape. This is a diverting moment of art historical delight, much as it represents a side trip from the main currents of the School of Paris. But of course it is the Cézanne gallery that is the enrapturing focus of the exhibition, with the smaller array of Chaïm Soutine paintings as a differently enrapturing complement. Soutine’s life-affirming distortions are as compelling as Cézanne’s epoch-making transformations of still life and landscape, and it’s clear why both would have appealed deeply to this complex collector.