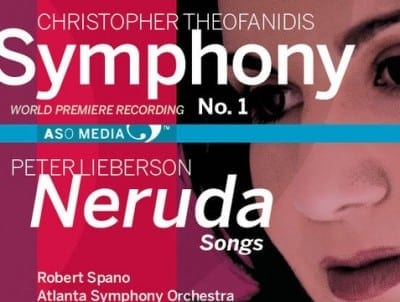 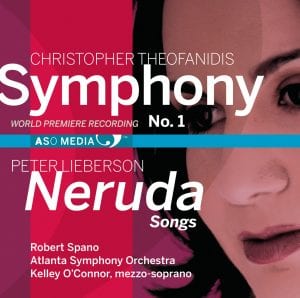 The most obvious is that an orchestra nowadays can produce and distribute recordings on an in-house label that match the sonic standards and professionalism of the major labels. Advertising is a different matter, however, and there’s been very little buzz in the national musical community over this new release or over the label’s debut earlier this year, Jennifer Higdon’s “On a Wire” and Michael Gandolfi’s “Q.E.D: Engaging Richard Feynman.” Both recordings find the ASO playing in top form, led by Music Director Robert Spano.

Theofanidis’ 12-minute Symphony No. 1 reaches for The Big Statement. At its world premiere in May 2009, it was billed with the possibly ironic title of “Symphony,” although there’s nothing postmodern about the score. Indeed, as with the other core members of Spano’s “Atlanta School” of composers — Higdon and Gandolfi — the music is post-ironic. There’s much to admire, from its earnestness and craftsmanship to its engagement with a large canvas. Theofanidis’ symphony takes a Mahlerian view that the orchestra can express everything, which is filtered through symphonic Hollywood, from John Williams to Tan Dun, with a heavy use (or overuse) of percussion for grandiose effect. Almost every time the music begins to surge, you can anticipate a cymbal crash at the peak. The second movement holds a powerful charge, with a series of Doppler-like echoing chords, one of many lovely passages. For all the potency he builds up, Theofanidis reaches for stock gestures and the intensity slips away. The finale’s heavy bombast is out of proportion to the substance of the material that preceded it. But the symphony is plump with ideas and striking musical images.

Theofanidis’ youthful tendency to cram everything into a symphony is the opposite of Peter Lieberson’s serene, bittersweet, late-in-life compositional voice. This recording of the “Neruda Songs” is both noble and misguided. (Read the ArtsCriticATL interview with the composer about these ASO performances; he died a few months later.)

The composer’s late wife, mezzo Lorraine Hunt Lieberson, inspired the work and participated in its creation. Her glorious, heartbreaking CD, with the Boston Symphony, must be counted among the most essential recordings of contemporary classical music in the catalog. Aren’t we still too close to her death to want or need another version, especially from another female singer? (Would a baritone version fill a different niche?)

At the same time, Spano’s argument that the “Neruda Songs” must join the standard repertoire is enlightened and compelling. You want it to work. Nevertheless, the basic obstacle to mezzo Kelley O’Connor’s clean and well-acted performance is trying to get Lorraine’s voice out of your head.