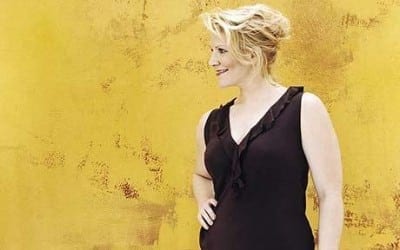 The quintessential “down-to-earth American opera star” — a model that was in place long before Beverly Sills — DiDonato is known as one of the hardest-working singers on the stage today. Raised in Prairie Village, Kansas, a suburb of Kansas City, she blogs as Yankee Diva on her website, scrutinizes past performances like an elite athlete reviewing last weekend’s game and shrewdly cultivates her talent: a flexible, clear, opulent mezzo with a soprano tint to her voice. At the moment, it’s hard to talk about DiDonato’s art, which is glorious, without also talking about her career and the marketing of that career. (In this she follows in the line of recent “top divas” Renée Fleming and Cecilia Bartoli.) A few horrible breaks have even yielded lucky outcomes, such as when she broke her leg during a 2009 “Barber of Seville” in London, finished the performance on painkillers and a crutch and sang the rest of the run from a wheelchair (photo above, with pink cast). It made the news, naturally, and proved that this mezzo won’t easily be dislodged. Quite literally, she’s at the point in her career where she makes no missteps. Vocally, the payoff has been huge. Among DiDonato’s latest recordings, on the Virgin Classics label, is “Diva/Divo,” a transgendered collection of opera arias, where she sings both “skirt” and “trouser” roles from the same opera or fable, with arias from Cinderella (Rossini) and Prince Charming (Massenet) and from Romeo (Bellini) and Juliette (Berlioz). In Mozart’s “Marriage of Figaro” and “La clemenza di Tito,” she tackles both genders within the same opera. The CD’s opening number, “Je suis gris” from Massenet’s “Chérubin,” is delectable, her voice lush yet focused, with what sounds like a new sheen and a new warmth.

And her stock is still rising. Next season at the Metropolitan Opera, she and David Daniels, an Atlanta countertenor, will star in the world premiere of “The Enchanted Island,” a Baroque pastiche opera conducted by William Christie.

I spoke with DiDonato just after she completed a run of “Dead Man Walking,” playing Sister Helen Prejean, at the Houston Grand Opera. She’s now on a national tour that started in Fort Worth and will culminate March 6 on the big stage of Carnegie Hall, in her recital debut there.

ArtsATL: Do you approach opera differently from song recitals? I notice there’s just one opera aria on the program, although it’s not one people are likely to recognize.

Joyce DiDonato: Yeah, I hated to program an aria on a recital. I thought I could get away with it. I’m known as an opera singer and people want to hear the big numbers. But I have too much respect for the song-recital repertoire, and I need that to keep growing as an artist. I need to explore and really — I know this sounds Pollyannaish — earn the privilege of standing on stage. That’s being high-minded about it, I know.

ArtsATL: Do you prepare for them differently? The mindset must be different?

DiDonato: I have the same vocal warm-up exercises, but in a recital there’s nowhere to hide. The onus is all on me, partnering with David Zobel, my pianist. There are no filters or distractions between me and the audience, and you can’t let down your concentration for two solid hours. In opera, you get your moments but share the stage with other people. Song recitals are a lot of pressure.

ArtsATL: Tell me about your Spivey program.

DiDonato: It’s a “my favorite things” sort of program, and each half goes from darkness to light. There’s no warm-up: I start with Haydn’s mad scene [Scena di Berenice], a concert piece of operatic intensity. There’s a sad Largo when she’s losing it, and then this really virtuosic Allegro that’s all fireworks. You hear everything a singer has to offer in that 15-minute scena. There’s a set by Cécile Chaminade. I like to think of her as not a woman composer but a very fine composer for the voice who happens to be a woman. Her music is very French, a little fluffy, let’s-talk-about-spring and the bees buzzing in the trees. There’s a lot of Italian music, [including] the aria from Rossini’s “Otello,” which expands the recital program in a good direction.

ArtsATL: I first knew you as a Handel and early-music singer, as a specialist in the heroic castrato roles. Now here you are on “Diva/Divo” singing Mozart and Rossini but also romantic Gounod and Massenet and even a little Strauss.

DiDonato: You set out with a game plan. I didn’t seek out to be a Handel singer, but that’s where I was getting really great roles. I knew Rossini would be an entry to me on a lot of stages, but I didn’t want to be pegged as a Handel or Rossini singer. With Massenet, it’s like my voice is firing on all cylinders. In [“Diva/Divo”] the musical content is serious but the idea is whimsical. It’s a lot of hard work, but I’m reaping the fruit of broader experience. It’s the right time on these vocal roles, in terms of my voice.