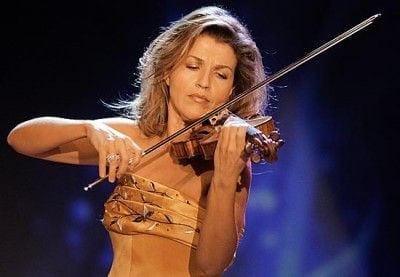 Anne-Sophie Mutter is one of today’s most incisive and glamorous violinists, and she has built a substantial career juxtaposing fresh interpretations of the classics with edgy new music, often in world premieres. She is thus in an honest dialogue with living composers, many of whom are eager to write music for such a sensuous and intellectual fiddler, a too-rare combination.

When I interviewed Mutter a decade ago, she mentioned a looming commission for her by an ethnically Tatar woman composer, raised in the Soviet Union, whom she’d never performed but found immensely intriguing: Sofia Gubaidulina. (Atlanta Symphony Orchestra audiences will remember Robert Spano’s conducting Gubaidulina’s “Two Paths,” a glorious, spiritual concerto for two viola soloists, a few years ago.)

Anne-Sophie has finally met Sofia. Mutter’s recent CD, on Deutsche Grammophon, pairs two beloved Bach concertos with “In tempus praesens” — “In the present time” — a concerto composed for her in 2006-07 by Gubaidulina (in photo below), now 77 years old. It’s an extraordinary match of composer and performer.

Fundamentally, Mutter is an opulent romantic with a silvery tone and a modernist edge, and her Bach is springy and wholesome. To achieve clarity at fast speeds, she and the Trondheim Soloists, a chamber band, use baroque-styled bows.

In the Gubaidulina, Valery Gergiev (another Soviet-trained musician of non-Russian ethnicity) conducts the London Symphony Orchestra; the orchestration eliminates the entire violin section. In the CD booklet, the composer writes of her Orthodox faith and the wisdom of patron saint Sofia, and never mentions a “program” that might guide the listener through the 33-minute concerto’s five sections. Yet to my ears, the work is undeniably a narrative, a harrowing and enlightened woman’s tale.

At first the concerto seems an update of Rimsky-Korsakov’s “Sheherazade,” except that this tells no fairy tale. Rather, it might be akin to a 21st-century novel written by a Central Asian woman, with a strong female protagonist in a warlike culture. The music is so graphic (in a provocatively abstract way) that it demands the listener visualize a story, with the solo violin as the articulate narrator: there’s an eerie nocturnal scene of magic realism, and there are scenes of adventure and battle. The concerto’s climax comes as the full brunt of the orchestra towers over the violinist in a series of menacing triplets. She — the solo violin part somehow sounds feminine — at first protests, then pleads, then tries to flee. She can’t escape. The serene ending isn’t hopeful, but it is resolute — life will continue, in all its beauty and sorrow.