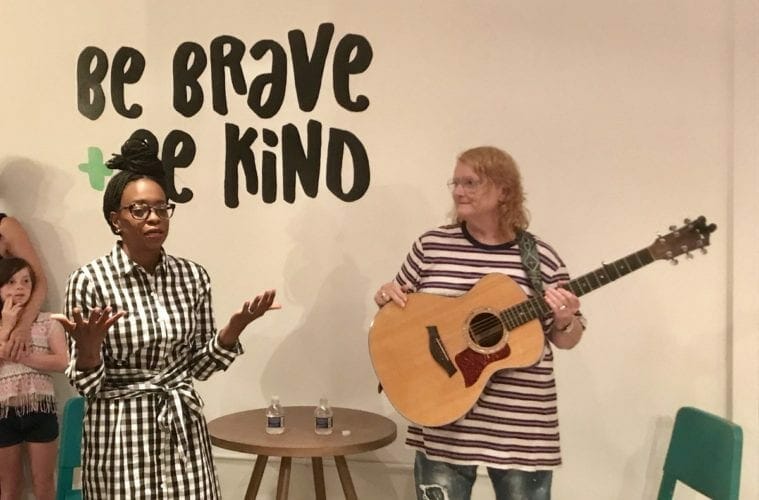 “The magic is only in what books say, how they stitched the patches of the universe together into one garment for us,” Ray Bradbury wrote in his futuristic classic, Fahrenheit 451.

Times have changed for bookstores since that novel was published in 1953. Amazon and other online stores have taken over the book market and pushed aside many independent shops. Brave + Kind Bookshop is one of the brick-and-mortar shops that holds tight to the tangible book you can hold in your hands, and to the sense of community that the best bookstores inspire.

Brave + Kind Bookshop approaches its one-year anniversary at the end of this month and celebrates with a birthday party on September 28. Owner Bunnie Hilliard says it’s been a roller coaster of a year, and looks forward to entering year two with additional programming and an events coordinator to help bring her ideas to life.

“Honestly, I don’t have a lot of retail experience,” she says. “Learning to understand retail trends while learning the book industry — it’s been an uphill learning curve for me.” Bunnie Hilliard’s passion for children’s literature grew after she became a parent, and led to her opening her own bookshop. (Photo by Octavia Elease Photography)

Hilliard admits she’s never been a bookworm. She recalls her fleeting thought of opening a bookshop in high school — around 1998 — after watching the film You’ve Got Mail, which features the lead female role as the owner of a small children’s bookstore in New York.

But after high school, Hilliard headed to college, where she received a degree from Florida A&M University and an M.B.A. from Atlanta University Center. After graduation, she went straight into corporate America, working at several banks — and then motherhood.

“I really delved into children’s literature once I became a parent and wanting to read more books to my own kids,” Hilliard says. “I stayed at home raising my kids for a bit; then there came a time when I was figuring out the next chapter of my life. I knew I didn’t want to go back into corporate America, so I thought about what I would do if I didn’t think I could fail.”

Hilliard sees Atlanta as a thriving independent book community — Tall Tales Book Shop, Little Shop of Stories, Eagle Eye Book Shop, Charis Books & More, A Cappella Books and Posman Books are all within five miles of her shop. To her, a neighborhood bookshop builds community through education and relationships.

At Brave + Kind, Hilliard handpicks the book selection. As youngsters we’re told “not to judge a book by its cover.” But most days, that’s exactly what Hilliard does. Her heart lies with beautiful, well-illustrated books that bring life to any bookshelf or sitting area. To her, children’s literature is more than a story — it’s a piece of art.