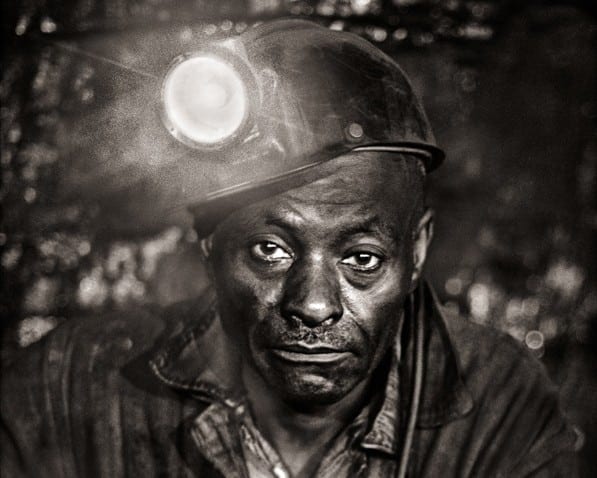 The demonstrator in I Am A Wo-Man, Memphis, Tennessee, 1968 penciled in “Wo” on her placard in what Levy thought a telling feminist reference — and a different take on the much-photographed march.

When photographer Builder Levy was an art student at Brooklyn College during the early 1960s, he spent his free time participating in and photographing political demonstrations.

Levy, now 71, knew that his art needed to reflect what was happening in the world. He is, as photographer Duane Michals has written, “a compassionate photojournalist in the remarked grand tradition of Lewis Hine and Dorothea Lange.”

The truth of this description is evident in Builder Levy: A Retrospective at Arnika Dawkins Gallery through November 26. The show spans his long career, from early work following the civil rights marches in Atlanta and elsewhere in the late 1960s to new-millennium street demonstrations on issues from gay pride to our involvement in Iraq.

Forty years separate these two bodies of work, linked by Levy’s steadfast belief in the power of documenting the struggles of real people. That belief resonates throughout the show.

As with so many documentary photographers, the power of his images emanates from deep involvement. For his series on Appalachia, Levy, who taught at-risk students in New York public schools, visited coal country countless times during off-times and summers. The Appalachian series offers raw portraits of coal miners — Toby Moore, Kentucky, 1970 is particularly striking — and realistic scenes from everyday life in and outside the mine.

In Oglesby Bedroom, Stotesbury, Raleigh County, West Virginia, 1982, the photograph gives us a glimpse of the interiors of a miner’s home through the reflection of a mirror. Powerful in its simplicity, Williamson, Mingo County, West Virginia, 1971 focuses on a sign reading “Prepare to meet God” as wagons of coal pass by. His 2013 book Appalachia USA: Photographs, 1968–2009 does for today’s coal miners what Walker Evans did for sharecroppers and tenant farmers in the Dust Bowl,” wrote Vanity Fair‘s Elissa Schappell.

During the retrospective’s opening, Levy remarked on the importance for a photographer to spend time on a place, “to feel and understand it intellectually but also visually”; this is true not only in remote places — his retrospective shows work in the Mongolian steppe and Cuba — but also in very familiar ones. In one of his signature images, Pigeon Cloud, Bushwick, Brooklyn, 1987, Levy captured a flock of pigeons rising in a cloudless sky, above a depressed area where he worked and taught photography for many years. The scene outside his window never felt right to capture until one late afternoon, he said, when everything seemed to fall in place: the winter light hitting the factory’s windows and the wings of the birds at the same time in a magical moment.

The young man walking away was one of his students, whom he sent out to be in the picture. The human presence makes the scene complete. Sometimes the magic needs a little help.