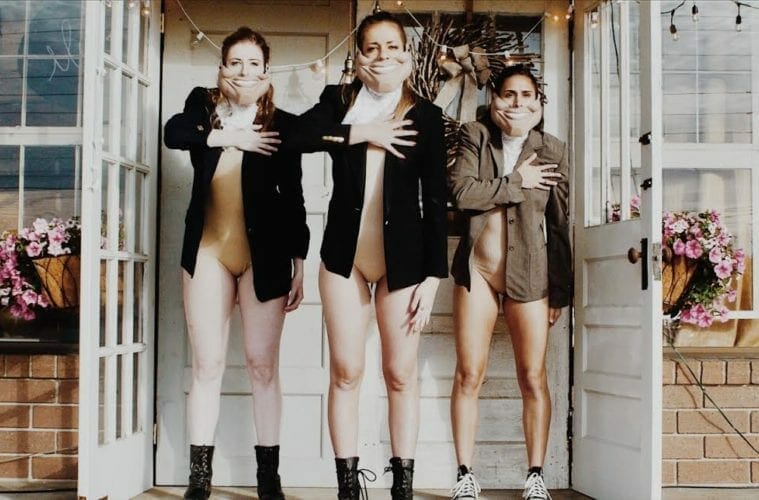 A clownish, cartoon smile is plastered on the faces of choreographer and filmmaker Britt Whitmoyer Fishel’s dancers in GRIN — a series of three abstract films. The films will be shown in conjunction with a Polaroid compilation and vintage advertising July 6–13 at The Bakery. The multimedia presentation is a weeklong installation that will be open for viewing noon–4 p.m. Monday and Wednesday, and 2–6 p.m. Tuesday, Thursday and Friday.

Two performances will take place at The Bakery’s opening (8 p.m. July 6) and closing (2 p.m. July 13) receptions. Fishel’s live iteration of the film’s choreography will have wear their half-masks with square, masculine jawlines. This work continues Fishel’s choreographic explorations in the construction of present-day feminine identity.

Fishel’s films, HID, KEPT and MEND, use shuddering camerawork and urgent flashes of red. The sound scores set distinctive moods, weaving in electric guitar, orchestral swells and spoken word. While HID stays in tight shots on the women inside an attic, KEPT takes place in a domestic garden space. The women are costumed in work jackets and lace collars, their movement largely genderless. In KEPT, the strongest of the three, the women pull at their masked faces and maintain sharp, triangular formations. MEND, set at a gas station, contains distally charged movement — circling and tossing gestures, a wiggle of the hips.

ARTS ATL spoke with Fishel on developing GRIN and on showing live dance and films in a gallery space. To see a filmed preview, go to this link.

ARTS ATL: Your past few works have really dug into this idea of “women navigating a man’s world.” How does GRIN evolve this concept?

Britt Whitmoyer Fishel: A lot of my research has encompassed the observation of what has or is still happening to women, linking past patterns to present: how women are spoken to, how we are objectified, how dependency is affecting our health and longevity and how advertising, media and literature play a role. GRIN, however, is more reactionary to my previous research. It responds by moving the woman into the protagonist role. It reveals instances where women are responding to these patterns, while asking questions about choice, survival and rebellion. How do women adjust, readjust, break the mold and forge ahead under vexatious situations?

ARTS ATL: What were the creative process and inspirations behind the films? Any key inspirations?

Fishel: The process was incredibly collaborative, as it often is with my work. The dancers hold ownership in the development of the movement as much as I do. That aspect in the process always creates a more confident and committed performance, in my opinion, as it is created for bodies in mind, in space, at that time. I used two catalysts within the research to navigate the process — shoulder pads and smiles.

Used since the 1930s, shoulder pads, which essentially create the illusion of having broader and less sloping shoulders, became essential to women in the workplace in the 1980s. The masculinized shapes were adopted by women seeking success in the corporate world and became an icon of women’s attempts to smash the “glass ceiling.” They became a power statement, bestowing the perception of status and position. The idea of women needing to smile in the workplace and beyond has been a more recent topic of discussion. There’s an expectation that women are only meant to be happy, pretty or passive in a crowd or conversation. Even worse, the belief that women would be “so much prettier” if they smiled has become regular language in our culture. This feeds the notion of entitlement that many men feel they have over what/how women should be. However, this concept is fairly recent. Into the 19th century, smiling women were often considered suspicious or sinful, and smiling was considered dangerous and degrading for women. This was due to sexist thinking about women’s supposed inconstancy and irrationality. So, when was the switch, why and who decides when it’s OK to smile?

ARTS ATL: This project has so many multimedia components. Could you describe them in more detail, and how do you envision visitors moving through The Bakery space?

Fishel: The gallery space will project three separate dance films, each with a different theme under the GRIN umbrella. A Polaroid film series was shot on location during the filming of the three screen dances and will be presented in space alongside of them. Separately, eight original pieces of vintage advertising related to the research will be hung in the gallery. Tactile elements such as shoulder pads and smiling face masks will live in the space as well.

ARTS ATL: The interactive element for the exhibit’s opening and closing is also exciting. Can you talk more about how you want audiences to play a role in the live performances?

Fishel: The idea is to give a piece of ownership back to the audience while creating a safe, experimental space for creating digital dance. There are so many out there who have an interest but are unsure of where to start, or do not have the resources to jump into making a dance film. This is a community-building exercise, and my hope is that many will come and not only interact with the dancers during that time but also with each other.

There will be two opportunities to experiment with film during the live performances: the opening reception on July 6 and the closing reception on July 13. Audiences can bring their phones or their cameras and truly break the fourth wall during the performance. They can travel 360 degrees around these dancers and test out close-up shots, wide shots, panning, angles. I will request that all of the footage be sent to me at the end of the week. I will edit it into an additional GRIN film. Each participant will receive a filmmaker credit, and it will be screened at a later date at The Bakery.

ARTS ATL: Why have the audience involved in filming?

Fishel: Not only is it an opportunity for those who want to experiment, test and play with the idea of digital dance and dance film, but it allows me to look through the lens of an outside spectator. What are they seeing in my work differently from me? What details are they noticing that are different from my expectations? It’s an exciting prospect.