Brian Donnelly, a.k.a. KAWS, blends high and low, art and biz, in “Down Time” at High Museum

Unraveling the art genome of Brian Donnelly (a.k.a. KAWS) would be quite an interesting endeavor. Based on “Down Time,” his exhibition mounted in several locations at the High Museum of Art through May 20, one can cite, for starters, Pop Art, Keith Haring, Walt Disney, R. Crumb, Jim Nutt, H.C. Westermann and Japanese manga.

Not immediately apparent is his student interest in William-Adolphe Bougereau, a 19th-century French academic painter whose work is today considered kitsch.

Donnelly, 36, is, as I wrote in an AJC review, a cultural magpie. He is also an American success story. The artist, who he says was second from the bottom of his high school graduating class in New Jersey, is now an international player who designs magazine covers, hangs with fashion photographers, cops solo exhibitions in museums and sells branded merchandise.

A brief history: after high school Donnelly was a graffiti artist before enrolling in the School of Visual Arts in New York as an illustration major. After graduating in 1996, he worked briefly at Disney Studios before inventing “Companion” — whose white gloves and abstracted ears are an homage to Mickey Mouse by way of anime — and discovering his inner entrepreneur. 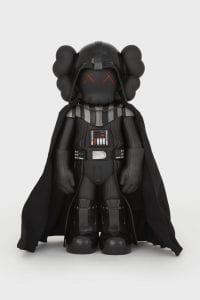 Using Companion as his signature character and commercial logo, much like Haring’s Radiant Child, Donnelly opened Original Fake in Tokyo — in the spirit of Haring’s store, Pop Shop — where he sells “Companion”-branded merchandise ranging from wallets and jeans to action figures such as the Companion-as-Darth Vader exhibited at the High.

The toys and even the large-scale sculpture on the plaza are amusing, though given that commodification is a rather worn-out theme, they strike me as little more than tchotchkes at various scales.

KAWS’ canvases offer more aesthetic sustenance. He is a skilled draftsman and painter. He draws the intricate compositions, and he and his assistants apply layers to create the flat planes of brilliant color that characterize the work, which toggles dynamically between flatness and depth, abstraction and figuration.

“Gone and Beyond,” a grouping of 27 tondos in the Wieland Skyway, is an encyclopedia of the artist’s motifs. The body parts that float in and out, including insouciant tongues reminiscent of the Rolling Stones’ logo, might allude to the safe violence of Saturday morning cartoons, just as the planklike forms in “Glass Smile” were inspired, he says, by images of the staves of exploding barrels in 1930s comics.

This work is enjoyable and skilled. It doesn’t demand to be taken seriously, and my personal inclination is to take it at its word. But then, I think about Mark Rothko fulminating about Pop Art in “Red,” the play that’s running at Theatrical Outfit through March 11.

“You really think Andy Warhol will be hanging in museums in a hundred years alongside the Bruegels and Vermeers?” he says. The line gets a laugh.

For Rothko, Warhol was the barbarian at the gate. KAWS is already in the house. Far be it from me to prophesy whether “Down Time,” the painting the High has acquired, will hang with Warhol, let alone Vermeer, or end up in storage.