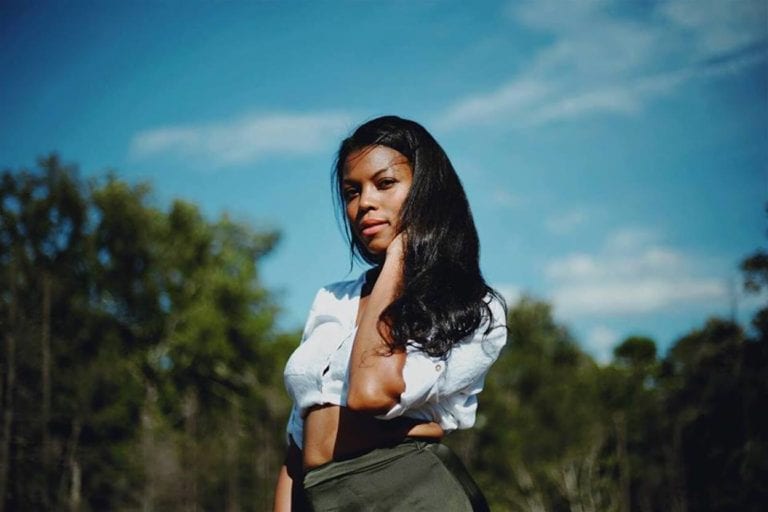 Brenda Nicole Moorer is an Atlanta-bred artist, vocalist and arts educator who combines elements of folk, jazz and soul music — soft indie folk vocals swing in perfect harmony with the vibrancy and high-paced energy of classic jazz. Lyrically, her songwriting is inspired by the community and everyday life. Moorer’s soul folk sounds can be heard live at Buteco on February 23.

The new year brings new content for Moorer as she works toward releasing what she considers her biggest project yet: a collaborative work with 25 artists that explores jazz through a concept album and short film titled The Marrow, set to release this fall.

Moorer fell in love with Billie Holiday and Natalie Cole from an early age, setting into motion her passion of American jazz. At the same time, she also felt drawn to the indie folk sounds of Fiona Apple and Fiest. She’s performed at the Atlanta Jazz Festival and received a master’s degree in arts management from SCAD University.

Her voice and style boldly capture the heart of Atlanta, infusing musical elements that reflect the city’s diversity and jazz roots. ARTS ATL sat down with the soulstress to discuss her upcoming works, influences and more.

ARTS ATL: What was your first memory of playing music, and what drew you to songwriting?

Brenda Nicole Moorer: The earliest memory I have of playing music is my first public performance playing guitar and singing original songs at 7 Stages Theatre in Freddie Hendricks Youth Ensemble of Atlanta’s holiday production. The song was called “Space.” It was a really esoteric song about forgiveness. I have always been an empath, and from an early age I found that songwriting helps express my emotions. I also write about what I witness in the world around me.

ARTS ATL: Was this memory something that influenced your decision to combine elements of folk, soul and jazz into your sound?

Moorer: Absolutely. From an early age, I was drawn to jazz vocalists like Bille Holiday and Natalie Cole, and at the same time, I fell in love with indie folk pop artists like Fiona Apple and Feist. Ani DiFranco is the sole reason why I begged my parents to buy me a guitar. I wanted to write and play like her — express all these feelings I had.

ARTS ATL: What are you working on as far as future albums and projects?

Moorer: I’m actually working on my biggest project undertaking thus far — it’s a collaborative work with 25 artists exploring jazz, and the culminating project is a concept jazz album and short film titled The Marrow. I’m really proud of the project and proud to bring so many Atlanta jazz artists together. This is a large-scale work and is taking major resources to produce.

The project has been fiscally sponsored through Fractured Atlas in New York. This allows me to be able to manage the project like a nonprofit and accept individual donations, government grants and foundation support, all of which are tax-deductible to the extent of the law. Without my time at SCAD, I probably wouldn’t know how to manage a fiscally sponsored project.

The plan is to have the full funding by end of March to release the project in early fall. To date, it’s the thing in my career I’m most proud of. Anyone interested in contributing, please email me at brendanicolemoorer@gmail.com.

ARTS ATL: What was it like performing at the Atlanta Jazz Festival? Do you have plans to perform at future jazz events?

Moorer: It was a dream come true. I had sung at the festival with other groups in the past, but it was a goal of mine to perform my own original music. I was on cloud nine for a least one month after. I am grateful for the opportunity and felt like the work I have been putting in the past 10-plus years paid off. I will have several performances coming up over the next three months, including a jazz concert of my originals and some of my favorite standards. I plan on performing a lot more of my original jazz this year.

ARTS ATL: What inspired the beautiful stop-motion music video for “Bloom,” and how long did that take to make?

Moorer: I’ve always been fascinated with film and loved stop-motion. I wanted to collaborate with an artist that could connect with the music and execute the idea. I enlisted the help of artist Nim Ben-Reuven, and he went to work. Nim was incredible with executing the idea, and he actually handcrafted everything in the video. The song speaks to the continual unfolding of who you are and never giving up on your dreams.

ARTS ATL: What motivates you to write and perform music?

Moorer: Everyday life. Some days are less inspiring than others, but I can always find something that’s interesting in the world around me. The hard part is tapping into the energy to get the right words to express it. For that to happen, I try to just ground myself, meditate and open myself emotionally to receive. I think the best lyrics come from feeling. Performing is unlike anything else I’ve experienced in my life. It really is a unique exchange between you and the crowd, and it brings me so much joy.

ARTS ATL: What are your five major musical influences? Tough question, I know.

Moorer: That is tough! I’m influenced by every artist, human, place, surrounding, event and anything that I encounter. I think all artists are influenced by life itself. There’s this saying that goes, to be an artist is to be in love with life. So, I definitely feel like my influences are wide and varied. But, if I have to choose from my early beginnings, I’d say Billie Holiday, Ani DiFranco, my grandfather’s ’60s group The Esquires, Amel Larrieux and Natalie Cole.