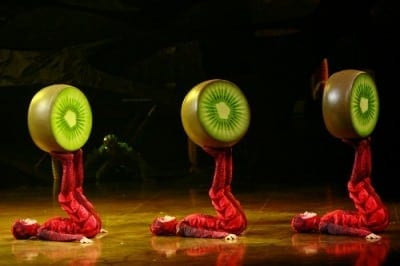 Cirque du Soleil is giving away four free tickets to its spectacular show “Ovo,” which is playing its final week at Atlantic Station through Sunday, January 2, exclusively to readers of ArtsCriticATL. We have two tickets to the 1 p.m. show and two tickets to the 5 p.m. show, both on January 2, so there will be two winners of the contest. All you have to do is answer five simple (sort of) trivia questions about Cirque du Soleil. Then email your answers to ovogiveaway@gmail.com. (Don’t post them as a comment!) The first person with five correct answers will get his or her choice of show times. In the event that no one gets all five answers, tickets will be awarded to the people with the most correct ones.

The deadline is 4 p.m. Tuesday, December 28, so time is of the essence. Tickets will be awarded at that time. You must, must, MUST include a phone number and email address in your entry so the Cirque folks can contact you directly about your tickets.

Cirque has been coming to Atlanta since the early 1990s. “Ovo” opened at Atlantic Station on November 4 and has been seen by more than 150,000 people so far. It’s Cirque’s most enjoyable show to play here in years, with a light story line that actually makes sense (forgoing some of the Cirque-y symbolism that can get pretentious), great music and perhaps the most dazzling costumes ever. 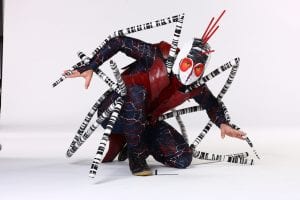 Cirque’s 25th production is set in an insect-only ecosystem, populated by more than 50 acrobats and dancers playing crickets, lizards, butterflies and praying mantises. The main characters are Ladybug, a roly-poly bundle of glee; Foreigner, a fly who arrives in the buggy community and becomes smitten with Ladybug; and Master Flipo, chief of the insects. The fly brings with him a huge egg, the titular Ovo, which gets passed around, joked about, ooed and cooed and fought over. As the insects hop, flutter, climb and wiggle around the huge stage, the acrobatic acts are woven in. For the finale, about a dozen performers in skin-tight green lizard suits use trampolines to run straight up the vertical face of a 25-foot wall and perform stunts.

1. How many tracks are on the “Ovo” soundtrack CD?

2. Which of these is NOT the title of a Cirque show?

3. What was the name of the first Cirque show to play in Atlanta?

4. Which Cirque production features a giant snail and a big baby?

5. Who designed the insect costumes for “Ovo”?

Remember: This contest is exclusive to loyal readers of ArtsCriticATL. You must email entries to ovogiveaway@gmail.com by 4 p.m. December 28 to qualify. We will publish the answers and the names of the winners on the site later this week. Have fun, but please play this game responsibly. And happy holidays.