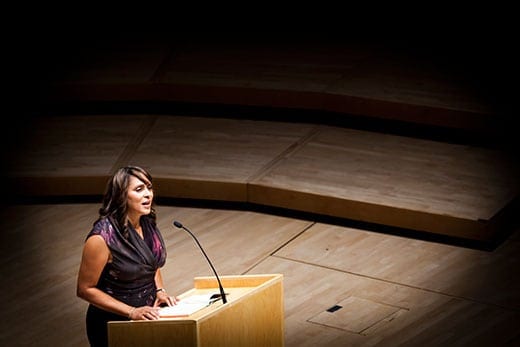 Former U.S. poet laureate and Emory professor Natasha Trethewey has been awarded the 2016 Academy of American Poets Fellowship for distinguished poetic achievement. The annual fellowship — the first of its kind in the United States — was established in 1946 in memory of Pulitzer Prize-winning poet James Ingram Merrill.

Fellows are nominated and elected by a majority vote of the Academy’s Board of Chancellors. Past recipients include Gwendolyn Brooks, Robert Frost and Ezra Pound. “Natasha Trethewey’s poems plumb personal and national history to meditate on the conundrum of American racial identities,” says Academy of American Poets Chancellor Marilyn Nelson.

“Whether writing of her complex family torn by tragic loss, or in diverse imagined voices from the more distant past, Trethewey encourages us to reflect, learn and experience delight,” Nelson says. “The wide scope of her interests and her adept handling of form have created an opus of classics both elegant and necessary.”

Tretheway plans to use the fellowship and its accompanying $25,000 stipend to work on another book of poems and finish her memoir. The fellowship, she states, is “a wonderful vote of confidence.”

Trethewey, who is Robert W. Woodruff Professor of English and Creative Writing and director of the Creative Writing Program at Emory, was the U.S. poet laureate for two terms beginning in 2012, when she was also named the poet laureate of the state of Mississippi. In 2013 she was inducted into the American Academy of Arts and Letters. She is author of the Pulitzer Prize-winning poetry collection Native Guard (2006), which Atlanta’s Alliance Theatre adapted for the stage as part of the National Civil War Project. Her other collections include Bellocq’s Ophelia (2002), Domestic Work (2000) and Thrall (2012). Trethewey is also the author of a book of creative nonfiction, Beyond Katrina: A Meditation on the Mississippi Gulf Coast (2010).

Her fellowship is an addition to an impressive list of professional honors she’s been awarded, including fellowships from the National Endowment for the Arts, the Guggenheim Foundation, the Rockefeller Foundation Bellagio Study Center, and the Bunting Fellowship Program of the Radcliffe Institute for Advanced Study at Harvard.