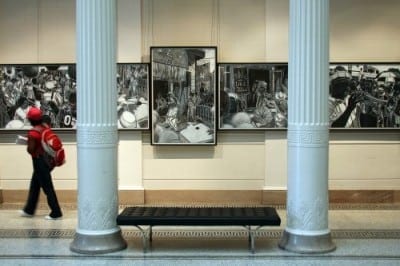 Art lovers who had considered traveling to New Orleans this November for Prospect.2 — the second installment of the hugely successful international contemporary biennial — will have to postpone their plans. Due in large part to the current economic conditions and decreases in funding for the arts nationally, U.S. Biennial Inc., the organization that produces Prospect New Orleans, announced today that it has elected to postpone Prospect.2 by one year. The biennial is now scheduled to be on view November 5, 2011, through February 3, 2012. According to Dan Cameron, founding director for U.S. Biennial and artistic director for Prospect New Orleans, who came to speak at The Contemporary in Atlanta last October, “We have fallen behind schedule in meeting our fund-raising goals. Realizing that going forward would put a strain on the organization and our partners in the community, we have decided to focus our efforts in 2010 toward developing a strong financial footing that will allow us to fully realize our ambitions for Prospect.2 in 2011.” An announcement of the participating artists was to have been made this April. Biennial officials stress that despite the delay, plans for Prospect.2 remain unchanged.

The biennial will include the work of 60 artists — local, national and from more than 20 other countries — in 20 sites throughout New Orleans. Many of the world’s most promising and/or recognized artists continue to develop major new projects that will now premiere in 2011.