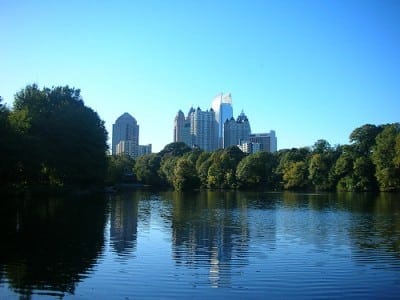 After a bit of a financial dry spell, Georgia Shakespeare’s Shake at the Lake is coming back to Atlanta’s Piedmont Park in May. On the verge of opening its 25th season, the theater announced Wednesday that Bank of America has come through as sponsor of the evocative, al fresco happening. (After running for four years, the 2009 event was canceled because the theater couldn’t afford it.) Happily, John Dillon’s free-form “A Midsummer Night’s Dream” — first seen last summer at the Oglethorpe University theater — will run May 5-9 on the pier at Lake Clara Meer. In Dillon’s inventive staging of “Midsummer,” the potion-laced farce is framed by the backstage shenanigans of a bunch of contemporary buffoons. Tickets are free.

In a press release, producing artistic director Richard Garner also cited the Coca-Cola Company, CornerCap Investment Council, the Kendeda Fund, the Charles Loridans Foundation and the Piedmont Park Conservancy as contributing angels. “Without their philanthropic vision and earnest interest in the arts in our city, Shake at the Lake would not be possible,” Garner said.

You have to admire Georgia Shakespeare’s tenacity. On opening night of the 2004 inaugural event, a sudden downpour threatened to rain on the parade. But the troupers didn’t wilt. Founded as an outdoor ensemble, they improvised a tarp-tent, and the show went on. If you are a picnic-on-the-lawn kind of person, watching Shakespeare from Piedmont Park’s sunken-garden setting can add heady perfume to a spring evening. Here’s the ticket protocol: They are distributed on a first-come, first-served basis on the day of performance, beginning at 10 a.m. from the Piedmont Park Visitor Center and from Georgia Shakespeare’s box office at the Conant Performing Arts Center at Oglethorpe University. For more information: shakeatthelake.com or gashakespeare.org, or call 404-264-0020.

Brad Sherrill’s “The Gospel of  John” runs in repertory with the world premiere of his new piece, “Prophets,” March 24-28.