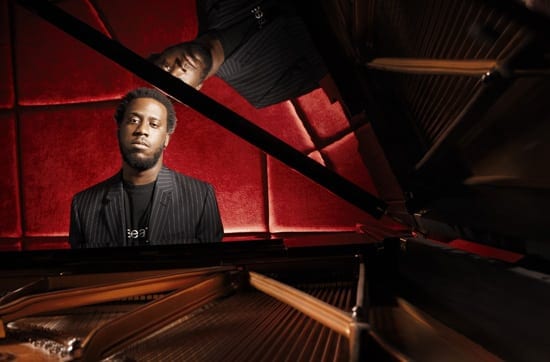 Pianist Robert Glasper will be among the headliners at this year's Atlanta Jazz Festival.

Mace Hibbard, an Atlanta-based saxophonist, local trumpeter Melvin Jones and area singer Laura Coyle will play on a separate International Stage during the event, which starts May 26. Glasper also has a local connection; Atlanta-based saxophonist Kebbi Williams is part of his band. (For the complete list of performers, visit www.atlantafestivals.com.)

In addition to the performances in Piedmont Park, the Atlanta Office of Cultural Affairs has set up three Neighborhood Jazz Series concerts at parks around the city, as well as a Kickoff Cabaret on May 25 with pianist Johnny O’Neal and a ticketed late-night jazz jam on May 27, both at the Loews Hotel in Midtown. Throughout May, the office will also try to bring attention to local musicians playing throughout the city with its 31 Days of Jazz program. To highlight the jazz musicians of tomorrow, more than 10 youth jazz bands are competing in April for three spots on the festival stage. It is billed as the biggest no-cost jazz festival in the nation. This year it is funded by corporate sponsorships from Coca-Cola, Chick-fil-A, the Cartoon Network and Publix, as well as support from private donors and the city of Atlanta.

The breadth of the international acts, both new generation and old guard, highlight the festival’s place on the national scene. Chestnut, who has performed twice at the festival, says the Atlanta concerts are a major presence in the jazz world. In a recent telephone conversation, the pianist said he will bring either his trio or a quartet to the park on Saturday, May 19. The group will play new music that was premiered at Dizzy’s Club Coca-Cola in New York earlier this year.

“The Atlanta Jazz Festival has always been one of the signature festivals in the United States,” Chestnut said. “I’d put it up there along with the Montreal Jazz Festival and even some European festivals.”

Hibbard, who first appeared at the festival as a winner of the now-defunct Future of Jazz competition in 2008, appreciates the festival because it creates a local buzz about the music. For at least a few months after the concerts, Atlantans are more likely to venture out to clubs and restaurants in the city to hear live jazz. “Having a jazz festival just keeps it in the audience’s mind that there is jazz,” the saxophonist said. “Just that trickle-down effect helps local musicians, because then people might think, ‘Oh, we should go hear some jazz.’ ”

The festival features a liberal range of jazz, from straight-ahead to R&B-tinged. Hibbard said that at some level, it doesn’t even matter what the organizers program, because any event in Piedmont Park is worth attending. “I think the idea of a jazz festival as entertainment is exciting to even people that don’t necessarily go and listen to jazz on a regular basis,” he said. “It’s a reason to take your family out to Piedmont Park on a nice day, and there’s all sorts of stuff going on.”

The Atlanta Jazz Festival began as a small event in 1978, under the watch of then-Mayor Maynard Jackson. In a speech early that year, Jackson said that one of his goals was to “make the city of Atlanta a leader in the promotion of jazz as a vital cultural form.” He hoped to do this by offering free or low-cost concerts by national musicians, highlighting Atlanta-based artists and sponsoring jazz workshops.

Over the years, enthusiasm and monetary support for the festival have come and gone. In the late 1980s, Rob Gibson, who now runs the Savannah Music Festival, brought jazz legends to Atlanta for a memorable series of concerts. In 2008, after the city pulled its support of the festival, the organizers held intimate shows downtown in Woodruff Park.

Camille Russell Love, who has run the Office of Cultural Affairs since 1998 and has seen financial support for the festival fluctuate, said that sponsorships are now on the rise and private donations are coming in, and she’s hopeful that the festival can at least stay at its current level. “I would just say that next year on Memorial Day, there will be a festival in Piedmont Park. It will be three days of great jazz,” she said. “We’ll present the best festival that we can afford; that’s our objective.”