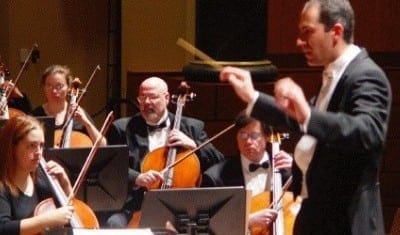 Change is coming to the Cobb Symphony Orchestra, a semi-professional ensemble founded in 1951 and based in suburban Kennesaw, Georgia.

This week the CSO named Bob Sanna as its new executive director, replacing Brian Hermanson, who served from 2007 until March of this year and left to take charge of the San Luis Obispo Symphony Orchestra in California.

Sanna, 72, founded the New York Philharmonic Free Concert Committee of Long Island and was its chairman for 10 years. The concert is billed as Long Island’s largest public event. Sanna won several media awards in his career in advertising, as president and creative director of New York’s Sanna Mattson MacLeod, from which he retired in 2003.

In an email message, CSO music director Michael Alexander called the recruitment of Sanna “the hardest search I have ever been a part of. We were very particular to make sure we got a person that we felt could help us make the next leap as an organization and fit with our complex needs including managing our youth programs (Georgia Youth Symphony), Chorus, and Jazz initiatives.”

Alexander also noted that the search means the orchestra will “have improved both by getting a proven leader [with] a vision for our role in the community and also by examining our own structure and organizational strategies.”

In a statement, Sanna said: “The level of musical excellence displayed by the CSO is remarkable. The whole organization is filled with energetic, passionate people, and I can’t wait to dive in and try to help continue its expanding service to our community.”

“When the search committee first met, we laid out a wish list of characteristics of the perfect executive director,” said Todd Youngblood, chairman of the orchestra’s board of trustees. “Bob fits that description and, in fact, exceeds it in all kinds of ways. I’m really excited about the enthusiasm and skills he brings to us.”

In a 2009 review of the orchestra’s performance of Mahler’s 80-minute Second Symphony — a cosmic meditation on death and rebirth — I wrote that the Cobb Symphony “has come a remarkable distance in the decade I’ve been hearing them. Its annual budget is now just under $1 million, and it employs 21 core musicians for every concert — mostly section principals — and, depending on the repertoire, beefs up the forces with local free-lancers, church musicians, academics and other skilled musicians looking for an inspiring symphonic outlet. Major works like Mahler’s Second, in a convincing performance, help keep everyone satisfied and eager for the next challenge.”

Sanna’s job, at least initially, will be navigating the sour economy to keep that musical ambition aloft. With his advertising acumen, he might be expected to boost local awareness of the CSO, accelerating the band’s upward spiral.