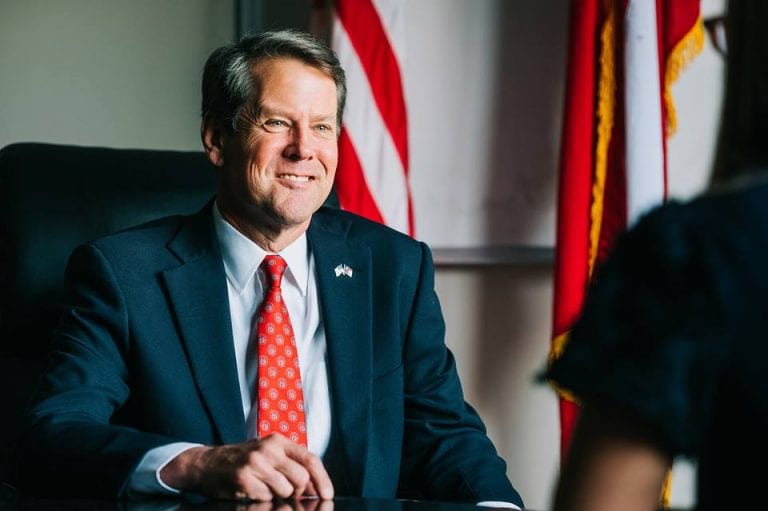 “There are over 20 productions shooting in Georgia. Is the entertainment industry willing to support the economy of a totally corrupt state that suppresses democracy; where the winner isn’t the best choice for the people but the best schemer or crook?”

It was retweeted over 14,000 times, and many took it as a call for a boycott of Georgia’s film industry — an industry that, according to the Georgia Film Office, had an economic impact on the state of $9.5 billion from July 2017 to June 2018, with over $2 billion in direct spending.

Kemp seemed unworried and assured Georgians in a press conference that he would continue to support the film tax credit and do what he could to protect it. But that hasn’t provided much comfort to the film industry locals who live and work here, as Kemp has also promised to codify the Religious Freedom Restoration Act into law during his tenure. The RFRA, a piece of legislation heavily criticized by Hollywood heavy-hitters, would allow businesses and business owners to refuse service to same-sex couples on the basis of religion.

Georgia’s General Assembly has already passed the act once, only to see it vetoed by Governor Nathan Deal. A similar law passed in North Carolina in 2016 that contributed to film companies such as Lionsgate pulling productions out of the state.

The stakes are high, as Georgia’s now considered the new hot spot for film and production.

According to data published in 2016 by the Georgia State University Fiscal Research Center, film industry employment in Georgia grew by 62% from 2009 to 2014. GSU also noted in its report that film industry employment “was generally higher than the average growth rate for all Georgia industries” following the introduction of the tax credit. It was, according to the report, an industry that even continued to experience a high rate of growth through the Great Recession.

Despite the fact that authors of the report note that “it is not clear whether the relatively robust performance of the film and video production industry over this period can be attributed solely to the establishment of the film tax credit,” it is clear that bringing film to the state has allowed many people in Georgia to go full-time with their side jobs and make a real, mortgage-paying living as make-up artists, costume designers, prop suppliers, light directors, extras and production assistants.

And according to data provided by the state’s Department of Economic Development, bringing film and TV to Georgia has generated over 90,000 jobs.

Maren Johnson is a set dresser in Atlanta who’s worked in the film industry for four years. She came to Atlanta out of college looking to get in on the film boom, and she now depends on it as her main source of income. As a member of a film union, she also relies on it for health insurance.

Johnson says she and her industry friends “would all be in the position of having to find a new career if we choose to stay in the state” should a boycott — either as a result of voter suppression allegations or the RFRA — take place.

“I’m fairly nervous,” she says, “because I get the impression that politicians underestimate how serious [film industry] people are — it happened in North Carolina, and the following boycott coupled with the loss of the film tax credit completely killed the film industry in the state.”

In 2016, many film and television productions pulled out of North Carolina as part of a boycott to the “bathroom bill” that many saw as discriminatory against the LGBTQ community.

Elizabeth Johnson (no relation to Maren), is a full-time camera operator. She has similar fears.

“If North Carolina is any indication, Atlanta will dry up fairly quickly,” she says. “Hollywood is serious about taking its business elsewhere if it feels it has to. Detroit, Miami, Wilmington are all cities that once boomed but are comparatively now like ghost towns for film industry workers. And most of those people have moved to Atlanta.”

Since coming to Atlanta from Los Angeles in 2012, Elizabeth says she’s worked “non-stop,” going from full-time show to full-time show for the past six years thanks to a thriving production industry. She recognizes what Georgia stands to lose should film and television leave town.

“Every film employs hundreds of workers making anywhere from $1,000 to $3,000 per week — on average, some much higher — and there are usually 20 to 40 projects happening at a time,” Elizabeth says. “All of that money is going right back into the Georgia economy via the worker-turned-consumer. Not even mentioning the hotels we completely book up when we need, the food catering services we use, the car rentals.”

Many of Georgia’s film workers say there are alternatives to a Georgia boycott should a religious liberty bill become law. And Stacey Abrams, who was narrowly defeated by Kemp in the governor’s election, has asked that the industry stand behind the thousands of Georgians who now rely on the film industry for income.

“There are positive ways to bring change and make points that don’t hurt innocent workers and their families, as opposed to taking away an industry from the state,” says Elizabeth Johnson.

She stands firmly against the boycott and says it would do more harm than good. “I am happy that my industry can throw its weight around and demand people treat others with fairness and equality — though it’s by no means a perfect entity, either,” she says. “But, I love it here. This is my home. I have actually purchased a home in Atlanta and am one of the few people my age [29] able to do so, all because of this industry here.”