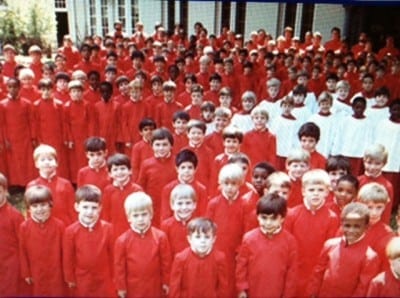 Last month, the Atlanta Boy Choir (ABC) asked for the resignation of its artistic director, David White. I’d heard White and the choir perform just a couple of times over the past eight years, and wasn’t especially impressed with the results — not a poor performance, by any measure, but below the national standards set by other Atlanta groups such as the Spivey Hall Children’s Choir. (I think it was Robert Shaw who, with a fundamentalist’s zeal, proclaimed, There are no bad choirs, just bad choirmasters.)

In reporting a 1-A story for the AJC, I spoke with more than a dozen people — David White, parents, professional musicians, board members (many are alums or parents of boys who sing in the choir) and local arts leaders — to help put the matter in perspective.
For his part, White (at left) is unapologetic about the situation. He said as much when I asked him directly if there was anything different he’d have done, given the fact that the choir is $250,000 in debt, he’s now out of a job and many in the boy-choir community feel traumatized. Nope, he said, all fault lies with the board.
Several board members, to their credit, accept the board’s asleep-at-the-wheel handling of the looming financial crisis. But they still maintain, as ABC treasurer (and professional oboist) Tom Underwood puts it, that it’s an essential part of the artistic director’s job to “run the daily operations within the organization’s resources. The board provides oversight, guidance and development.”

Without taking sides in the ABC dispute, arts leaders around town concur with Underwood, to a point.

The boy choir’s public bickering “is corruptive to all sides, and to the community,” says Atlanta Opera board chairman Gregory Johnson, who’s credited with engineering a leadership transition at the opera and calming disputes that may have come out of that change. “The board’s primary obligation is to support the artistic mission — and fund-raising is key — hand-in-hand with artistic direction that’s financially responsible.”

Haven’t we seen this pattern before? An artistic leader, usually a conductor, has done yeoman service for a venerable arts organization but, in all likelihood, has hit a career ceiling and isn’t likely to get as prestigious a job elsewhere. He hunkers down, fuels a partisan divide, refuses direction from the administration or the board, and then — inevitably — the whole thing unravels. Everyone ends up looking bad.
If past experience is a guide, the organization and the board go through some soul searching and usually survive. It is the conductor, now pegged as “fiscally irresponsible” or “hard to work with,” who takes the biggest hit. Who will hire this sort of conductor? Who will donate money to his organization?
So now what? The Atlanta Boy Choir is currently auditioning artistic director candidates that are, as board member (and alum) David Davis told me, “world class in every way.” There’s a chance that the retired ABC director, Fletcher Wolfe, who led the choir for 43 of its first 50 years, will return as a one-year interim director, till the permanent new chief is in place.
Meanwhile, The Georgia Boy Choir, the rival group that some parents and White are setting up, has a nice website but as yet no confirmed singers or events. Do they have 501(c)3 non-profit status to handle the contributions necessary to sustain them?
Several dates that White arranged for the coming season, such as a Christmas performance at Peachtree Road United Methodist Church in Buckhead, have been removed from the Atlanta Boy Choir’s schedule and transferred to the Georgia Boy Choir’s tentative calendar.
Asked about this, White responded: “It’s presumptuous for [the Atlanta Boy Choir] to think they own concert dates or control access to the parents.”