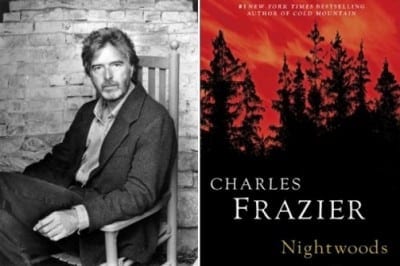 The murderer on the loose in Charles Frazier’s latest novel, “Nightwoods,” reminded me of one of the crazed killers Truman Capote wrote about in “In Cold Blood.” Frazier’s story, however, is only superficially about a killer’s blood lust and more sincerely a love song to time and place. The time is the 1960s, a century past the Civil War era that is the setting of Frazier’s outstanding first novel, “Cold Mountain,” winner of the National Book Award, and much beyond the period of “Thirteen Moons,” his second, which was published to mixed reviews. “Nightwoods” is a smaller book than either of those, less detailed and more limited in scope, but it too projects the author’s nostalgia for an earlier America and his feeling for the beauty of the Appalachian Mountains, where he has always lived.

The sense of time’s passage is manifested in the form of a decaying lakeside lodge that “at the edge of the previous century … had been a cool summer retreat for rich people escaping the lowland steam of August … something along the lines of the Old Faithful Inn, though smaller and more exclusive.” The steward of this past is a withdrawn loner named Luce, who takes a job as caretaker of the desolate property. She, like the writer himself, seems to feel some responsibility to care for this specific locale of American and North Carolinian and Indian history, the lodge still studded with century-old artifacts, wine bottles and the belongings of vanished guests. An ancient radio playing jazz is Luce’s only contact with the outside world.

As the novel opens, her isolation is breached when the state makes her guardian of her orphaned niece and nephew. She accepts the pair of mute, emotionally troubled children as her duty, despite claiming to feel little for them. Their refusal to communicate, she presumes, arises from their having been abused or having witnessed atrocious acts of domestic violence, which ended in her sister’s murder by a psychotic second husband. Emotionally muted herself, Luce tolerates every instance of the children’s misbehavior with stoic patience and little expression.

She is such a committed recluse — attuned to the natural world but morosely cut off from the realm of human feeling — that it comes as a surprise, despite the information Frazier has inserted here and there, that she is not the middle-aged spinster she appears to be in our mind’s eye. When Stubblefield, grandson of the hotel’s dead owner, arrives in town to deal with his inheritance and finds himself drawn to her, we realize that Luce is actually a pretty young woman. It jars our sense of who she is when Stubblefield recalls her parading around in a swimsuit at a beauty pageant in the not-too-distant past, and makes her more compelling than the sexless figure she has become. More or less predictable factors have pushed Luce to put her heart into cold storage: abusive, alcoholic parents and her rape by a respected adult.

Frazier’s handling of his characters is remarkably uneven. There is Luce’s subtle and transcendent rapport with the landscape, which one might assume grows out of Frazier’s own response to his native mountains, where he has said he goes running 360 days a year, noticing minute changes of light and season. And there is Stubblefield, a well-meaning, decent, quiet fellow on the page, not a riveting character but at least one whose humanity is convincing. On the other side are the bad characters, who appear to be ripped out of the yellowed pages of pulp fiction.

Bud, the killer, is acquitted of his wife’s murder but sets off in pursuit of her children, suspecting they know where she stashed a pile of his stolen money. His suspicion seems arbitrary and unfounded, a device to set the plot into motion. When Bud discovers the community where Luce lives, closing in on his prey, he strikes up an odd friendship with Lit, a lawbreaking deputy sheriff, long given to abusing the power of his position.

Frazier slips in and out of the introverted tale of Luce and the children, intercutting it with Bud’s violent adventures. In this way the author hurtles us between narrative planes that seem unconnected to each other, Luce’s story lacking the compulsion of a dominating, fully feeling character and Bud’s driven by the passions of a caricature bandit. Though Frazier sometimes manages to insert us into a criminal psyche, to show how the victimizer pities himself as a victim, Bud’s fantasies about spilling blood, his sheer unexamined craziness, plunge us into the territory of dime novels.

“Nightwoods” is a story greater in its parts than as a whole. Frazier’s blunt sentence fragments, so different from the stately writing of his earlier novels, sometimes jam with the propulsive power of poetry, its jagged rhythms creating an aura of modern romance.