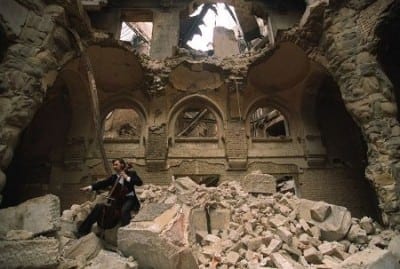 Review: The strongest defy the atrocities of war in a novel shorn of ethnic labels

THE CELLIST OF SARAJEVO

There are Bosnian bakeries in Gwinnett County selling pastries filled with meat and spinach, and breads that taste like the bread back home, before war came and pulled people up by their roots and turned them into refugees the United Nations dispersed across the rich countries of the world. I recently met a Bosniak woman (as Bosnian Muslims are known) who works for a refugee assistance agency in Atlanta, helping newly arrived women find work in local factories. The same agency helped her family resettle 15 years ago. Now the family is an American success story: they own their own home, and the eldest daughter has just won a full scholarship to college.

And yet when Admira (not her real name) talks about the past, about how she came to the United States, the pride of her American success slips away and the old, terrifying Yugoslav war seems to batter at her heart. She squints away tears. Her powerful voice shakes and she falls silent.

Her husband was captured as they were fleeing their city, Brcko, when the Serbs invaded in 1992. All the Muslims were leaving town, heading to outlying Bosniak villages for refuge. The Serbs said her husband would only be used for labor. He was taken to a detention camp in Srebrenica, the site of a later massacre that left more than 8,000 Muslim men and boys dead. Miraculously, her husband was returned alive a month after his capture. The Serbs traded him back for two of their dead soldiers.

It was a time when “dead bodies were like gold,” Admira remembers. They could be bartered with. So the villagers gathered and carefully stored the corpses of Serbs killed on their territory. More valuable was to keep enemy soldiers alive. It was the best chance of having something to trade for one of your men.

Steven Galloway’s extraordinarily moving book about that war, “The Cellist of Sarajevo,” describes what it feels like to live in a city under attack probably better than any other book of our time. The siege of Sarajevo, a predominantly Muslim city, was the longest in the history of modern warfare, lasting from April 1992 to February 1996.

Strangely, there is no mention of Serb, Muslim or Croat in Galloway’s portrayal of a conflict that was essentially tribal slaughter. As Socialist Yugoslavia splintered into pieces, Serb aggressors used the term “ethnic cleansing” to describe their expulsion of Bosniaks and Croats from Bosnian territory they aimed to take over. People who had once lived together as neighbors, played together as schoolmates, were at one another’s throats in the name of their people.

Galloway, a Canadian who based his novel on interviews with Sarajevans, has stripped away the divisive particulars of identity — Serb, Muslim, Croat — to render the crushing human experience of living inside a war with as much honesty as a writer possibly can. Everyone is an individual first, a human being who has equal ability to choose between good and evil actions, he seems to say, and the ethnic label you wear neither condemns nor absolves you. You condemn or absolve yourself by your behavior. The novel is made up of the stories of three unrelated narrators, each living through his or her private nightmare in a city in ruins. The aggressors perch in the hills around Sarajevo, shooting down at the city without stop. We follow Kenan, a devoted family man, as he treks across town laden with empty water containers. An old brewery is one of the last places left to collect clean drinking water. Kenan, beleaguered, exhausted and fearful, makes the trip every four days, risking his life to sniper fire. Dragan, older and more isolated, having sent his wife and son out of the city to safety, similarly risks his life to walk to the bakery where he works and receives meals as his wages.

There are harrowing scenes during the men’s journeys through the city when they come to intersections and bridges especially open and vulnerable to snipers’ bullets. People literally run for their lives. How do you respond when someone needs your protection or help in such a situation? Do you always put your own survival above that of others? Do you put yourself aside? How can you?

Galloway starts with the need for basics in these ordinary men’s lives — water, food — to raise a profound moral question: “What does it mean to be human? To be humane?” The story is much more than graphic anecdotes or you-are-there realism; it is a meticulous inquiry into what makes our existence meaningful.

A young female sniper who calls herself Arrow is the novel’s most compelling and complicated character. She operates as a lone wolf, nominally under the control of the army defending the city. Numbed by her hatred for the men in the hills who have killed her police officer father and destroyed her old life, Arrow is also filled with remorse for the killing machine she has become. “There are dead among the living,” Galloway writes. Arrow, like so many others, is an emotional casualty of war, struggling to remember the girl she once was, in love with life, but thoroughly estranged from her past self. An assignment to protect the cellist from enemy fire subtly changes that. The cellist defies the soldiers in the hills, playing his instrument in the street outside his apartment building as a memorial to a group of innocent people who were killed on that spot, waiting in line to buy bread.

Galloway’s cellist is a largely symbolic figure, speaking to the power of art to stir what is best and deepest in people, to reawaken their capacity for goodness through its beauty. But he is based on the real cellist of the Sarajevo Philharmonic Orchestra, Vedran Smailovic, who played Albinoni’s Adagio in G Minor for 22 consecutive days as a requiem for 22 people killed by Serb mortar fire as they stood in a queue for bread.

Galloway’s novel is a brief, elegant masterpiece for the way he describes three people’s spirits dying and the way he weaves together the musician’s effect on Kenan, Dragan and Arrow, who never come to know one another but are moved by the music, reminded by it of the grace in themselves. It is the cellist who provokes them to reclaim their humanity, even if it costs someone his or her life.

At the height of the Yugoslav war, in 1994, UNICEF published “I Dream of Peace,” a book of pictures and writings by children of the former Yugoslavia produced as part of a trauma therapy program in refugee camps. A 12-year-old girl named Maida, from Skopje, wrote: “War is the saddest word that flows from my quivering lips. It is a wicked bird that never comes to rest.”

“The Cellist of Sarajevo,” published in 2008, about a war that ended more than a decade earlier, cannot become outdated, unfortunately, as long as conflict continues to ignite people’s worst instincts and the drive to subjugate others is prized as strength.