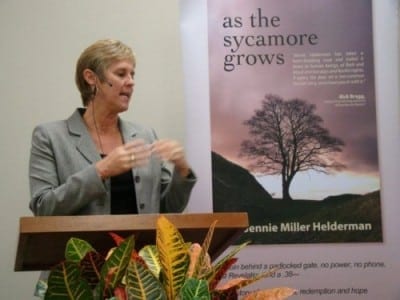 Review: “As the Sycamore Grows,” a gothic portrait of abuse and rebirth in the Tennessee woods

“As the Sycamore Grows”

Sometime during the years when Ginger McNeil lived in a cabin in the back woods of Tennessee with her two boys and abusive husband Mike, she sewed a square of white fabric into a head covering for herself. A head scarf was an outward sign of complete submission to her husband, she decided. It was her way of acknowledging that she bowed to his authority and would not question or fight him. Peace was the only goal she had in mind. If it cost her her free will, she was willing to pay that price rather than face the repercussions of resisting a domineering, belligerent man.

In 2005, writer Jennie Miller Helderman met Ginger in the course of researching an article about poverty. The article was an assignment for a class Helderman was taking with Pulitzer Prize-winning reporter Rick Bragg.

By the time Helderman encountered her, McNeil was a changed woman. She had cut her hair into a pageboy, carried herself with a breezy confidence and worked as an advocate for battered women.

She invited Helderman deep into the pine woods of Lutts, Tennessee, just north of the Alabama line, to show the isolation in which she endured the worst of her 17-year marriage. By her husband’s dictate, the family had lived like pioneers, without electricity or a telephone. Ginger had butchered hogs for food, made her own soap, and even fabricated her own sanitary pads from old baby blankets. Severe deprivation in addition to complete emotional control by her husband were the forms of her abuse, though she suffered physical battery as well. Mostly, though, it was the threat of violence that elicited her obedience.

Helderman’s initial article expanded over five years to become “As the Sycamore Grows,” a terse, plainly worded but deeply nuanced portrait of an abusive marriage. It has been an emotional and financial commitment for Helderman, who moved to Atlanta a few years ago and decided to self-publish the book. Not only does she give Ginger her say, but she describes her repeated meetings with Mike McNeil to try to understand his perspective. Helderman’s sense of fairness is echoed, remarkably, by Ginger, who also wanted her ex-husband to have a voice in the book. From this harsh, gothic tale of abuse, a generosity of spirit arises that is hard to fathom, but inspiring.

To understand what kind of woman would allow herself to be so victimized, Helderman ventures to Baycross, Texas, a small flatlands town with 43 churches, and finds that the context in which Ginger was raised there, in the 1960s and ’70s, explains a lot. Her father, Claude Mitchell, a foreman for Dow Chemical, ruled the family by the strict authority of the Bible. Her mother was equally severe. Home life demanded complete obedience from Ginger and her siblings. I had a strange sense, reading about the parents’ strict piety and belief in male supremacy, of how closely they might resemble fundamentalist parents in an Islamic country.

Yet Ginger, as portrayed by Helderman, seems to contain both the Apollonian and Dionysian strands of American character in herself. While the Church of Christ and her father taught her probity, the zeitgeist of ‘70s America — with its anthem of “If it feels good, do it” — held out secret temptations. In fact, Ginger destroyed her first marriage, to a teenage boyfriend, giving up her infant son in the process, by embarking on a series of sexual affairs. Helderman touches on this episode too briefly. The fact that a girl as sheltered as Ginger would seek liberation in extramarital sex says a great deal about the sway of individual freedom over the American psyche. Ginger’s early assertion of her sexuality might have helped us better understand the woman she came to be, or had always contained, bold and unafraid, when Helderman met her. 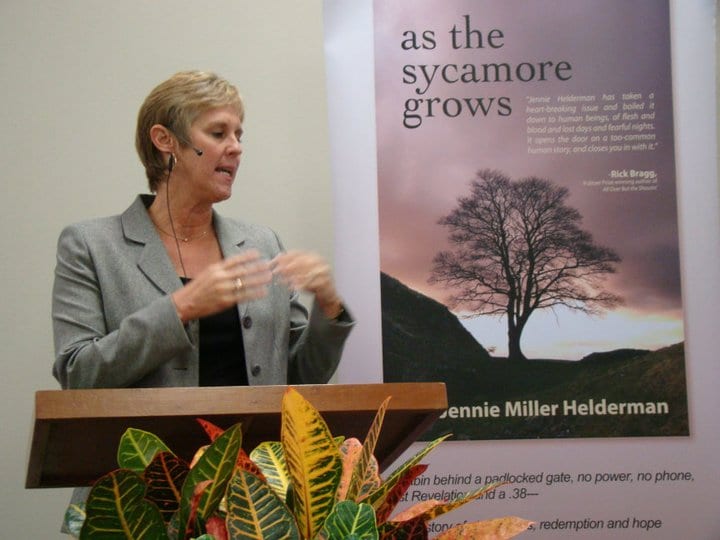 Ginger McNeil speaks at the Sheffield Public Library in Alabama in November.

Ginger’s second marriage plays out like a long purgatory as she and Mike spiral downward into increasing poverty and hardship. It hits bottom, they both appear to agree, with the death of Trent, Ginger’s teenage son from her first marriage. Though Ginger saw Trent only sporadically, he was beloved, and he dies under circumstances that stir up deep guilt in her. As Ginger herself said to him once, he was the “casualty” of her infidelities during her first marriage.

While Helderman’s prose is generally concise and restrained, it achieves an austere mastery in portraying Ginger’s confrontation with her son’s premature death. Her solitary journey from the squalid cabin in the woods to the boy’s funeral in Texas is an emotionally harrowing experience that the reader wants to turn away from like a torment, made all the worse by the very plainness of the language. There is no consolation for Ginger in husband or kin, no comfort for the reader in any flourish of words or sentiment. It is as unsentimental and unsparing an account of a child’s death and a mother’s grief as I have ever read. Once Ginger returns home to Tennessee, Mike responds to her paralyzing bout of grief by flogging her with a belt on Mother’s Day.

It comes as both a shock and a jolt of hope to read of Ginger’s abiding humanity toward her former husband. In part she feels some compassion toward him knowing that he was physically and emotionally abused by a vicious father. Long after her rebirth at a safe house where she seeks shelter with her two sons, after orders of protection are issued against Mike, after their divorce, she finds it in her to accompany him to a funeral that she hopes will help him lay his own demons to rest.