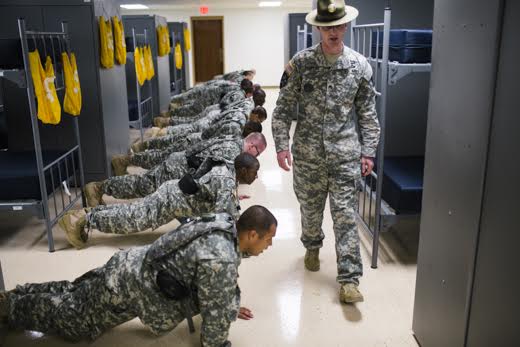 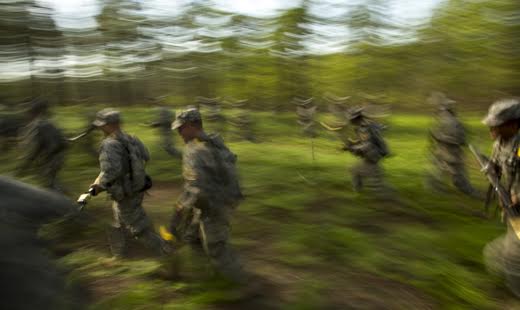 Recruits run through a forest section of Fort Benning during a team combat exercise. From Raymond Jones’ Birth of a Warrior.

Photographer Raymond McCrea Jones credits curiosity as the motivation behind most of his projects. A commercial and editorial photographer previously on staff at The New York Times, he explores humanity and its deviances in his personal work. In his newly released book, Birth of a Warrior: Ten Weeks in Basic Training (University of New England Press), Jones follows the lives of 162 young recruits during their first military training at Fort Benning, near Columbus. Photos from the book will be on view October 2-31 at the Arts Exchange as part of Atlanta Celebrates Photography.

Jones was never in the military. He was 8 years old at the time of the Gulf War and found it, he writes, “terrifying, shocking, and fascinating.” This project, however, does not document conflict. Writes Jones, “My goal was to turn the perspective in the other direction and examine the genesis… of a soldier’s beginning, the absolute birth.”

It took months of negotiation with the government and Fort Benning to pursue his project. Once he was granted permission, he had full access to the site, with the exception of a few areas restricted for safety reasons. Being able take the reader through every step of the young men’s grueling journey is what makes this work compelling. We follow their metamorphosis over two-and-a-half months, from their first haircut to their graduation ceremony. Upon their arrival, for example, recruits are taken through a 36-hour whirlwind that includes paperwork, instructional classes, uniform outfitting and medical screening. Though mundane, these photos are necessary to give us a feeling for the whole process. 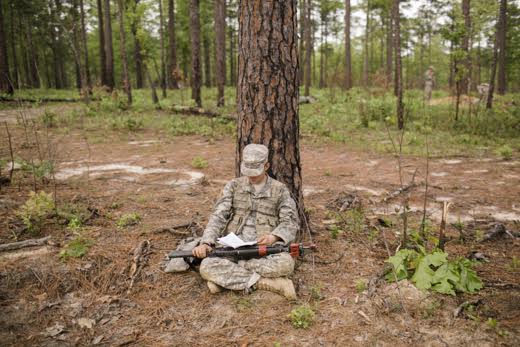 A recruit studies his notes while sitting under a tree in the forest during a multi-day field exercise. From Raymond Jones’ Birth of a Warrior.

Unlike most of his projects, this work is purely observational. He could not communicate with the recruits nor did he follow individuals because of time constraints and the intensity of the training. But Jones meticulously captions the images, which give the readers an additional layer of information.

The book is dense with images, and at times it would have benefited from tighter editing. As a result, the important turning points — the first time recruits receive their arms, for instance — fail to stand out. On the plus side, group action shots alternate effectively with shots of individuals in more vulnerable moments, such as when recruits make their first phone call home or when a sergeant lights up a cigarette in the dark after an excruciating day.

Overall, the book is an astonishing document of the “civilian-to-soldier” transformation of these men, an insightful and meaningful observation of a world most of us never see.