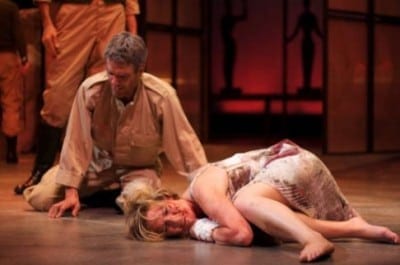 “Bear thou my hand, sweet wench, between thy teeth,” or laughing at “Titus Andronicus”

To scream, or to snicker? That is the question. And that was the challenge Georgia Shakespeare producing artistic director Richard Garner felt when directing the blood-soaked insanities of “Titus Andronicus,” which runs through August 2.
William Shakespeare’s first tragedy, and his silliest, “Titus” is a tsunami of gore that some literary historians assume was either a one-upmanship response to the bloody excesses of rival playwrights (like Christopher Marlowe), or a self-conscious joke. In “Titus” — spoiler alert! — rape happens, tongues and hands are cut off, and two characters are killed and baked into a savory meat pie that’s then served to their unwitting mother. Those are just the headline atrocities, folks. (Sarah M. Johnson as the ravished and mutilated Lavinia; photos by Jennifer Hofstetter.)
“The violence is so prevalent in the play, the audience can get numbed to it at some point,” Garner said last month, preparing to go into the rehearsal hall for the GaShakes production. “You will inevitably get laughs, and sometimes you don’t want that.”
Garner hoped to balance the gratuitous splatter of some scenes with situations, also bloody, that plumb deeper emotional levels. “There are a couple of moments where I want the audience to have their breath taken away,” he said. “Moments of tenderness. To do that, I think you have to give the audience other moments that are over-the-top.
“And some of it is so over the top, even the stage directions,” he adds. Like the part where Titus, having cut off one of his hands, and burdened with carrying the decapitated heads of two of his sons, asks his daughter Lavinia (whose own two hands have been lopped off) to carry his newly severed hand … in her mouth.
The only way to deal with such a scenario is a guffaw. “It’s just so ridiculous,” Garner says. So try to remember that the next time somebody declares, in another context, “Well, it ain’t Shakespeare.” Shakespeare wasn’t “Shakespeare,” either, sometimes.