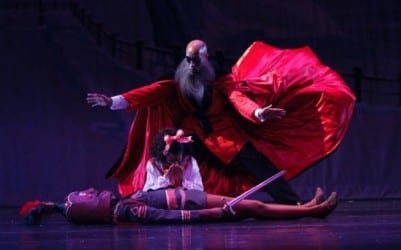 Presenting rich cultural variety with hints of playful showmanship, Ballethnic Dance Company opened its 18th annual production of “The Urban Nutcracker” last weekend at the Ferst Center for the Arts.

Choreographed by Waverly T. Lucas, “The Urban Nutcracker” offers a unique twist on the holiday tale. The company has changed the ballet’s traditional 19th-century European setting to a prosperous African-American community on Atlanta’s Sweet Auburn Avenue during the 1940s. To do this, it has adapted traditional “Nutcracker” characters into roles significant to life in this community. In place of the Sugar Plum Fairy is Brown Sugar; instead of the prince there is the Chocolatier; and Mother Ginger is replaced by Mother Spice, with her 25 tumbling Spice Drops. Additional production-specific characters include the Wild Flower, the Urban Gardener and the Coca-Cola Workers.

The company, known for its eclectic taste, has blended classical ballet with jazz, modern and ethnic dance inspirations to Tchaikovsky’s score with adapted music by L. Gerard Reid. “The Urban Nutcracker” is a colorful and whimsical journey, even if superficial at times.

The performance began with Big Mama, a resident of Sweet Auburn Avenue, reading “The Urban Nutcracker” storybook to her granddaughter. As the curtain rose, the tale came to life through the granddaughter’s eyes.

The party scene was endearing and humorous as Sarah and her brother Leroy (Clara and Fritz in traditional productions) scuffled and fought while their parents’ guests cavorted around the room. The party stopped to admire when Sarah’s godfather, Professor Isaac, presented the lifelike Reggae Rag Dolls and the toys, Sassy Sadie and the Sailor, whose fast duet was a showstopper. With a burst of energy, the Sailor flung Sassy Sadie around his body and over his shoulder. She was then carried offstage in a frozen straddle, like a doll when a child has positioned its stiff limbs.

The battle between the Queen Rat and her army was theatrically exaggerated with clawing and hunched saunters. Savery Morgan, in his fifth season with Ballethnic, wonderfully brought the Nutcracker Doll to life, depicting the jerky, taut walk and heroic nature that viewers have come to love.

The magical Land of Snow was warmed by the charismatic personality of the Snow Queen, danced by Nena Gilreath, artistic director and co-founder of Ballethnic. With romantic sentimentality and enthusiastic smiles, she partnered with Roscoe Sales. While en pointe, she would lightly release her neck to let him spin her around in a soft arch.

Act 2 began with the soulful celebration of Sarah reaching the Land of Sweets. Here she was presented with delicious treats while inhabitants came from all over to celebrate the Chocolatier’s return. Arabian partners were Regine Metayer, in her third season at Ballethnic, and co-founder Lucas. They captivated the audience with exquisite extensions and lifts. In one lift, Metayer, who was being held upside down, lowered her body perpendicular to the floor, which undoubtedly required excellent abdominal control. Immediately following their duet, Laila Howard, the lead in the Chinese Tea Dance, displayed her bountiful energy. She fiercely swung her leg up to touch her head on pointe and seconds later kicked her shoulder blades in a back attitude.

The buoyant Black Russians were a crowd favorite as they performed folk-inspired dance tricks with short ropes. Their constant high jumps were executed with appropriate stamina. Mother Spice and her Spice Drops followed a bubbly Coca-Cola pas de six. Like carnival performers, the Spice Drops turned flips and cartwheels. At times they would stop in place, stand on their heads and kick their legs into airborne splits.

Overall, though, Ballethnic’s “Urban Nutcracker” is a treat for those seeking a distinctive take on the classic holiday tradition.