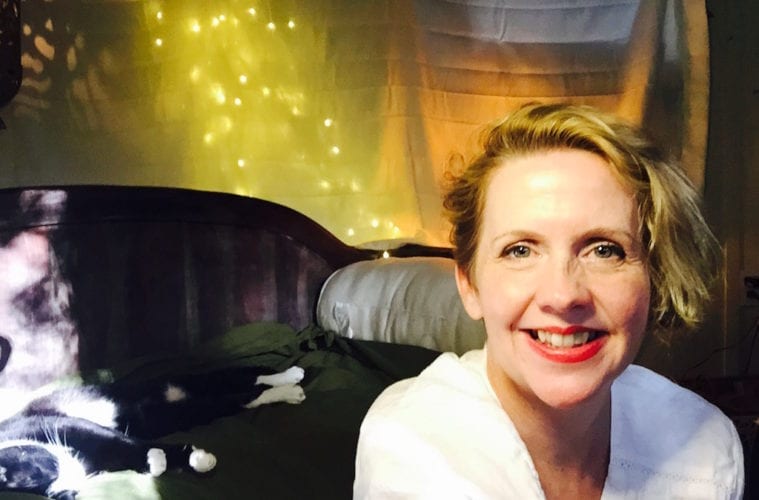 Georgia author Lauretta Hannon is celebrating the 10-year anniversary of her 2009 bestselling memoir, The Cracker Queen: A Memoir of a Jagged, Joyful Life, with a party on April 27 at the Marietta Museum of History. (Photo courtesy of Lauretta Hannon)

A lot of what you need to know about Georgia author Lauretta Hannon can be summed up in the name of the cocktail she’s serving at the 10-year anniversary party of her debut memoir, The Cracker Queen: A Memoir of a Jagged, Joyful Life, held on April 27 at the Marietta Museum of History. She’s calling her libation Mama’s Special Elixir for Especially Bad Nerves, classified as a pink lemonade champagne margarita.

The rest of what you need to know can be found in the definition of a cracker queen. According to Hannon, a cracker queen is “a strong, authentic Southern woman. She is the anti-Southern Belle. She has a raucous sense of humor and can open up a can of whup ass as needed. She holds her head, and her cigarette, up high. She cusses, cackles and raises t-total Hell when the line is crossed. You might find her waiting tables or working the third shift at the convenience store. The Cracker Queen knows loss and pain; these things have made her beautiful, resourceful and above all, real.”

The Cracker Queen is both Hannon’s love letter to, and reckoning with, the realities of a painful childhood growing up in Warner Robins, Georgia. The book is filled with warm, wrenching, well-wrought stories about her loving but dysfunctional parents and about growing up surrounded by her town’s version of deadbeats, outlaws and renegades (some of which also happened to be her relatives). Hannon left Warner Robins after graduating early from high school. She’d embark on a solo bohemian stint across Europe before enrolling as a student at the University of Georgia, where she started a writing program at a housing project. Hannon began her writing career in earnest as a columnist at Savannah’s now-defunct Creative Loafing in the late ’90s, but it was the true stories of her own life that kept tugging at her.

They were the stories she felt most compelled to tell.

“Keeping those stories inside me was becoming too heavy and toxic,” says Hannon. “I knew that they had to be released. I sensed that writing them would bring me some healing and freedom, and possibly help someone else out there, so I started telling them on Georgia Public Radio and then on National Public Radio’s All Things Considered.”

Telling her stories on NPR helped her build an audience and a platform. It also resulted in a book deal. Hannon briefly considered turning her life story into novel, rather than a piece of nonfiction, but quickly changed her mind.

“It was so clear that the real story was way better than any fictionalized version,” she says. “My parents met in an illegal moonshine stand that my teenager mother was operating. My crazy aunt shot all of her husbands, including the last one, who was named Jesse James. You can’t be given stories like these and keep them to yourself.” Hannon has had quite a ride since the 2009 publication of the acclaimed memoir, and the real-life tales of her tumultuous childhood have garnered her more than just fans. They’ve birthed a full-blown Cracker Queen tribe, with devotees turning up regularly in sequins, boas and all forms of festive regalia for Hannon’s writing classes, retreats and readings.

“One of the greatest joys of this whole adventure has been the community that has grown out of it,” she says. “I have folders of letters and emails from readers. If my house were to catch fire, I’d run in to save those letters. That’s how much I treasure these individuals and our connection. Plus, our posse knows how to have fun.”

Back in 2011, a full two years after the release of her book, she opened a literary lounge in the Atlanta suburbs called The Hive. It closed six months after it opened due to the unexpected, sudden sale of the building, says Hannon. “Tear in my PBR over that, let me tell ya.”

But so many people showed up for its grand opening that there were legitimate concerns that the floor might cave in.

“I can’t begin to describe the atmosphere,” says Hannon. “It was mind-blowing.”

The Cracker Queen also spawned a 2015 documentary, Raised in the South of Normal, directed by SCAD alum Daniel Espeut, scheduled to screen at the April 27 event. Espeut was inspired to tell Hannon’s life story on film after being moved by her memoir.

“The main focus of Raised in the South of Normal [was] Lauretta going back to her childhood neighborhood after 25 years,” says Espeut. “It wasn’t the film version of her book. . . . It’s the story of her reaction to where she came from after the release of her memoir.”

“Lauretta’s story is inspirational, and it resonates amongst all genders, races, backgrounds and demographics,” Espeut says. “When we released the film and went on our film festival tour . . . we received great feedback from a diverse audience — women and men, young and old.”

This type of continued success for a book a decade after publication — one that’s spawned its own micro-culture — is testament not only to Hannon’s talent but also to her unwavering authenticity.

She’s unflinchingly honest with her audience, refuses to play politics and relates deeply to her readers’ struggles — because she’s lived them herself. Hannon embraces folks on the margins, the ones who feel like outsiders, because she proudly considers herself one. And despite the pain she’s lived through, Hannon also retains a stubborn gladness, and people are drawn to that light.

“Honestly,” Hannon says, “my biggest hope for the book was that it might touch someone, one person. I sent my mother an advance copy of the manuscript and included a note that read: ‘Mama, This is my truth. I hope it helps someone.’”

There’s no way she could have anticipated just how much it’d still be defining her life and career 10 years later.

“I have had two lives: pre-Cracker Queen and post-Cracker Queen,” she says. “That’s how profound it has been. So many doors are still opening as a result of the book. I’ve particularly enjoyed teaching aspiring authors, doing speaking gigs, presenting my She Who Laughs Women’s Retreat and giving writing workshops in prisons and youth detention centers.”

Her writing classes are especially popular, as she offers up real, no-nonsense tips for telling your own story.

Her best advice for aspiring writers?

“Don’t lose your courage. Don’t ask others what they think. Just keep writing. And most of all, write it real, or don’t write it at all.”