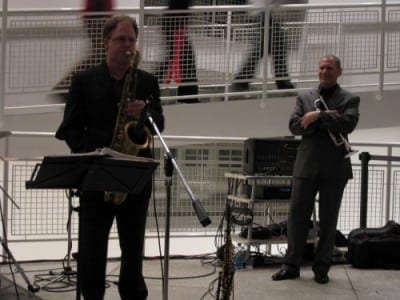 Gordon Vernick, coordinator of jazz studies at Georgia State University, is a bonding agent for the Atlanta jazz scene. Three years ago, the trumpeter hatched the idea to unite a dozen local pianists for a concert of duets, pairing those who play in different styles. This allowed pianists who didn’t see each other much to listen to their compatriots in a formal setting, while also creating a showcase for local musicians.

“It was incredible for the piano community in Atlanta,” Vernick told me. “Piano players don’t get to hear other piano players; there’s only one piano player in a band.”

After two piano concerts and a guitar-centric event, Vernick will give saxophonists a chance at 3 p.m. Sunday, March 21, at GSU’s Florence Kopleff Recital Hall. Each of the six duos will perform two standards with a GSU faculty rhythm section. A 12-man cutting contest will close the program. With the musicians donating their time, the show doubles as a fund-raiser for GSU music scholarships. The duos juxtapose artists with different musical approaches. Clarence Johnson, an R&B-style tenor player who shakes and squeals notes from his horn, will perform with tenor player John Sandfort. Veteran alto player James “Dub” Hudson will share the stage with Sam Skelton, a tenor player with a more modern bent. Many of these saxophonists do sometimes get a chance to play together — three of the 12 perform with Joe Gransden’s big band — but some on the program aren’t very active on the local club and restaurant circuit. (Top picture: Skelton and Vernick at a High Museum Friday Jazz performance in 2009. Photo by Jon Ross) Regardless of their visibility, however, Vernick said he’s chosen the best area musicians for the concert.

“I tried to look at guys who had been contributing in the Atlanta jazz scene for a long time, and also people whose playing is unique in some way,” he said. “It’s going to be very interesting for the saxophone players because they’re very competitive.”

A wide range of styles and experience will be presented during the show. Though younger sax players are a force in the city, Vernick said he wanted to limit the concert to those who have “paid some dues.”

“There’s many different strata of musicians here in town,” he said. “Atlanta is well represented in terms of saxophone players, from very traditional to guys who play commercial to guys who are doing hard bop,” he said. Subsequent annual summits of local instrumentalists are being planned; next year will focus on trumpet players. After that, trombonists will get a shot, followed possibly by bassists and drummers. “I’m going to continue to do this because it’s a lot of fun,” Vernick said. “It’s great for the music community.”