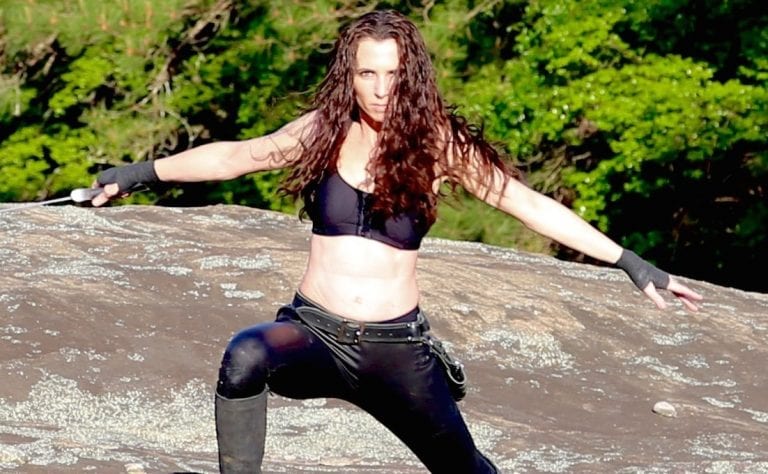 Stuntwoman Jennifer Badger has built a career taking other peoples' falls and mishaps.

For Atlanta’s film stunt people, broken bones and falling off buildings are all in a day’s work

In his book, The Full Burn, author Kevin Conley aptly summed up the life of a stunt performer. “There are deeds that your body will not let you do,” he wrote. “Stuntmen do them anyway. They aren’t foolish about it. They’re incredibly ingenious at devising ways to make it look as if they’ve pulled off something far more painful and dangerous than what they actually did.”

It takes a highly developed skill set, physical prowess and steely self-confidence to excel as a top stunt performer and, for those with the credentials, there couldn’t be a better time to be working in Georgia’s booming film and television industry, especially in the Atlanta area. The past decade has seen the ranks of professional, locally-based stunt performers swell from under 50 to more than 400 with many relocating from other areas like Los Angeles. Yet only a select number of these men and women actually enjoy steady employment throughout the year, despite the increase in film and TV productions.

He envisioned his career path at an early age. “The thing that started everything for me was when I realized there was a profession called ‘stunt man’ and that was when I saw Hooper [1978],” says Lord. “Like most stunt guys from my generation, that was the beginning. I wanted to be a deep sea diver as well, so I went out to Houston to dive school, became a deep sea diver. I thought: this is a skill set I could take to L.A. and fill my in-betweens, just like in The Fall Guy. The whole premise of the show is that stunt work is not back-to-back employment. You gotta find something to fill the in-betweens.”

Superior aquatic skills also provided a natural entry into the business for stunt performer/coordinator Jennifer Badger at age 16. “They wanted a young teen actress to do a show on Jacques Cousteau with a scuba team off the Yucatán Peninsula, which was an amazing opportunity,” says Badger, who lives in Covington with her stuntman spouse David Martin. “I started doing free diving and scuba diving, and my water skills got me a lot of jobs in the beginning.”

Since then, Badger has acted as a stunt double for the likes of Angelina Jolie, Megan Fox, Miley Cyrus and Rose McGowan.

Cal Johnson, who has been active in the business for 27 years with credits that include Iron Man 3, Zombieland and Talladega Nights, wanted to be a stuntman since fifth grade. A natural, self-taught athlete who enjoyed “jumping off buildings and cliffs” during his high school years, Johnson broke into the business in 1989 while he was living in New Jersey training dolphins. “I did work for a very famous stunt coordinator when I first started out, Terry Leonard, who told me to get as much experience as possible in L.A., then come back to the South, and if I worked hard, I could establish myself as one of the top stunt coordinators in the area,” says Johnson. “It seems like it’s working.”

Lord, Badger and Johnson have all been in the business long enough now to have seen major changes in the staging and presentation of stunts. “There’s a certain sadness attached to that in a weird way because it’s not as ballsy as it once was,” Lord says. “Somebody recently did a 125-foot-high fall into an air bag and there’s no wires attached to the guy. They said it’s the biggest high fall that’s been done in 20 or 30 years. When I was coming up there were guys doing 320-foot-high falls. A few of them died doing it, but that’s the difference. These guys were doing 125-high falls as a warm-up. But it’s much safer now and my daughter’s in the business, so I’m glad it’s safe.”

Safety conditions are much better today than they were during the days of Twilight Zone: The Movie (1983), when three actors died in a helicopter crash caused by special effects explosives. Badger says she often has to “implicitly trust my safety issues to someone else, someone I don’t know, which happens a lot. Having to be picked up bodily and thrown off the top of a building into a high fall, that’s pretty scary because if the person throwing you doesn’t line your body up just right, you’re in for a bad experience.”

Another concern is the need to constantly learn new skills to stay competitive and hirable. Johnson, for example, is proficient at motorcycle falls, Tae Kwon Do, snowboarding, car hits and full body burns to name just a few. “There’s not too many stuntmen who specialize in just one thing,” he says. “There are some who do, but it’s kind of a one-trick pony so they don’t work a whole lot because you need to be more versatile and adaptable to be used in a variety of ways.”

Some stunt performers move into stunt coordination after years of experience. While a stunt coordinator may still perform some of the stunts, his main responsibilities are planning and designing stunts, as well as hiring and scheduling his select team of performers. This often leads to second unit directing. “That’s the next step up, to be able to take the action sequences and direct them for the film’s director,” Johnson says. “But it’s also nice to be able to just show up and do stunts for the day. You don’t have to worry about budgets or schedules or booking people. You just have a fun day of working with other stunt people and then go home.”

One thing audiences tend to overlook is that stunt people are trained performers just like the major stars. As an example, Badger points to Pirates of the Caribbean: On Stranger Tides in which she was the body double for Penelope Cruz, who became pregnant prior to the film’s production. “We were halfway through filming that movie and they only shot her from the chest up,” Badger says. “I was walking for her, I was in wide shots for her, action scenes. So much of that movie is a combination of the true actor and the stunt double, and the combination of the two makes the character.”

Being a stunt double for a star has other advantages. For one thing, Johnson says, “You get to know the actors on a little bit deeper level and you get to hang out with them sometimes and gain their trust so they can turn some of the work over to you.” Working with Robin Williams and Matt Damon were standout experiences for him.

For Badger, that person was Drew Barrymore. “She is always my highest example [of working with a top star] because she couldn’t be a more kind human being,” Badger says.

And Lord points to Mel Gibson as his gold standard. “I was working on The Patriot with him and the way he interacted with every crew member left a solid impression on me,” says Lord. “I think before he was done, he probably shook the hand of every crew member and made eye contact while he was doing it.”

Of course, being a stunt performer also means an occasional accident is not uncommon. A conversation between stunt people can sometimes resemble the famous scene in Jaws where Robert Shaw and Richard Dreyfuss compare their scars.

Johnson ticks off his injuries casually, “I broke my back (doing high falls), broke my neck, broke my hand, got burned and blown up but I’m still kicking and moving,” he says

Badger broke her tailbone right before her wedding. “That is a painful injury that nothing can help,” she says. “I have also been impaled through the foot, dislocated my right shoulder and, at the same time, fractured my clavicle.”

Lord notes that all stunt people know that is part of the job. “Anybody who’s in the stunt business who’s never been hurt means you either never did anything particularly noteworthy or you haven’t been around long enough for it to have happened,” he says. “That’s why I like doing the water stuff. You may get cold, but you don’t hurt. It’s a lot easier for me to warm up than it is for me to heal.”

In the last three to four years, Johnson, Badger and Lord have benefited greatly from the huge increase in local production work. But for those stunt performers with less experience, being able to support yourself in this line of work is difficult without another source of income. Some of the big production companies that come to town from Los Angeles bring their own stunt crew and coordinators because they either feel the Georgia locals can’t provide the level of talent needed or they simply prefer to work with trusted longtime collaborations.

Badger thinks that situation is starting to change. During the recent filming here of Captain America: Civil War, she noted that the production included a good mix of Los Angeles and Atlanta-based stunt workers, and resulted in an educational and inspiring collaboration. The Hollywood crew were able to see firsthand that the Georgians were exceptional, highly skilled professionals and at the same time, the locals were able to witness why some L.A. stunt people transcend all competition and deserve their A-list ranking.

It all comes down to this: the film and television industry is expert in the art of illusion and stunt performers are an integral part of the big picture. Keep that in mind the next time you watch a made-in-Georgia production with lots of action sequences. “It’s really the business of show,” Lord says. “You’re there to create the magic.”