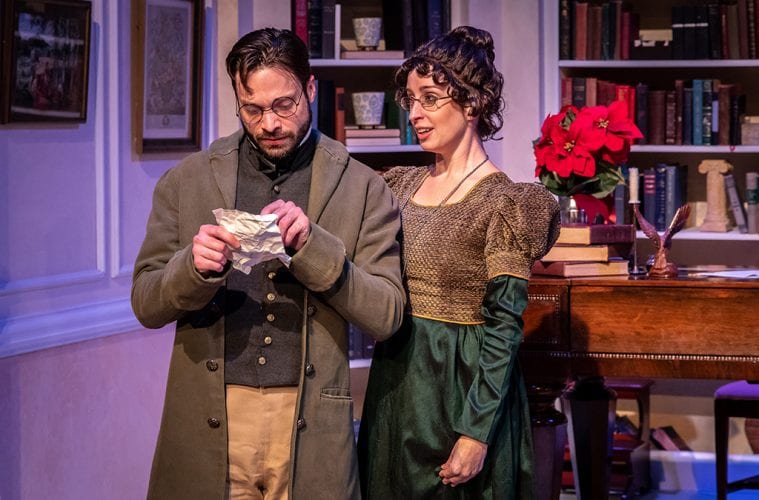 Jonathan Horne and Amelia Fischer played love interests in "Miss Bennet: Christmas at Pemberley" at Theatrical Outfit the past two seasons. This holiday brings its sequel, "The Wickhams," which looks at the goings-on in the servants quarters. It runs November 27–December 29. (Photo by David Woolf)

Atlanta vs. the nation: We’re seeing many top American plays, playwrights in 2019–20

Every season, American Theatre magazine, a national trade publication, crunches the numbers to determine the most-produced plays and playwrights of the year. We thought it would be fun to see how metro Atlanta’s companies compare to what’s happening nationally. The answer for the 2019–20 season: pretty good. Decatur-born, San Francisco-based Lauren Gunderson is the most-produced playwright in the country again this season, for the second time in three years.

The results are based on season lineups reported by the Theatre Communications Group’s 387 member theaters. Not tallied are works by Shakespeare and such holiday chestnuts as A Christmas Carol and The Santaland Diaries.

Atlanta audiences have seen the Gunderson plays Silent Sky; I and You; Ada and the Memory Engine; The Book of Will; The Taming; EMILIE: La Marquise du Châtelet Defends Her Life Tonight; The Revolutionists; and Exit, Pursued by a Bear at Theatrical Outfit, Aurora Theatre, Essential Theatre, Synchronicity Theatre, the Weird Sisters Theatre Project and 7 Stages, respectively.

TIE: A Doll’s House, Part 2, by Lucas Hnath and The Curious Incident of the Dog in the Night-Time by Simon Stephens (12 productions each)

Actor’s Express and Aurora Theatre staged a coproduction of the four-character A Doll’s House, Part 2, last season with Tess Malis Kincaid in the key role of Nora Helmer. This season, Aurora and Horizon Theatre are doing a coproduction of The Curious Incident of the Dog in the Night-Time. The thriller, featuring an autistic teen and based on the Mark Haddon book, just wrapped its Horizon run. It runs January 9–February 9 at Aurora in Lawrenceville.

Every Brilliant Thing by Duncan Macmillan with Jonny Donahoe (10 productions) Georgia Ensemble Theatre stages the bluegrass musical Bright Star this spring (April 2–19) with direction by Aurora Theatre’s Justin Anderson (The Bridges of Madison County, Les Misérables), who knows musicals. It follows a newspaper editor in 1940s North Carolina who sets out to find the true story of her difficult past. The show had only a three-month run on Broadway in 2016 but was nominated for five Tony awards.

Horizon Theatre staged Morisseau’s Pipeline, about a mother/educator fighting for her son and her students, in March and April. True Colors Theatre Company has staged Morisseau’s Detroit Trilogy, consisting of Skeleton Crew, Detroit ’67 and, in September–October, Paradise Blue.

Atlanta audiences have not seen Admissions, Cambodian Rock Band, The Children, The Great Leap, Ludwig’s Murder on the Orient Express, The Thanksgiving Play or Tiny Beautiful Things. None are scheduled for this season.

School Girls; or, the African Mean Girls Play runs February 11–March 8 at True Colors. The comedy, set in a Ghana boarding school, depicts a power struggle over classism and body shaming between the school’s reigning queen bee and an American transfer student.

Horizon Theatre staged The Wolves, about the internal and external struggles of a girl’s soccer team, in January of this year. Theatrical Outfit stages “The Wickhams: Christmas at Pemberley” in November and December.

Lauren Gunderson — 33 (including 12 cowriting credits). The past two seasons at Theatrical Outfit for her Miss Bennet: Christmas at Pemberley. This holiday season, it offers the sequel, titled The Wickhams: Christmas at Pemberley (November 27–December 29), which follows the goings-on in the servants’ quarters. Both Pemberley plays were cowritten by Margot Melcon. Carolyn Cook directs a cast comprising Lauren Boyd, Shaun MacLean (Our Town, The Laramie Project), Erika Miranda, Deadra Moore, Daniel Parvis, Jasmine Thomas and Justin Walker.

Tennessee Williams — 17. Atlanta has seen most of the Williams canon over the years. Most recently, Georgia Ensemble staged Cat on a Hot Tin Roof in September.

August Wilson — 15. All of the late, great dramatist’s 10-play Pittsburgh Cycle has been seen here. The Alliance Theatre has done all of the plays and selected pieces have been seen  True Colors, Georgia Tech’s DramaTech, Kennesaw State University and Spelman College. Wilson (1945–2005) won Pulitzer Prizes for The Piano Lesson and Fences.

Karen Zacarías — 15 (including 3 cowriting credits). Aurora Theatre staged her Native Gardens in May. Horizon has staged her Legacy of Light (2011) and The Book Club Play (twice, in 2013 and 2014). The Alliance did the world premiere of her Einstein Is a Dummy in 2005. Joshua Harmon — 13 (including 1 cowriting credit). Actor’s Express just closed his 2018 comedy Skintight. The company staged his Significant Other in 2016 and his Bad Jews in 2015.

Simon Stephens — 13. Aurora Theatre stages its half of The Curious Incident of the Dog in the Night-Time (a coproduction with Horizon Theatre) beginning January 9. The Horizon staging has closed.

Lynn Nottage — 12 (including 1 cowriting credit). Sweat, winner of the 2017 Pulitzer Prize for Drama, arrives at the Alliance Theatre on April 22. This topical reflection of the present and poignant outcome of America’s economic decline comes from research and interviews that Nottage did. The Alliance staged her play By the Way, Meet Vera Stark in 2013 and her Intimate Apparel in 2006.

Duncan Macmillan — 11 (including 10 cowriting credits). See Every Brilliant Thing above.

Kate Hamill — 11. Hamill is known for writing innovative, contemporary adaptations of classic novels that often are performed at breakneck speed. Synchronicity Theatre staged her version of Sense & Sensibility in 2017.

Quiara Alegría Hudes — 11 (including 7 cowriting credits). Pinch ‘N’ Ouch Theatre did her Pulitzer Prize-winning Water by the Spoonful in 2015. The Alliance did Elliot, a Soldier’s Fugue in 2006 and 26 Miles in 2009. Most recently, Aurora Theatre and Theatrical Outfit did a coproduction of In the Heights (Hudes wrote the book) in 2016. Paula Vogel — 10. The Pulitzer Prize-winning playwright is represented in Atlanta this year by Indecent, running March 4–29 at Theatrical Outfit. The drama was inspired by the 1923 Broadway debut of The God of Vengeance by Jewish writer Sholem Asch. It tells the story of a kiss between two female actors (one playing a prostitute, one a brothel owner’s daughter) that led to the entire cast being arrested for obscenity. Synchronicity Theatre staged her Hot ‘N Throbbing in 2000 and The Long Christmas Ride Home, in a co-pro with Actor’s Express, in 2005. The Aliiance did her Pulitzer-winning How I Learned to Drive in the late 1990s, and the play has been seen at Georgia State University. Director Mira Hirsch’s cast at Theatrical Outfit features Andrew Benator, Stephanie Friedman, Pamela Gold, Brian Kurlander, Clayton Landey, Christina Leidel and Brandon Michael Mayes.

Jen Silverman — 9. Aurora Theatre recently closed her dark comedy The Roommate, about a recently divorced woman and a woman in hiding who move in together. In 2015–16, she was a finalist in the Alliance/Kendeda National Graduate Playwriting Competition and her play All the Roads Home received a staged reading.

Lucy Kirkwood — 9. See The Children above.

Steve Martin — 9. See Bright Star above. The Alliance produced his Picasso at the Lapin Agile in the late 1990s and his The Underpants in the 2005–06 season.