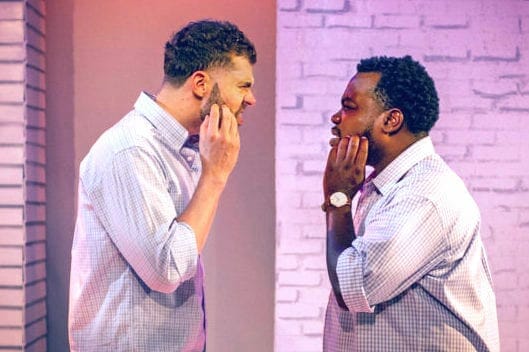 Justin Walker (left) and Enoch Armando King in "Hands of Color" at Synchronicity Theatre in June 2019. (Photo by Jerry Siegel)

“Atlanta theaters, I need your imagination”: An essay from arts journalist Kelundra Smith

Editor’s note: Kelundra Smith is an Atlanta-based arts journalist and theater critic who’s written extensively for ArtsATL and has been published in American Theatre magazine, The Atlanta Journal–Constitution, Atlanta Magazine, The New York Times and Oxford American magazine, among other publications. She was formerly ArtsATL‘s theater editor and wrote this piece at our request.

THE PAST FEW MONTHS have presented many tests of faith for our nation. With a pandemic that’s unlike anything we have seen in modern history, record unemployment and international protests calling for an end to racism, it’s easy to feel helpless. As they always do, artists have seeped in like a balm in Gilead to ease the tension and remind us that there is beauty in the world. Theaters in particular have engaged audiences with a wealth of digital programming, including panels, workshops, sing-alongs and recordings of past performances. That beauty, however, has been presented alongside testimonies from artists about the pain they’ve experienced due to discrimination in our theaters.

Griffin Matthews, the playwright and actor behind the off-Broadway musical Witness Uganda, posted a seven-minute video on Instagram detailing the numerous injustices he faced in the production process. Most telling, perhaps, was his statement that “white people need not one black person to become a Broadway sensation.”

Speaking of Broadway, Jeremy O’Harris, who wrote Slave Play, tweeted about the many occasions on which he’s been confused with Tarell Alvin McCraney, the playwright, educator and Academy Award-winning writer of Moonlight. The executive director of Chicago’s renowned Second City comedy theater stepped down after accusations of failing to promote an inclusive environment.

We’ve also seen Atlanta artists sharing their experiences. Cynthia D. Barker, an oft-employed actor, described an encounter in which a white actor approached her and other black actors asking if he could join them or “is this the black table?” Enoch Armando King, who works almost constantly here and nationally, shared his experience of being asked why all black people drive Dodge Chargers. A local playwright described being told that her play was too revolutionary for white audiences. The list goes on and on and on.

As a theater critic who’s been covering stages in the metro area for the past six years, I’ve had ushers touch my curly hair while I’m in line for the bathroom. As soon as the notepad comes out, I can always count on a white audience member asking questions about how it is that I’m qualified to be a theater critic. These microaggressions I’ve just described are not a result of curiosity. It’s a million little traumas that have sent people out into the streets in protest. The racism and discrimination that artists of color experience in our revered artistic institutions has been pushed to the forefront, and we must do something about it. The racism is not only present in our one-on-one interactions but also in which directors are hired to direct which shows, which designers are hired to design which shows, how board members are selected, where educational programs are implemented and, most telling, which plays and musicals are produced onstage.

I saw about 75 shows last year and I’d guess that 80 percent of them were written by white playwrights and directed by white directors. Just before quarantine, New York Times theater critic Jesse Green published an article headlined “54% of the people. 12% of the plays. Atlanta, do we have a problem?” In short, for a city with a population that is largely African American, why doesn’t the work we see onstage reflect that? Given New York’s abysmal diversity issues, it was an audacious observation, but it wasn’t incorrect.

I can’t count the number of artistic directors I’ve heard say they’re afraid their audiences will abandon them if they do more than one or two plays featuring artists of color in their seasons. This mindset is insulting to our city’s sophisticated, intelligent audiences. It’s also detrimental to the economic security and development of artists of color. In the theater, we typically invest in white artists based on their potential, but we judge artists of color by their résumés. Already, those artists are entering the audition room, the rehearsal hall and the stage with a greater pressure to prove their worth to an institution operating from a place of scarcity. How can artists of color do their best work in an institution that doesn’t believe that the best work exists within them?

Many of those same artistic directors have issued PR statements in solidarity with the Black Lives Matter movement. I just wonder when black lives will matter on their stages. The issue with these well-meaning publicity statements is that even the language used refers to racism and the black community as something separate and aside from them — even when their institutions have contributed to the unjust gentrification of black neighborhoods — but I digress on that point. This is more than a black-and-white issue, this is a matter of humanistic value.

What this all boils down to on our stages, and in our world, is a lack of imagination. Humans can only manifest what they can imagine, so if people of color don’t live a full existence in your imagination, they won’t be in your life. When you close your eyes and envision utopia, who do you see? If the only image of Latinx folks in your mind is maids and migrant workers, if the only image of Native Americans in your mind involves rain dances and tepees, if the only image of Asians in your mind are asexual nerds, then when you encounter someone who doesn’t fit that mold in the real world you won’t be able to honor their experience. That’s not to say that those specific segments of those populations shouldn’t have their stories told in the theater, but they should not be the only stories.

There may be some folks reading this and thinking, “Don’t white people need representation, too?” This isn’t about attacking or eliminating white people. This is about elevating the taste of theater makers and their audiences by telling a wider breadth of stories. Imagine with me that whiteness is no longer the baseline, no longer the default for a relatable story. Imagine that when you experience a story, you’re still able to see yourself in it, even if the actor’s ethnicity isn’t the same as yours. Imagine that you’re able to do what audiences of color have been doing for centuries. Rob Cleveland (from left), Garrett Turner and Brian Kurlander in the boxing-themed “The Royale,” seen at Theatrical Outfit in October 2018.

Imagine a theater where the solution to the diversity problem isn’t that people of color need to work harder, but rather that people with their unconscious bias need to get out of the way and loosen the grip on fiduciary resources. What you produce signals to me who you see as worthy of investment, and Atlanta can lead the nation in removing prerequisites to worthiness.

Here are 11 changes I want to see going forward:

MORE COMMISSIONS for original plays and musicals by local writers of color on subjects that they want to write about.

MORE JOURNALISTS, critics and influencers of color on your press list.

MORE CHILDREN and students invited into the theater in general.

MORE EDUCATIONAL PROGRAMS that engage students of color from all socioeconomic backgrounds.

MORE MEANINGFUL PROGRAMMING surrounding productions — questions and comments on dramaturgy (bulletin) boards, for example — that encourage connection in lobbies and during intermissions.

MORE INTENTIONAL HOSPITALITY to make all people feel welcome and engaged when they enter the building.

In short, I want your imagination. Get out of the midcentury-modern-living-room drama and into the world. Theater is the only art form that occupies a sacred space between the imagination and reality, and in that space, there are endless possibilities. Neal A. Ghant in whiteface (foreground), with Kyle Brumley in Branden Jacobs-Jenkins’ “An Octoroon” at Actor’s Express in winter 2019. (Photo by Casey Gardner)

I expect at least 54 percent of the plays I see in Atlanta during the 2021–22 season to be written, acted and directed by a wide-ranging group of people of color. I love a performance, but not when it comes to advocacy. If we want to dismantle racism in the world, the theater is a great place to start. I believe that when we are allowed to reconvene, we are on the precipice of a renaissance for live theater. There is no substitute for sitting shoulder to shoulder with strangers and hearing a good story. I can’t wait to do it again.