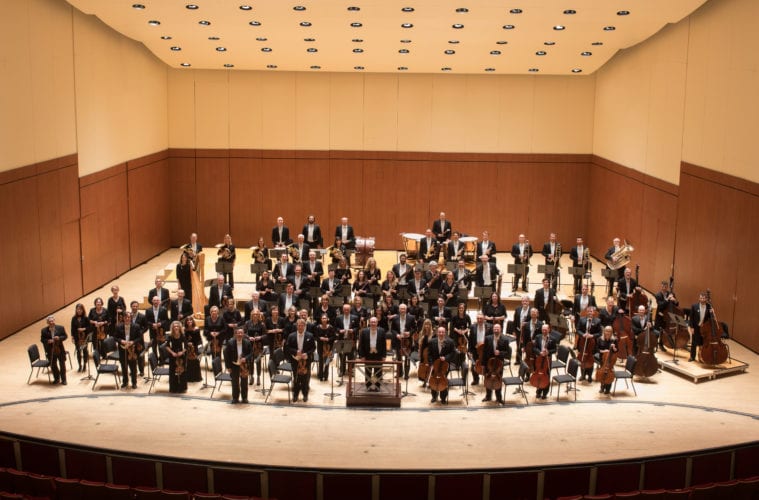 The ASO performs the works of Beethoven and Bernstein again on April 13 and 14. (Photos by Jeff Roffman)

The ASO’s Beethoven and Bernstein hampered by overly ambitious tempos

The theme last night of the Atlanta Symphony Orchestra’s concert of Bernstein and Beethoven was universal brotherhood. This sense of brotherhood was expressed very differently by the two masters: Bernstein’s “Chichester Psalms” was a humble stillness, whereas Beethoven’s Symphony No. 9 was a cry of universal joy.

Despite the sometimes heroic efforts of the ensembles and soloists, the evening was marred by a tendency of the guest conductor, Thomas Søndergård, toward unreasonably fast tempos that detracted from the seriousness of each artistic work. This resulted in sloppy timings and articulations, and threatened the Beethoven soloists with running out of breath. The program, which nevertheless was enthusiastically received, repeats this Saturday and Sunday.

We should be reminded that towering, beloved musical works — like those presented last night — become many things to many people and in many places. Conductors have a responsibility to acknowledge the history of a masterpiece while putting their own stamp on it.

Søndergård appears to be a promising, rising conductor of a general balletic manner. He seems to avoid dynamic nuances in his beat. His rhythmic style is crisp and clean, and he aims toward lighter, faster tempos. He avoids rubato whenever possible, and there are indeed circumstances where this approach bears fruit, such as the overture to a comedic opera.

The two works performed last night, however, argue for a more nuanced approach incorporating slower tempos. Bernstein’s first movement is in a bracing 7/4 meter with pervasive dissonance and a dance-like feel reminiscent of his earlier compositions such as West Side Story. Its tempo was so fast that the chorus’ consonants, always a challenge in Symphony Hall’s wet acoustics, were difficult to discern. I found the harp parts — so significant to Bernstein that he insisted they be rehearsed first — buried in the overall sound. Additionally, the soloists in the chorus at the back of the stage could have had their voices amplified.

The ASO performs the works of Beethoven and Bernstein again on April 13 and 14. (Photos by Jeff Roffman)

The second and third movements of “Chichester Psalms” did not have problematic tempos. In the second movement, countertenor Daniel Moody offered an appropriately pure tone and assured, long lines as the child-like, innocent angel — Bernstein had preferred a boy treble for this role — who declaims “Psalm 23.” Listeners will enjoy Moody’s emphasis on a sighing, descending motif that suggests a heavenly sense of comfort and abiding grace. The third movement opens with a long, painfully sad orchestral introduction but moves without break to the finale’s hopeful prayer for peace and unity. The chorus intoned the finale’s lines from “Psalm 133” with soft, solemn reverence.

If the audience at a concert achieves transcendence, they do not mind an occasional rubato — even if they arrive home five minutes late. In the Beethoven, it was hard to justify the sheer relentless nature of the fast tempos used. Any musical decision requires justification, and any tempo must be appropriate to a work’s expression. Could Søndergård have been literally implementing Beethoven’s metronome markings? As of the 1820s, Beethoven would have been deaf; plus many musicians have found his metronome markings extreme — whether too fast or too slow. Some have speculated that his metronome was broken.

For all of the orchestra’s best efforts, Beethoven’s first movement was so sprightly that the dark, heavy and tragic moments were glossed over. Søndergård’s approach did not consistently highlight the lower instruments, and failed to give a meaningful interpretation of the movement’s fateful, tragic moments.

To my ears, the second movement of the Beethoven — while sloppily aligned rhythmically at times — was the most appropriate for a fast, relentless tempo. Here, imitative entrances of instruments and antiphonal effects were crisp and effective.

The third and fourth movements of the Beethoven were disastrous. The third movement was too fast for the serene lyricism, and the orchestra reached a high level of intensity by its midpoint that was not warranted for any reason. Any expression of a gentle rebirth was obscured.

The fourth movement had four able soloists, soprano Jessica Rivera, mezzo-soprano Stephanie Lauricella, tenor Thomas Cooley and bass Andrea Mastroni. The four teamed up well into duets. Mastroni’s solos had an almost supernatural warmth and depth of vocal timbre that made audience members sit on the edge of their seats. Søndergård’s tempos, however, were uniformly much too fast, and he did not let his soloists breathe. I spotted what appeared to be occasional arched eyebrows between the soloists as their entrances rapidly came up.

In this disappointing context, the Atlanta Symphony Chorus did an admirable job of articulating Schiller and Beethoven’s text, probably since the declamatory, square style of vocal writing allows one to sneak breaths. But by this point, my favorite expressive points — for example, the soaring development and fugato in 6/8 after the march in B-flat with triangle — were lost in the frenetic push to the finish line.

In the future, it would be nice to hear a more nuanced — and collaborative — conducting approach that will allow our very talented soloists to thrive.