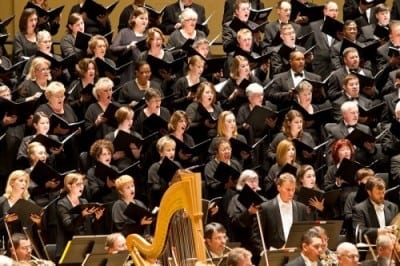 ASO review: Preparing for Carnegie Hall, Spano at his best in new work by Esa-Pekka Salonen

What a wild night! For Thursday’s concert, the folks who program the Atlanta Symphony Orchestra packaged together three of the most adventurous pieces of its entire season: two from the early 20th century and an American premiere. The result was an exhilarating and challenging evening for the audience. The concert will be repeated Saturday at 8 p.m.

It started with Sergei Rachmaninoff’s “The Bells,” which features a massive orchestra, chorus and three soloists and is a setting in Russian of Edgar Allan Poe’s poem of that name, which takes a bittersweet look at life, from birth to death, as proclaimed by church bells. Bells played an even more prominent role in Orthodox Russia than in Poe’s America, and Rachmaninoff used the poem as the basis for a melodramatic explosion of colors, including wild moments of brass and percussion. But the piece is at its best in its more peaceful moments, and conductor Robert Spano effectively brought things down in these passages while maintaining control.

This is one of the majestic choral works introduced in Atlanta by the late Robert Shaw, who also recorded it with the ASO. The essential problem it presents is that if you sing it in English, as did Shaw, you lose the wonderful sonorities of the Russian language. If, on the other hand, you perform it in the original Russian, as was done here, you really need Russian voices. If you’ve ever heard this work performed with a good Russian chorus, you’ll never forget that very specific sound of massed Russian basses and baritones singing in their native language. They just reach out and grab you by the heart.

The ASO Chorus is one of the great joys of Atlanta, but it cannot re-create that sound. As if to underline this problem, one of the soloists was a Russian bass, Denis Sedov. His resonance and the quivering, smoky hue of his voice were the highlight of the performance. The other soloists were also Russian. Tatiana Monogarova, a soprano, has a creamy sound with nicely controlled vibrato and the power needed to soar above the massive forces behind her. She sang with great expressiveness, using her body and face well, although no one seemed to think it necessary to turn on the lights that would have allowed us to see her clearly. The tenor, Sergey Romanovsky, had a sweet, dark-hued, youthful sound but lacked the heft to be heard above the other forces.

Esa-Pekka Salonen is a highly regarded conductor, famous for leading the Los Angeles Philharmonic until a few years ago. In recent years he has increasingly turned to composition, attracting attention as someone who straddles European and American sensibilities: European composers don’t obsess about tonality and like to experiment with new sounds, while Americans are more focused on “accessibility.” Salonen’s “Nyx” had its world premiere in France in February. A co-commission by the ASO and other groups, this was its U.S. premiere, and the orchestra will perform it at Carnegie Hall next week.

In “Nyx,” the musical themes move through a universe of exotic sounds. They serve to anchor the piece, but what makes it compelling is the dazzling wealth of intriguing riffs, arpeggios and wild percussion passages, all wondrously orchestrated for a large (and highly virtuosic) orchestra. It is as though Salonen has marshaled all of the most interesting sounds invented for the traditional orchestra, especially in the last generation or so. Things sometimes get bumpy or dissonant, but there are gentler passages as well. This is a game where every member of the team gets to play, and even to show off, as seemingly every instrument is called on for seriously advanced playing. Laura Ardan’s clarinet solo was especially sumptuous, as were the horns. For much of the 17-minute work, the whole orchestra is playing together, often at full volume.

In his comments, Salonen said that the work’s title is derived from a mythical Greek goddess whose elusive personality might be described by the rapidly changing textures and moods of the piece. In the end, its success lies in the brilliant way the composer has organized all this superb material into an organic, and somewhat linear, whole. Salonen continues to find his own original voice and to become an increasingly important force in new music. Spano, long a champion of new work, was at his best here, giving this difficult extravaganza the kind of precision and dramatic sensitivity it deserves.

The concert concluded with Alexander Scriabin’s “Le Poem de l’extase,” an eccentric and rather erotic work that has become one of Spano’s favorites. Scriabin, a contemporary of Rachmaninoff, believed that we can communicate with the spirit world by way of music, so perhaps it’s appropriate to program him near Halloween. This is a work of high drama, and it can be a bit much unless the conductor picks his battles, as Spano did here, emphasizing the contrasts in tempi and sound levels, which brought forward the more dramatic elements of the piece. Principal trumpet Thomas Hooten was especially effective as a soloist.