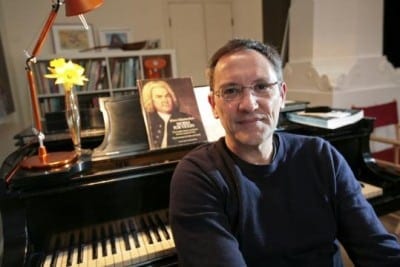 Our friend Osvaldo Golijov, one of today’s leading composers, is back this week in Symphony Hall — in music if not in person. A member of the Atlanta Symphony Orchestra’s artistic family, Golijov is an Argentinean living in the United States, with deep ties to Latin American dance, to ancient Jewish traditions and to the free-spirited soundworlds of his teacher George Crumb. Each new score is an event.

Golijov’s nine-minute “Sidereus” was commissioned by the League of American Orchestras, a service organization, to honor Henry Fogel, who worked for several orchestras and led the league until 2009. It was co-commissioned by 37 orchestras around the country, including the ASO. (Former ASO assistant conductor Mei-Ann Chen led the world premiere in Memphis in 2010.)

Fortunately, “Sidereus” is not a musical depiction of Fogel (known as a wise and generous man who, in fact, has been helpful to almost everyone in the music business, including me over the years). Instead, it takes a loftier subject as its inspiration: Galileo’s book “Sidereus Nuncius” (“Starry Messenger”), written in 1610 after the astronomer peeked into his new telescope, examined the surface of the moon and discovered that Jupiter has its own moons. As Golijov writes, “The moon was no longer the province of poets exclusively.” The book’s publication also opened a fundamental rift between Christianity (which has all the answers) and science (which asks a lot of questions).

“Sidereus,” scored for a chamber-sized ensemble, opens with a low rumble and brass choirs that somehow suggest deep space. The violins enter, and take flight. As the music builds in intensity, or rather in urgency, a far-away goal comes into view, put off briefly by a melancholy, dancy Latin swing that still manages to flutter in the space-time continuum. “Sidereus,” modest in its ambition, is a very attractive piece. (And like Golijov’s cello concerto “Azul,” it is music at home in the cosmos.)

Although there were popular works by Tchaikovsky and Brahms coming up on the program, the ferocity and focus that the musicians gave “Sidereus” made clear where Music Director Robert Spano’s and the ASO’s expertise and interest lie.

How nice it would have been if the evening’s soloist, Joshua Bell, had brought with him a new violin concerto by Golijov. Instead he brought Tchaikovsky’s muscular concerto, in a high-octane performance. Bell offered Tchaikovsky as if there were no secrets left to reveal. His pearly, silvery tone, so fetching and gentle on the ear, is itself a masterpiece of great beauty. His manner on the violin has become direct and almost plainspoken, which has the virtue of laying out an X-ray image of the score, for better and worse. It puts the audience’s focus not on the composer but on the performer.

Whether by artistic nature or career strategy, Bell pulls it off with aplomb. His cadenza in the first movement had everyone holding their breath, as if it was the mad scene from “Lucia di Lammermoor” — of course we know the outcome, but the storytelling is so vivid and the protagonist so charismatic that we’ve once again lost ourselves in the drama.

Spano closed the evening with a reading of Brahms’ late-in-life Symphony No. 4, and his interpretation was rather more linear and architectural than warmly autumnal. The opening theme, a two-note falling-and-rising pattern — almost like breathing — came off as clinical and as a statement in isolation. There should be ache and regret, and maybe a little anxiety, in this music. It’s as if Brahms, the worldly master of symphonic form, didn’t quite know how to begin and modestly offered the simplest introduction. It’s as emotionally fraught as any melody he’d ever written.

Elsewhere Spano squared off corners, which gave the music a chopped-up feel. While everything fit nicely, the symphony gave off no glow, no nostalgia, no sense of a lifetime of wisdom. Still, the violins (and the strings overall) played with magnificent sheen and finesse.

The second movement, a leisurely andante moderato, mostly skated along the surface, although here, too, were flashes of intensity and tenderness. I wanted to hear much more juice extracted from this contemplative slow movement. The symphony became increasingly bold, blocky, disjointed (and occasionally a little metronomic) in the final two movements, as if Spano hadn’t fully processed and digested these sections. Encouragingly, the orchestra’s cohesion didn’t suffer, and, as sometimes happens, we might expect the whole work to come together by tonight’s concert.