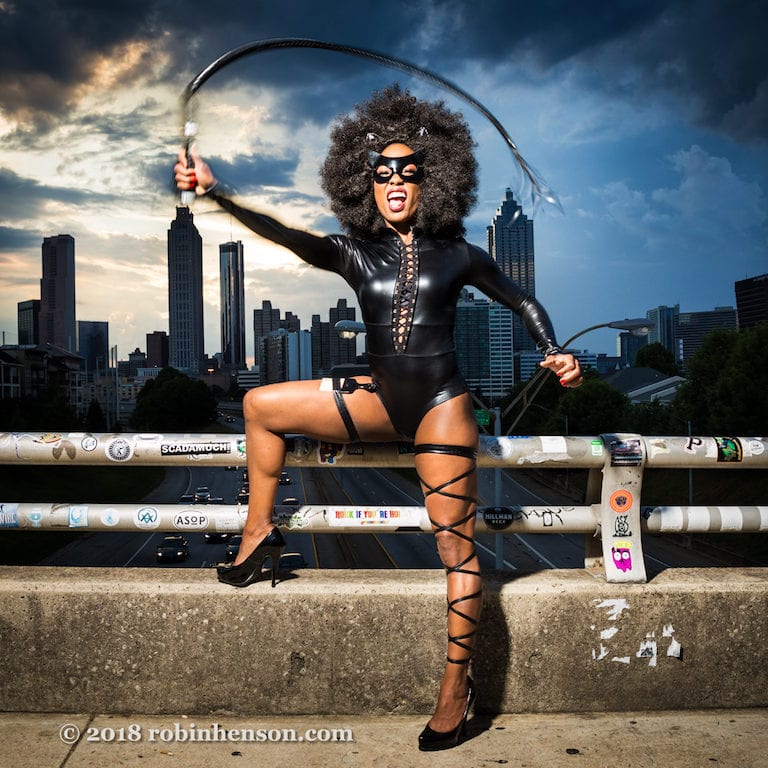 Damita Howard is not a woman to be messed with. She falls down stairs, leaps from vehicles and literally jumps through rings of fire for a living.

The veteran stunt performer, who was also a national roller derby girl in college, has some major film credits to her name, including The Hunger Games, Selma, Whip It, Avengers and Captain America. She’s also the longest-running stunt double on the hit AMC series The Walking Dead. In addition to her stunt career, she also has a bachelor’s degree in criminal justice and two master’s degrees in applied social sciences and historic preservation.

Despite being tough-as-nails on screen, Howard doesn’t give off Evel Knievel vibes in person. In fact, she radiates zen. She recently chatted with ARTS ATL about what it’s like doing stunts for film, how strange it is getting fake-punched by movie stars and what it’s been like living these past 10 years as a real-life superhero.

ARTS ATL: Can you describe a typical day on set?

Damita Howard: In stunts, there’s not a typical day because you never know what you’re going to be doing. Every job is different. Usually I arrive to set, somebody gets me some breakfast. I get settled into my trailer, and then depending on my shooting schedule, I get pretty quickly whisked off into hair and makeup. Then it’s a whole lot of sitting around and waiting until it’s my turn to do the action.

There’s a lot of waiting involved in stunts. Sometimes we’re waiting around for eight or nine hours, and other times we’re performing the entire time. It just depends on what the action is — I could be getting set on fire or thrown from a second-story window. I could be having a fight or almost getting hit by a car.

ARTS ATL: And how did you get started doing this kind of work?

Howard: I was playing roller derby with the Atlanta Roller Girls at the national level, and Drew Barrymore was producing and directing a movie called Whip It. She didn’t have anyone to skate for Eve, the rapper/actress in the film. So they had to find a real roller girl.

I was in grad school at Georgia State, and I got this call, and within five days I was on a plane headed to Detroit, where I shot for six weeks, doubling Eve. I met with the film’s stunt coordinator, Jeff Dashnaw, and he told me I’d make a great stuntwoman. He made some calls for me, and that was it.

ARTS ATL: What training did you have to undergo as a stunt performer?

Howard: When I got into stunts, I was really good at getting beat up and beating people up because of roller derby. I got this reputation as the girl that you can throw around and she’ll still get up.

I think that initially as a stunt person, you think you should be able to do everything. And I had to have a reality check with myself in the early years about that. My first focus is always going to be my daughter, so I had to pick what is it that I want to do most. So I chose to do fire training.

Andy Rusk, who is a local stunt coordinator in Georgia, is also the fire guy, and he trained me in fire work. I’ve also always loved horses, so on The Walking Dead this season I was able to do that. If I’m not working, I train three to five days a week in Western riding. That’s my main focus right now.

ARTS ATL: Do you find that stunts are primarily a male-dominated profession in the film business?

Many of them went out West to be cowboys in Hollywood, and now Hollywood is down here.

Michonne as a character is a badass, so to be brought in to do stunts for someone who’s already badass feels extra badass. And I love working on the big Marvel movies. I’m a historian at heart, so it was really special to me to do stunts on the movie Selma too. To be able to reenact that really important moment in history was really special.

ARTS ATL: And the worst?

Howard: I’m super lucky. I was burned once on a show. Special effects was supposed to set off some borders after I ran over them, and they set them off on me. Thankfully, I was able to get bandaged up and resume shooting the next day.

I’ve also had like 10 concussions, so I think I’m dealing with some of the things football players deal with. Most of the concussions have resulted from doing stunts with actors. They want to do their own actions, and they’re in the moment, so they don’t realize that those things hurt. I can’t tell you how many times I’ve been punched in the face by an actor.

ARTS ATL: How has the growth of the Atlanta film industry impacted you?

Howard: Well, when I started 10 years ago, I only knew one other black stuntwoman in town. She’s lovely — she and I are good friends. And there was another black woman in Florida. So it was kind of our market, the three of us, which was awesome. And now there’s quite a few more of us, which is great too. We’re all working. Ten years in, you start developing other skills. So the growth in Atlanta has pushed me to do other things like acting and producing. The growth of Atlanta has pushed me to become bigger and better. So I welcome it.

ARTS ATL: We imagine that it can be pretty grueling some days doing the work you do. Do you have any kind of mantra or advice that motivates you on the tougher days?

Howard: Every day I think, “Let’s just put one foot in front of the other.” I tell myself that every day is a new day and that I’m a real-life superhero.