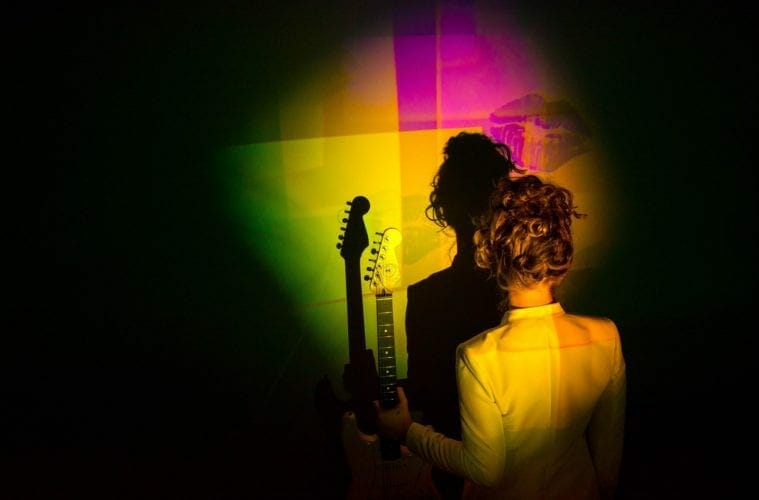 Nova Scotia-born Chelsea Shag is often seen sporting her unique style of puffy pink earmuffs, kimonos and bunny slippers while performing in her adopted city. Southern living has left a mark on her careful, colorful blend of R&B, funk, pop and blues songwriting. The chorus to “Rooftop” poured out of her three years ago as though her subconscious had something to say. “I wasn’t sure what I was really trying to say at the time, but now I see it clear as day,” she says. “I felt stuck in my situation. I didn’t allow space for myself because I was so tangled in my relationship. I learned that you can leave but you can’t abandon the skeletons in your closet — they’ll come after you.” Shag spends the first half of the video, directed by Angelica Perez-Castro, running from a skeleton in her closet. Midway through, she faces her nemesis head on, eventually becoming a skeleton herself. Perhaps to signify that yes, the past is part of who we are, but it’s nothing to fear. “With the pandemic, I’ve been one of the lucky ones who has benefited from all of this time alone,” she says. “I’ve been studying sound healing and have found a lot of healing within myself in the last few months. It’s been refreshing to gain a new perspective and to really just be with myself, with no distractions.”

Chris Senador and Lisa Rossi are core members of Atlanta’s beloved Antarcticats, which is on indefinite hiatus. They’re back stronger than ever with the new group Summersick. “Out of Town,” the band’s debut video, is an emotional wave of homesickness for that warm summer feeling. Senador, who has shown his vocal prowess while stepping up as Summersick’s front man, says the song laments the loss of summer this year due to COVID-19. Summersick features members from such Atlanta indie bands as Andrea & Mud and Big Brutus — Nick Senador (guitar), Andrew Barkau (bass) and Will Derr (drums). “Out of Town” contains hints of classic surf rock and indie elements similar to that of Two Door Cinema Club. “It was written as a celebration of my newfound desire to get out, travel and find new experiences after breaking out of years of depression,” says Chris Senador. Stay tuned, the group’s second single, “My Head,” drops next Friday (November 6).