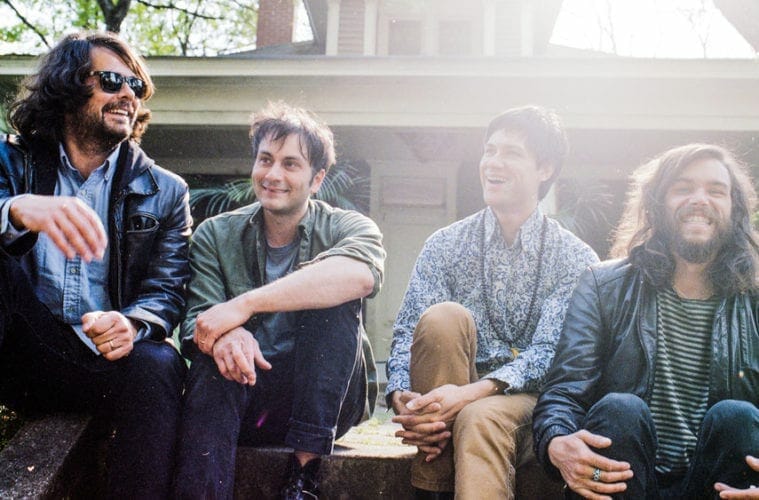 Gringo Star: “Shot in the Back”

Despite the intriguing suggestion of its name, American indie rock group Gringo Star is, in fact, not a cover band/love letter to the oft-underappreciated (yes, we said it!) Beatles drummer Ringo Starr. Although they have drawn comparisons to fellow British Invasion alumni, The Kinks. Led by Atlanta-born brothers Peter and Nicholas Furgiuele, Gringo’s first album, 2008’s All Y’all, was produced by Animal Collective producer Ben Allen, and it’s been going strong ever since.

Their latest release, Shot in the Back, was used to score a dramatic moment during Season 1, Episode 5, of Coyote, a new streaming show released on CBS’ All Access platform. The song is a prime example of music surpassing the medium, given that the series, featuring longtime TV actor Michael Chiklis (remember The Commish?), has received a fairly lukewarm critical reception. But that’s all the more reason to be grateful that it brought us this latest outing, which serves some well-cooked spaghetti western realness with a dash of classic psychedelic pop. Ennio Morricone, eat your heart out.

Last week, SXSW announced the first 100 artists for its virtual 2021 lineup, and the Atlanta hip-hop/R&B duo The Queendom made the cut. It’s  one of the few U.S.-based bands on the roster, one of two from Georgia and the only ATL presence (so far). In honor of the royalty representing Atlanta in Austin this March, we’re bumping back up The Queendom’s September release, “Dear Diary,” which members note was inspired by Moesha, the ’90s sitcom that launched Brandy’s career.

Having created music together since July 2016, Atlanta natives Amanda “Rocket Rhonnie” O’Neal and Christina “AUDIA” Adedeji are funny, talented and off the wall, with biting lines like, “How many diary entries does it take for a [expletive] to heal?” As musical and cinematic nerds with seemingly boundless touch points, they pepper each unique video in their library with set pieces, costumes and visual effects inspired by movies ranging from Kill Bill to 300. As they flit between satire, truth, self-aware silliness and insight, it’s impossible to suppress the surprise and delight wrought by these two artists.

Whether you chuckle, grimace or give a heavy-eye-roll to the combo pun of a name, there’s no denying CunninLynguists’ place at the table for those who pushed the grand tradition of Southern hip-hop forward into the second millennium. Comprised of Willis Polk II (“Deacon the Villain”), Ryan Wisler (“Kno”) and Garrett Bush (“Natti”), the group began in 2000 after Deacon and Kno met at a Morehouse College open mic. (Natti joined in 2005, two years before the release of the sublime album Dirty Acres, which featured the original “Georgia” track.)

In the past two decades, the ‘Lynguists have collaborated with CeeLo Green, Macklemore and others, and have toured with the likes of Kanye West and Aesop Rock. In a 2014 interview, Kno said, “Our sound is hip-hop, but it’s very Pink Floyd-ish, Deep Purple-ish.” Of course, it’s almost impossible to shake the clear reverberations of an OutKast influence, as the ‘Lynguists share the same traits of confessional, sharp, clever and stylish lyrics with cool, rapid-fire delivery and evocative lyrics that settle into your soul long after the track has ended.

Remixing “Georgia” was no easy feat, since it existed as an almost perfect track. The verses grapple with identity, bigotry, spiritual struggle and redemption, home and family, and the pain of history. The haunting lament of the backup vocals, the vivid, symbolic imagery (as the chorus goes, “The clay is runnin’ red from the blood that done been shed down in Georgia”), and the slow, nostalgic strum of acoustic guitar match seamlessly.

But if anyone can pull off a fresh take on a classic, it’s Killer Mike and Khujo Goodie. For Strange Journey, Volume One, released in 2008, they work in Atlanta-specific references and textures, which enrich the whole piece. Here, we get nods to Ray Charles, James Brown, Goodie Mob and Martin Luther King Jr. The poetic prowess ranges from the profound to the just plain fun. Where else will you find a quadruple rhyme in the form of Satan, Macon, Waffle House bacon, and National Lampoon’s Vacation? That’s reason enough to qualify it as the Atlanta Soundtrack Vintage Track of the Week.