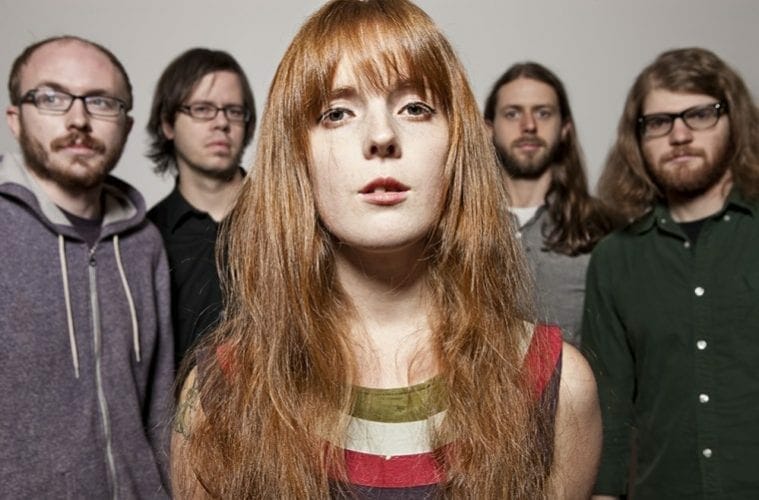 Adron grew up in Atlanta, and played at Eddie's Attic and Java Monkey as a teen before she migrated to Los Angeles.

The Atlanta hard-rock band Conkrete God has a penchant for shrieking guitar riffs and dramatic mythological lewks (think leather, masks, wings — it runs the gamut, especially with drummer Lindsey LeCoda Mitchell, aka “The Conkreetor”). The band’s website declares that it “pulls no punches,” though it must be said that the music is a heaven-made match for thrusting one’s fist into the air.

Conkrete God formed in 2017 as a follow-up project for Terry “Auslander” Webb, Corey “The Professor” Slayton and Norm “Kewl” Smith after their first group, Nutbush, disbanded. With the crucial addition of powerhouse front woman Denitra Isler, who channels Grace Jones and Patti Smith as a singer, they’ve got a full-force sound that bursts through the genre, forging something shiny, new and very metal. Despite their strong, one-of-a-kind identity, the band has said it’s often dismissed at first glance as an R&B or gospel group. Hopefully that’ll be short-lived, and the more they come bursting in, pipes and chords a-blazing, strings a-shredding like they do on “Gold,” the less anyone will make such a clumsy mistake again.

Fun fact: Even if you haven’t seen Conkrete God in concert yet, you may have seen Isler. An actor by trade, she recently joined the cast of the true-story drama Just Mercy (2019) as Evelyn, the sister of Jamie Foxx’s Walter McMillian, who in real life was wrongly convicted and given the death penalty before being exonerated after years of appeals. Isler also has appeared in The Act, Nashville, Good Girls and Dumplin.

Adron: “Song About My Computer”

In late January, Angeleno Adron, aka Adrienne McCann, quietly released what she deemed a “whimsical-pessimist vibe on pandemic loneliness and how I miss being a real-life musician.” Her new single, “Song About My Computer,” is a lament for everything we’ve missed in the past year and a head-bobbing ode to a not-quite-fully-realized life obscured from view behind a sea of endless pixels. She melodically grumbles: “I don’t want to write a song about my computer / But what can I do? / Everything I do is on my computer / it’s my only way through.”

Based in Los Angeles since 2018 — the same year she released her most recent album, Water Music — Adron kept Atlanta as her home base for much of her early career. She began her professional journey as a teenager in Decatur, playing gigs at Java Monkey (RIP) and Eddie’s Attic while still in high school. Her first album hit the stands before she turned 20.

According to her bio, Adron’s instrumental style derives from Brazilian Tropicália and old-school R&B. Her lyrics, in their sardonic, witty, imaginative and infinitely cool fashion flow through the same vein as singer/songwriters Harry Nilsson and Margo Guryan. “Her special tooth helps her whistle,” the bio says. The beautiful, serene loneliness of this tune culminates as she waivers between hope and surrender: “I don’t know, maybe we’ll pull through /  I don’t know, maybe we’re all screwed, I don’t know . . .”

Kenny Mason, a rising rap star with thoughtful, versatile lyrics, exciting tracks and lightning-fast delivery, will probably be a big name soon. The twenty-something emcee virtuoso released his first album, Angelic Hoodrat, in 2020 on the heels of a runaway 2019 hit aptly named “HIT.” It featured him riding through atypically Atlanta neighborhoods in a Braves jersey.

He projects confidence, charm and depth now, some 10 or so years into the pursuit of a full-time musical career. Though he was shy about performing his own music at first, he’s said he grew into his own once he began “rapping for girls trying to impress them, just saying cool stuff like metaphors and punch lines.”

He cites rappers like L’il Wayne, Gucci Mane and OutKast as influences but also grew up listening to the Pixies, Smashing Pumpkins and the Foo Fighters. You can hear some of the latter’s alt-rock influences, especially as the backtrack in this song. You get a moving sense of loneliness from the subdued palette of his dark, moving post-apocalyptic vision of Wes Anderson’s Isle of Dogs.

Folk singer Joyce Brookshire has roots in the Appalachian Mountains of Northeast Georgia and grew up in Cabbagetown, the subject of this sweet, melancholic song. Her mother worked at the Fulton Bag and Cotton Mills long before the hipster lofts that now occupy that spot were a twinkle in the eye of the gentrification milkman.

Brookshire, who died in 2017 at the age of 76, was beloved in music circles but never uber-famous. There’s a John McCutcheon quote on her website that says it all: “Garth, Shania, Trish and Reba may have the names . . . but Joyce Brookshire has the goods.”

She began to write songs when she was 10. In the early 1970s, she worked at The Patch, a drop-in center for kids in crisis. That led her to singer and activist Esther LeFever, who became her mentor. Brookshire’s first solo album, North Georgia Mountains, was released in 1977 by Foxfire Records. In 2009, she was honored by the Georgia State Legislature for service to the Cabbagetown community and the state of Georgia.

And of course, there’s more between those dates. Like Cabbagetown itself, Brookshire’s life is long and storied, with detours aplenty, including a stint in Nashville. Her biography is well worth researching, as is the evolution of the neighborhood she lovingly pays tribute to with the lines, “We’re a mountain clan called Cabbagetown / in the city of Atlanta, G-A / And if it’s the will of God, it’s where we’ll always stay.” That’s why “Cabbagetown Ballad” is our Vintage Track of the Week.

More on the neighborhood’s fascinating and deep history, along with the various origin stories into how it got its name HERE.