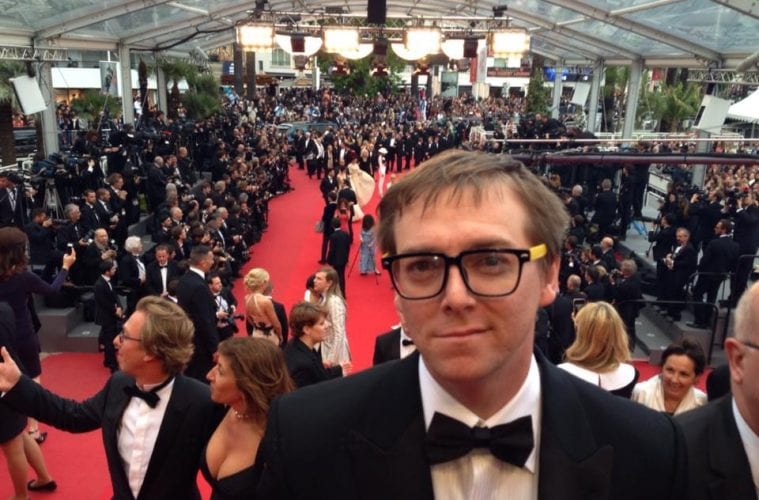 Atlanta-area native Alex Orr has the interesting job of helping to bring his hometown to life in the hit television series Atlanta. As the show’s line producer, Orr works behind the scenes to manage the show’s budget, crews and other technical details.

Orr broke into the film and television industry while he attended Georgia State University. Before Atlanta, he had stints on shows at VH1, Adult Swim and as a producer of the Netflix series Easy. He will be part of a panel of film professionals who will discuss how the film industry can shape Atlanta’s future at the upcoming “NeilAsks” event, sponsored by ArtsATL, November 13 at 5:30 p.m. at the Woodruff Arts Center.

Orr recently sat down with ArtsATL at an Inman Park cafe to discuss Atlanta, how he landed with the show and the travails and challenges of using a live alligator as an extra.

ArtsATL: Tell us about yourself. And what were your first tangences with the world of film?

Alex Orr: I grew up in Atlanta in the suburbs, Douglasville. As a kid I only goofed off with the camera; I never thought it would become a thing for me. Growing up in Atlanta, it wasn’t a movie town — it didn’t seem like a viable thing to do for a living. I went to Georgia State as a history major — then I took a film class and somebody told me it could turn into a job, and I couldn’t believe it. I ended up taking more film classes, never finished school and started to work on movies. I kind of bounced around until now, movie to movie, show to show. I moved to LA, where I lived for three or four years. Seven years ago, I came back to do a show and never left.

ArtsATL: How did the opportunity to work on Atlanta come up?

Orr: My buddy was managed by Donald [Glover]’s manager. I think someone asked him who he knew in Atlanta — and then I talked on the phone with Paul [Simms, Atlanta producer] and Donald and Dianne [McGunigle, also producer]. You know, you always have to get on the phone with the person you want to hire to make sure they’re not crazy and terrible. I got to work on the pilot, and that went really well. When the show got picked up, they kept me.

ArtsATL: What’s your role? What do you do on set?

Orr: I’m the line producer, which means that I do budgeting and logistics and whatever is needed for the creative team to get their ideas to come to life. It’s not a giant show, it’s a modest budget show, so we’ve got to be creative to get it all done. Me and David Swinburne, the production supervisor, work together. We work with accounting to do all the budgeting and the financial reporting with the network, and then we work with the producers and directors to figure out how we’re going to do whatever’s on the page. That means location scouting, finding the right people to get a specific job done. I constantly have to do all the finance approvals and time cards and get everyone paid. When they shoot, unless they do something weird — like an alligator or a car crash — I let them do their thing, and I’m prepping for the next day.

ArtsATL: Speaking of the alligator, how did you find one and bring it on set?

Orr: When they wrote the episode, I had to go ask them, “Do you want a big, legit alligator?” They said, “yeah,” and I had to go around and find one. Got that done, and these animal guys who have owls, alligators and a bunch of penguins showed up with one — I had to be around on set for that. Some animals aren’t legal to have, so I had to make sure we were good to go. They just showed up in a van with the alligator, grabbed the thing by its tail and moved it around. It took a long time to get it moving, he was so big and slow. We had to have everyone hide because if it sees people, it won’t walk. Oh, it was a fun one.

ArtsATL: Have you started working on the next season of Atlanta?

Orr: Not yet. It depends on when they finish writing it — there’s a writers’ room that has Donald, Stephen [Donald’s brother], Stefani Robinson. I think there are five writers. Usually when we start filming, everything is written for the most part. Donald is on tour through the winter into the new year — we won’t start filming until next year. Maybe the next season will be on TV next year, but maybe not.