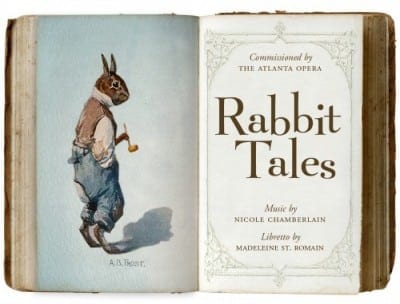 Folk tales have a natural way of transforming, passing orally across generations and cultures. When recorded on paper, they can ignite popular and intellectual interest in those oral traditions, while transforming the path of literature itself. Great commonalities often persist among the versions, however far they may have traveled to find new expression in a local or regional culture.

This commonality plays a key role in the Atlanta Opera’s new children’s opera, “Rabbit Tales,” with music by Nicole Chamberlain and a libretto by Madeleine St. Romain. It’s the first commission in the company’s 32-year history. The world-premiere production runs though November 18. Performances are free, but reservations are required. For information, click here.

Central to its raison d’être, the opera will spend its life traveling across the region for school performances.

“Rabbit Tales” combines four stories from the rural South — drawn from African-American, Cajun, Native American and other origins — as told by a band of traveling singers. The spark of inspiration for the opera came several years ago when Emmalee Iden, the Atlanta Opera’s education director, visited the Wren’s Nest, the Westside Atlanta home of journalist and folklorist Joel Chandler Harris (1845-1908). Harris authored the immensely popular Uncle Remus stories, based on folk tales told to him by slaves and freed slaves while he was working as a printer’s apprentice on a Middle Georgia plantation, during and immediately after the Civil War.

Madeleine St. Romain, a Louisiana-born Atlantan, was recruited into Iden’s project as librettist. St. Romain is clear about her feelings for the broader multicultural origins of these folk tales, even if the names of the four characters — Br’er Rabbit, Sister Fox, Teenchy Duck and King Lion — all appear within the Uncle Remus stories. Her approach was to not imitate Harris but to follow the transmutations inherent in oral traditions of storytelling, to tap into the broader folk origins — “very much in a non-purist manner,” says St. Romain. “It was a personal thing. And some of that was wanting to get more in-context historically and folklore-istically. I wanted to get a good feel for the first versions that Harris had put down.” So she read all the Uncle Remus stories in the 800-plus pages compiled by Richard Chase. The whole collection is in dialect, which she calls “pretty intense” to read. Julius Lester’s retellings also contributed to her research.

Then there’s the Disney factor. One hard reality limited choices among the stories from Harris’ extensive volumes: “We couldn’t use anything that Disney had used, which cut out a great big swath of stuff,” says St. Romain, referring to “Song of the South,” a 1946 movie with blatantly racist content, which Disney long ago pulled from circulation.

She also considered context. “Stories interact with each other culturally, and not always in a culturally appropriative sort of way. So I thought, ‘What kind of rabbit stories can I find that are Southeastern?’ She found a Native American story, “The Theft of Fire,” in two different versions, which landed a place in the opera’s Scene 2, “The People in the Big House.” The librettist calls it “a really fun, positive rabbit story.”

And while reading the Uncle Remus collection. she came across a story called “Honey Butter” “that I knew from my childhood [in] a Cajun version. I know that French-speaking black Creoles and Cajuns interacted, and Cajuns picked up rabbit stories from them. So that’s an interesting connection.” Thus “Honey Butter” became a basis for Scene 4. St. Romain also found an African story of the Gbaya people, “All the Little Animals,” which interested her because Rabbit or Hare is a popular trickster character in Central Africa, “although I think the story I used was collected much after Joel Chandler Harris did his collection here in America. Alas, it’s not dated.”

The common theatrical device of placing tales within the context of a band of storytellers offered St. Romain great flexibility in weaving stories together, but she went a step further in terms of “nesting” storytelling within storytelling. In two instances, the characters in a story are themselves called upon to tell another story to the others.

Before being engaged by Atlanta Opera for “Rabbit Tales,” St. Romain had already written three children’s operas with Arkansas composer Robert Boury. It was after completing the third, “Seastruck,” that she sent the libretto to a friend and fellow playwright, Greg Carraway, who happened to be part of the fund-raising staff at the Atlanta Opera. He passed the libretto to Iden.

Atlanta composer Nicole Chamberlain had been friends with Iden and they had performed together. “We had discussed the frustration of limited choices in the children’s opera genre,” Chamberlain says, “and how it was a daunting decision every year. This year, the opera could [afford to] commission an opera for children. Knowing I had a background in children’s music and vocal music, she threw my hat into the ring.”

Chamberlain believes that what most helped push her through the process was participation in the Atlanta Opera’s competitive “24-Hour Opera Project” several years ago. “Writing an opera in 13 hours was the ultimate test, and I was relieved that it went so well,” she says. Chamberlain’s 10-minute “Scrub-a-Dub Raw,” with librettist Vynnie Meli, won “Audience Favorite” in the competition.

Her “Rabbit Tales” music is, appropriately, on the lighter and transportable side: just four singers, a piano, some small percussion instruments and audience participation. The music combines a variety of styles, including classical, jazz, blues and pop, with references to traditional opera — one being a frenetic chicken song that parodies the Queen of the Night’s aria in Mozart’s “The Magic Flute.” Although adults might catch the operatic references, Chamberlain incorporates them and the popular styles easily and tunefully without veering far from her compositional style for concert pieces, noting that “Kids can perceive when music is being dumbed down to what is perceived as ‘their level.’ ”

Although the opera is being premiered at the Wren’s Nest, the personae of Harris and his fictional alter ego, Uncle Remus, are conspicuously absent from it. Instead, the performers tell the audience that the stories come from all over the world. Not that children of the intended age would necessarily know the difference between Uncle Remus and Justin Bieber, or care. But even as a fiction, Remus remains a controversial character.

The original Uncle Remus was a bit of a subversive, Harris’ subtle way of expressing his own disdain for Southern aristocracy’s social precepts. But in the first half of the 20th century, American commercial and popular culture softened him into a less threatening character, a kindly old black slave who seemed remarkably happy within a seemingly benign antebellum plantation culture. It’s the stereotypical image that was cemented in the public mind by Disney’s “Song of the South.” Later, as the civil rights movement built in momentum and authority, there was a movement among social reformers to eliminate entirely from popular culture what Remus had become.

More recently, Remus and Harris have taken sociopolitical hits from writers such as Alice Walker, who in a 1980 essay accused Harris of “stealing a good part of my heritage.” In contrast, African-American scholar Robert Cochran has written in favor of the original Remus as a subversive personality. He argued that Harris wove a subtle but powerful and progressive stance of anti-racism aimed at influencing an essentially white American readership. Harris, wrote Cochran, presented “a vision that would have shocked and horrified the great majority of his readers, had they understood him.”

In his day, Harris was the second most popular author in America, surpassed only by Mark Twain. Today, with “Zip-a-Dee-Doo-Dah” still ringing in our ears, Harris as a serious literary figure has been erased from the modern educational blackboard. This is despite the fact that his stories emphatically changed the course of children’s literature, directly influencing the likes of Beatrix Potter and A.A. Milne as well as heavy hitters such as Ezra Pound, T.S. Eliot, James Joyce and William Faulkner. What is clear is that Atlanta, a city that has itself struggled with the erasure of its own identity, has a deeper story in Joel Chandler Harris that still needs a significant retelling.

Even so, “Rabbit Tales” stands on its own as a children’s opera, without sharp edges. Yes, King Lion is the antagonist due to his ego, power and greed, but tempered because he is also a buffoon. His antithesis is Teenchy Duck, the rather unassuming if ultimately courageous ingénue. Br’er Rabbit and Sister Fox are somewhere in the middle, sly tricksters but hardly threatening. In St. Romain’s world, they are ultimately friends in spite of their instinctively contentious differences.