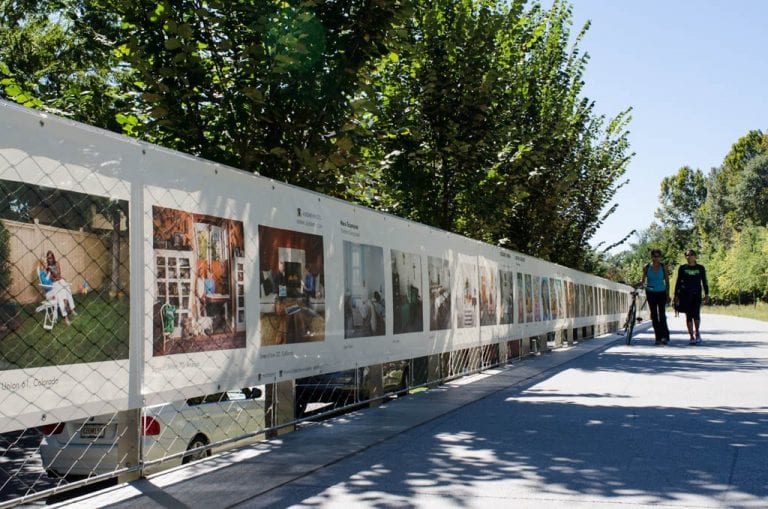 Atlanta Celebrates Photography is in full swing. A roundup of some of the highlights follows.

ACP’s 2014 public art project is a display of works by 40 international photographers, amateurs and professionals. Printed on a 600-foot-long mesh banner that scrolls along the BeltLine’s east side, the photographs revolve around five themes: home, streets, people, creatures and play.

Style and interpretation of the themes vary greatly, from the iPhone images made on assignments by photojournalist Ed Kashi to the poetic variation on birds’ movements in Dancing Birds by Laurie Arends.

The Fence, on display simultaneously in Brooklyn and Boston, was curated in partnership with the producers of the Brooklyn-based Photoville festival and United Photo Industries (UPI).

ACP took advantage of its membership in Festival of Light, an international consortium of photo festivals, to partner with fellow members — Brazil’s Fest Foto in Porto Alegre, Brazil; Fotoseptiembre in Mexico City; and Encuentros Abiertos in Buenos Aires. Curators from each country selected 20 images from five photographers to represent their country’s photography scene.

Encompassing a variety of approaches and styles, from photojournalism to conceptual art, the exhibition offers a taste of the vitality of contemporary Latin American photography. It also exposes, as Argentinian Silvia Mangialardi put it, “an expression of emotions about the mysteries of the time we are going through.”

The Argentinian portion includes Alejandro Almaraz’s portraits of well-known leaders, which he created by superimposing myriad internet images of men in power — a metaphor for the difficulty to know who they really are. Marcos Zimmermann offers desolated landscapes bespeaking loneliness and abandonment, while Hugo Aveta, with his reconstructed postwar and industrial scenes, reminds us gloomily about grand illusions and dehumanized history.

The Mexican series focuses on work by emerging photographers that is “a thermometer for what is happening in Mexico at the moment,” according to co-curator Allegra Cordero di Montezemolo. Images address violence (José Luis Cuevas Garcia), malaise (Karla Lyeva Leal’s anxious self-portrait series), environmental contamination and uprootedness.

Brazilian curator Carlos Carvalho selected a cross-section of established and emerging photographers. Among the newcomers, Calé Merege photographs the reactions of passersby to a same-sex couple locked in an embrace. José Diniz uses a periscope to play with the idea of seeing without being seen.

Long-time photojournalist Ana Carolina addresses the issue of prostitution with a powerful use of colors and contrasted images. Rogerio Reis’ photos of beachgoers in Rio de Janeiro comments on a Brazilian law that requires the faces of people photographed in public space to be hidden. The colored circles hiding the faces bear a resemblance to the work of John Baldessari. He wittily includes a primer on “how to take candid shots on the beaches of Rio.”

Through October 18 at the 1280 Gallery of the Woodruff Arts Center.

The Latin American theme continues in ACP’s lecture series with a talk by renowned Mexican photographer Graciela Iturbide. Her oeuvre, which spans four decades, bears “a documentary aesthetic that is infused with a powerful sense of the lyrical and surreal,” says High photography curator Brett Abbott. The museum, which will co-present the talk, recently acquired 11 of her photos.

October 23 at the Rich Theatre.

As part of its film series, ACP is partnering with BronzeLens Film Festival and will screen Through a Lens Darkly: Black Photographers and the Emergence of a People by documentarian Thomas Allen Harris.

Harris will be present in Atlanta for the screening of his film, which explores how the medium of photography has shaped the identity of African American communities.

He will also present The Digital Diaspora Family Reunion, a live event where people share their stories and family photographs. He launched this program in 2009 to encourage people to preserve their own history. Using interactive multimedia and old-fashioned storytelling, Harris engages audiences to share their private family photographs on a purpose-built website.

He also encourages them to digitize and archive their pictures and do something fun with them, like making short videos, “so they don’t stay any longer under the bed or in the attic,” he said in a phone interview.

He also wants to use photos to see themselves in a larger narrative. “People are the ones who make history and change history. It is very powerful when they understand how a personal family story and photos are connected with larger historic movement,” he said.