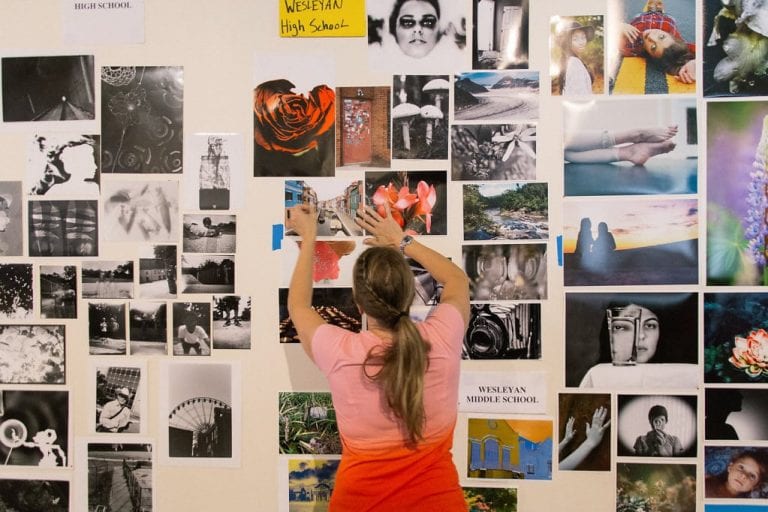 October is photography month in Atlanta and if you are still doubtful, check out for yourself what Atlanta Celebrates Photography (ACP) and its army of volunteers have concocted. For its 18th edition, ACP has put together a wide-ranging and ambitious series of events, lectures, and happenings. This is a true celebration of the medium — one not to be missed.

The Georgia FENCE and Inspired Georgia

For the past three years, ACP has made its temporary mark along the Atlanta BeltLine with an installation referred to simply as The FENCE. The 700-foot long mesh banner returns this year, featuring work by 40 international photographers. A sister initiative to the Brooklyn-based Photoville festival,  The FENCE  (through October 31) has put Atlanta on the map of national photo events.

But this year the project has evolved into a new iteration: The Georgia FENCE. A spin-off of the main exhibition, this second public art installation features 10 Georgia-based photographers. The two identical 250-feet banners showcasing their work travel around the state, simultaneously going from Savannah (through October 2) and Gainesville (through October 16), then Columbus (October 8-November 8) and Thomasville (October 22-December 3).

This state-based thinking is visible in another project, Inspired Georgia, a limited edition photo book that “overlaps and intertwines the visions and voices of 85 Georgia photographers and poets.” A cocktail party, book signing and reading by Pulitzer Prize-winner Natasha Trethewey and Georgia poet laureate Judson Mitcham will take place October 26 from 6:30 p.m. to 9 p.m. at the West Side Cultural Arts Center.

ACP has hosted book fairs in the past, but they remained limited affairs, both regarding depth and scale. This year, the organization has boosted the programming with a highly-curated selection of exhibitors, book publishers, art/photography zines and artists’ talks. “If you are a photo-book fan, you don’t want to miss this one,” ACP Executive Director Amy Miller said.

The Atlanta Contemporary will host the event. ACP is still filling tables for book publishers and exhibitors, but a tentative list is available online. October 29-30.

Among ACP’s most anticipated feature events for 2016 are the Duane Michals’ keynote lecture at the High on October 6 and the following exhibit at Jackson Fine Art. Recognized as one of the most innovative photographers in the field, Michals will share his vision behind the lens and discuss his prolific career. Not surprisingly, this talk is among the three ACP events recently listed in Time as one of the “32 U.S Photo Exhibitions You Can’t Miss” this fall.

The two others are the Baldwin Lee’s exhibit and lecture on October 13, “Land Inhabited and Works,” at MOCA GA in partnership with the Do Good Fund, and Trine Søndergaard at Jackson Fine Art from October 7 to December 3.

Also, high on the list of events not to be missed are the film screening and Atlanta premiere of  “Don’t Blink – Robert Frank,” a documentary based on the work and persona of the legendary photographer. The screening will take place on October 23 at Midtown Arts Cinema. Its corresponding ACP lecture series/Art Papers live presentation of “Instagram as Atelier and Salon,” with Stephen Shore, Peter Halley and Atlanta-based book publisher Bill Boling is on October 22 at the High Museum. “It all started with Thomas Askew,” an ArtsATL collaboration with ACP, Emory’s Stuart A. Rose Library, and the Historic Oakland Preservation will focus on the legacy of African-American photographer Thomas Askew on October 18 at SCADshow.

New Places to Think about Photography

On top of these eye-catching events, ACP shows no shortage of creative venues to think and talk about photography.

Hathaway Contemporary gallery — which opened on the Westside in the spring  — will offer three days of private portrait sessions with the historic large-format Polaroid 20×24 camera under the direction of 20×24 Studio director John Reuter and Atlanta fine art photographer Sheila Pree Bright on October 27-29. The event is a great occasion to get your portrait done before the Polaroid 20×24 comes to extinction. 20×24 Studio is the last company to make the large-format instant film, and it has announced plans to stop production at the end of 2017.

Also worth checking is the third edition of Photo Battle Atlanta, where two photographers simultaneously engage head-to-head in match-ups of images with two projectors and two clickers. The contest winner is decided by a show of applause. The event will take place October 14 at the Aviation Community Cultural Center.

On the humanitarian side, the David J. Sencer CDC Museum presents the work of James Mollison in Where Children Sleep, which features a moving juxtaposition of portraits of children from around the world with images of where they sleep at night.

And if you are still looking for a show to pique your curiosity out of the 120 events listed, ACP Digital Director Michael David Murphy proposes My Mom’s House — Print Exhibition, by Evan Carter, a photographer who calls himself a boomerang kid. Carter used his mother’s house — while she was away — to cast models and photograph nudes. His exhibition will be at his mother’s house. Murphy says that ACP receives a lot of inquiries on how to find locations to hang work. “This one answers the question simply. In this case, the best context for exhibiting the pictures is where they were created,” Murphy said amusedly.