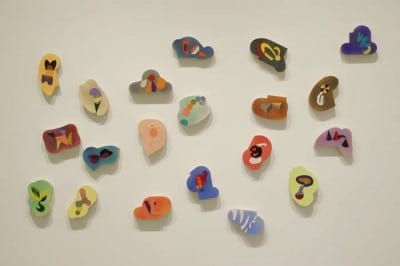 Atlanta artists Marcia Cohen and Tom Ferguson in the spotlight

Marcia Cohen and Tom Ferguson are long-time Atlanta artists whose commitment to their art has never depended on the grow-light of public attention. Serendipitously, simultaneous exhibitions — she at the Museum of Contemporary Art of Georgia, he at Eyedrum — offer an opportunity to see what they’ve been up to.

Cohen’s work is a hybrid of art and research. Color is her fascination, and she has seemingly explored it from every vantage point –perception, theory, symbolism — and in many many mediums. During a residency in the Azores, for instance, she found “The Geography of Color” in the view out her studio window (transmuted into colored lines) and on the beach (in compilations of color-coordinated found objects.)

Such works are included in her exhibit, reviewed in the print edition of today’s AJC, along with paintings, sculptures, books and collages. Cohen is best at her most intimate.

The Rolodexes, in which each card is a little collage, is a witty library of ideas. Flipping through it would be — I’m fantasizing here because it’s inside a vitrine — like a romp through her lively mind.

Tom Ferguson’s 40-year retrospective, though fascinating, is a mess from a curatorial point of view. There’s too much stuff in not-enough space, sometimes arranged chronologically, sometimes not. But it’s also oddly appropriate too.

For Ferguson, art-making is less a career than a yoga practice — a vehicle to get him to a state of consciousness. His willingness to go where intuition leads him, including forays into political cartooning, music, writing and, recently, i-films, resulted in the meandering path documented here.

That said, the man has skills. He is a fine draftsman, painter and colorist. His range encompasses the feather light touch of the pen to impasto as thick and scrumptious as cake frosting, laid down in complex, multi-directional strokes. Add an observant eye and mordant wit, and you’ve got yourself plenty to chew on in this show.

Among the most memorable works are the fictional portraits, a series of heads created between 1984 and 2000.  Kin to the caricatures of his political cartoons, his people sport exaggerated features –elongated chins, hair on end like Don King–emphasized by their poses in profile or three-quarter view. His satire of recognizable types, such as the chic committee woman, the pompous philosophe, is amusing, but the real enchantment of these paintings is their imaginative color variations and the sensuous surfaces.

Ferguson applied the same approach to everyday objects. One such piece is the graphite drawing of a pencil set  in a slathery nest of tar-black paint. Sort of a cross between Jim Dine and Susan Rothenberg, it succeeds in turning something ordinary into something worth contemplating, thus sharing the consciousness he seeks for himself with the viewer.

Ferguson changed direction in 2000. He turned to multi-figured compositions often drawn from his daughter’s drawings and his sketchbooks and thinned paint to an aqueous consistency, which he applied to a bevy of found objects rather than stretched canvas. Perhaps it’s for wont of editing, but the display of these paintings has a desultory air, as if he went off in too many directions.

Nevertheless, Ferguson’s skill and range is impressive. It’s hard to believe that he’s giving up painting to pursue other interests. One more reason to see the show and attend his talk and tour at 4 p.m. Sunday.