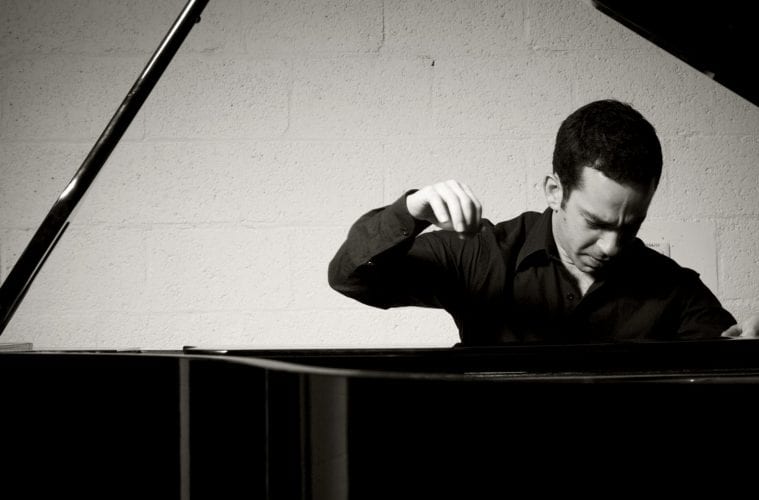 The concert opened with “Dances,” Adès’ 2007 orchestral set from the opera “Powder Her Face.” The original, and quite controversial opera — written in 1995 and based on the scandalous life of Margaret Campbell, Duchess of Argyll (1912-1993) — is essentially about sex, sex and more sex. A new production was mounted by the New York City Opera last February at the Brooklyn Academy of Music.

Adès originally scored the opera for four singers and an ensemble of 15 instrumentalists. For the “Dances” extraction, Adès expanded the orchestration to full orchestra. Its 11 minutes run from the ebullient to the sinister. Its detailed orchestration runs the gamut of color in often giddy, somewhat inebriated popular dances of the early 20th century and dismembered fragments that seem snatched from the underside of Cole Porter songs. For all its wild loops and schmears, these “Dances” were a highly effective, rollicking play on proper society gone thoroughly indiscreet.

It was only late Tuesday, at the close of the business day, that the ASO press office began to send out word that pianist Marc-André Hamelin, who had been scheduled to perform Beethoven’s Piano Concerto No. 4, had canceled due to illness and that Barnatan would be his last-minute replacement. The Beethoven would remain on the program.

Interestingly, Barnatan plays a lot of recitals with cellist Alisa Weilerstein, who performed brilliantly with the ASO on April 11 and 13. They have performed three recitals together since, and Barnatan closed out his month with a chamber concert in New Jersey on April 28.

This was Barnatan’s ASO debut, and he is essentially an unknown pianist to Atlanta audiences. He was born in Israel in 1979 and moved to New York in 2006, where he became a season artist with the Chamber Music Society of Lincoln Center through 2009.

Barnatan’s performance of the Beethoven was stunning, with clarity, inner voicings, sensitively well-shaped phrasing and excitement. Even more, under Wolff’s baton, the orchestra was not merely in time with the soloist but amazingly symbiotic with his manner of playing. Orchestra and soloist felt to the listener “as one” in their musical expression. It was one of those feelings of a musical coming together at a level one rarely experiences in a concerto.

Another coincidental tie-in for Barnatan in this concert is Adès. The composer’s 1992 solo piano work “Darknesse Visible” — which the composer calls an “explosion” of John Dowland’s 1610 lute song “In Darknesse Let Mee Dwell” — is the title track of Barnatan’s second CD, which was among The New York Times’ picks for top recordings of 2012.

Given that Adès’ “Dances” uncorked the evening, it would have been intriguing for Barnatan to have played the six-and-a-half-minute “Darknesse Visible” as an encore, but it also would have been rather daring. It’s not something you’d want to dish out after having just knocked over the crowd with Beethoven. It’s a different kind of adventure, which will have to wait until Barnatan has an opportunity to come back to Atlanta for a more premeditated solo or chamber concert, where he can reveal his passion for the music of living composers such as George Crumb and Kaija Saariaho, as well as Adès. If this performance of the Beethoven concerto is any indication, that would be something well worth anticipating.

The second half of the program was Schumann’s Symphony No. 1. From its opening fanfares of horns and trumpets followed by a tutti response, this half-hour standard is an ensemble piece; there are few moments for individual players. They do exist; most notably one stands out in the final movement, a handful of bars festooned with fermatas, where horns introduce a brief flute cadenza that was played by principal flutist Christina Smith. But this symphony highlights the band as an organism.

It might not have been the piece I would have most spontaneously selected to round out this program, but let’s try to look at it from a different perspective. One can easily imagine that for a musician whose training is immersed in the mainstream repertoire of 19th-century Germanic symphonists, to be in the midst of this work under a conductor like Wolff must be a joy — like comfort food at a family reunion. You know it tastes right when it’s cooked right, something you can’t describe exactly in words and that can be experienced only directly.

Wolff’s engaged conducting involved exuberant but meaningful gestures, from his fan-like left hand to a kind of bouncing, bending the knees of his long, mirandornithic legs, and the solid floor beneath him refused the temptation to become a surrogate trampoline. This is not a criticism, for all conductors dance, whether they admit it or not. The difference is that dancers move expressively in response to music, while conductors move expressively to obtain a musical response. And the best conductors do both.