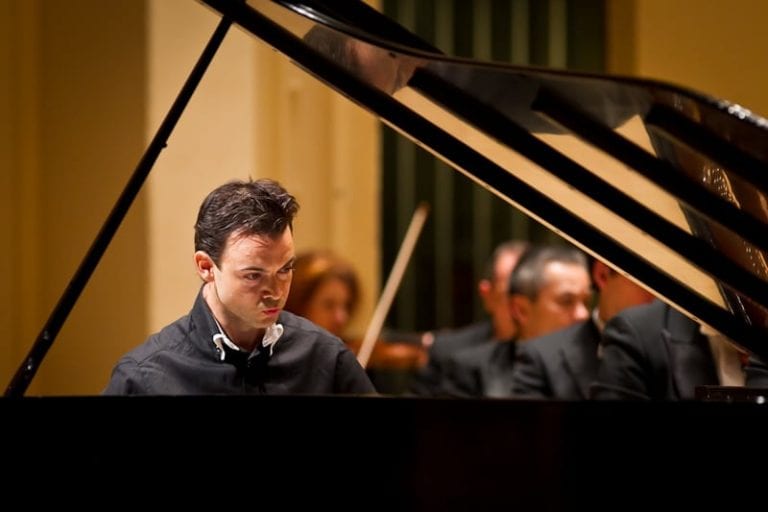 At an extraordinarily competitive time for new young pianists, Dejan Lazic, born in Croatia, has managed to jump to the forefront by combining technical brilliance with introspection and playful, fresh interpretations.

In the summer of 2008, during his first season performing with orchestras, Lazic played Beethoven’s Piano Concerto No. 5 in E-flat Major, universally known as the “Emperor” Concerto, with the Atlanta Symphony Orchestra under Robert Spano, as part of the inaugural season at the ASO’s Verizon Amphitheatre. The pianist warmed up by playing something he’d been working on, an arrangement of Brahms’ Violin Concerto in D. After the concert and dinner, at 2 a.m., he played the whole thing, and Spano liked it so much that he arranged for Lazic and the ASO to perform and record it, resulting in one of the orchestra’s most controversial and fascinating ventures.

Celebrated pianist Dejan Lazic brought new life to the “Emperor” Concerto with a muscular approach and a striking sweetness to his playing in the more delicate passages. (Photos by J.D. Scott)

On Thursday Lazic returned, this time for a regular-season concert, again with the “Emperor.” Beethoven’s last piano concerto, it is full of powerful themes and wild drama. The composer was an innovator, bringing the musical world from the Classical era to the Romantic, and his works are open to interpretations that lean toward either style. Lazic falls more into the Romantic camp, but that doesn’t seem to be what interests him. A composer and fearless innovator himself, he seemed more focused on bringing new life to the work.

Lazic’s approach can be muscular, and he managed the first movement’s smashing chords with dispatch, something that would have been clearer but for Symphony Hall’s muting effect. But what was most striking was the sweetness of his playing in the more delicate passages, and his way of finessing the arpeggios so that the notes sweep by almost as if they are being played by a string instrument. Lazic’s great strength lies in the range of colors he creates, and the “Emperor” is a fine canvas for this. While he plays with seeming ease, he seems jumpy and tense on stage, perhaps an indication of his intense involvement in the process. The audience seemed willing to overlook his oddly hipster outfit (jeans and a black shirt); anyone who plays this well can wear what he pleases.

Robert Spano brought a lush sound and dramatic tension to the “Emperor.”

The “Emperor” is not a work that relegates the orchestra to the background, and Spano is not someone you would categorize as an accompanist. His approach to the Beethoven is clearly a Romantic one, with a lush sound and lots of dramatic tension, which meshed nicely with Lazic’s focus. They are natural collaborators, both grounded in new music and innovation. Spano, who also likes to dress down a bit and to wear black, has clearly bonded with Lazic, and the pianist chose this concert to begin his current American tour.

George Bernard Shaw, before he was known for his plays, was the English world’s most powerful music critic. Of course, that was back when music critics were famous and rich. (Yes, reader, that was a tear in my eye.) Shaw made the case that Edward Elgar, his contemporary and fellow Englishman, was the rightful descendant of Beethoven. By placing Elgar’s Symphony No. 1 in A-flat major on the same program with the “Emperor,” a coupling that might seem odd, the folks at the ASO have given us an opportunity to test this. It is an eccentric theory, because of Beethoven’s position as a creator of Romanticism, dragging along quite a bit of Classical sound with him, while Elgar was generally post-Romantic, more modernist than not.

The First Symphony, which was first performed in 1908, is quintessentially English. A meandering and rather unsettled piece containing a wealth of material, it manages a sort of patriotic sound, but not a joyful one. It usually works best when given a spacious reading with quite a bit of reverence. But, as usual, Spano has his own ideas. His approach, fiercely intelligent as usual, emphasizes the piece’s extremes of pacing and volume and turns it into more of a programmatic work than is usually suggested. (Elgar insisted that there was no program, just what he referred to as “absolute” music.) Played this way, it just seems overdone. Less would be more. Still, if you wanted to make Shaw’s case for the Elgar-Beethoven connection, this concert would provide your best evidence. It will be repeated Friday and Saturday, January 6 and 7, at 8 p.m.

On January 12, the ASO will team up with the glee clubs from Morehouse College and Spelman College for the 20th-anniversary King Celebration, a tribute to Martin Luther King Jr. Until now, the event has been held at Morehouse College, King’s alma mater, but this year it moves to Symphony Hall, which can accommodate a larger crowd. This is simply one of the most entertaining and joyful events on Atlanta’s musical calendar, and it deserves a larger and broader audience. Cellist Yo-Yo Ma will be featured as soloist. The performance is at 8 p.m., and ticket information is available on the ASO’s website, www.atlantasymphony.org.