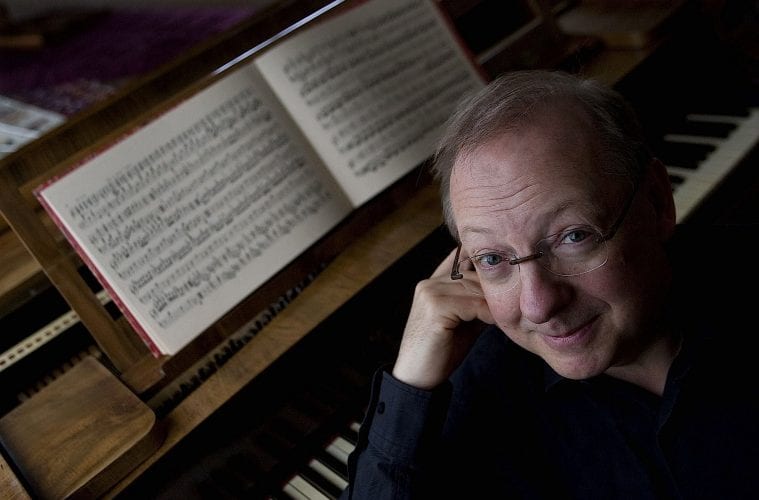 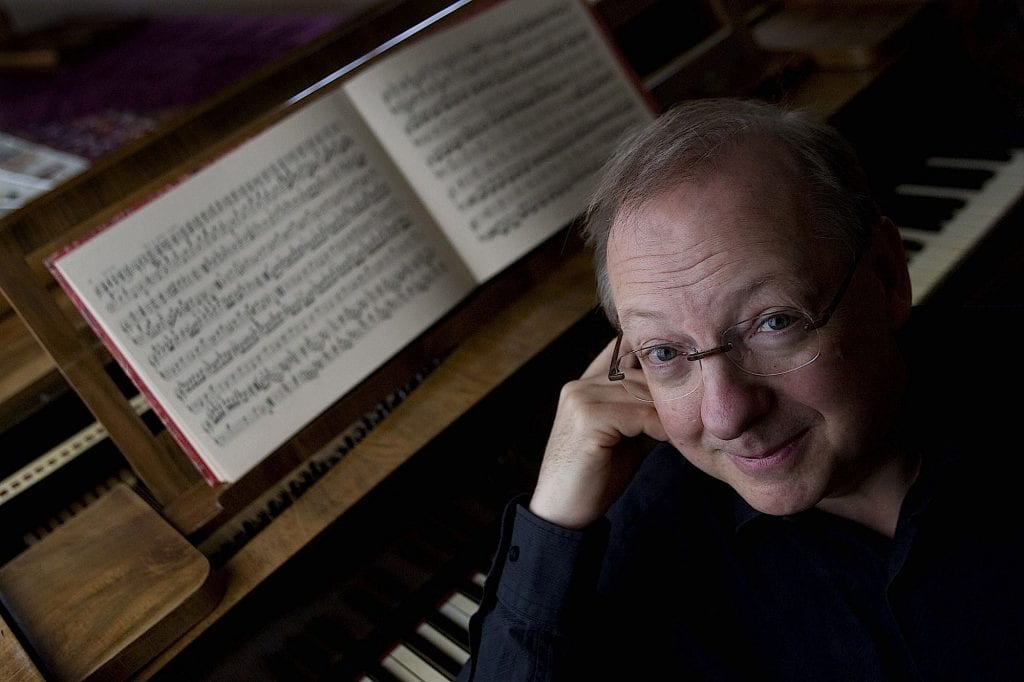 Guest conductor and early-music expert Nicholas McGegan conducts without a baton, which makes him fascinating to watch. (Photo by Randy Beach)

It’s the first in a group of a dozen concerti grossi that Handel composed in the older manner of Arcangelo Corelli’s dozen concerti grossi of a quarter-century earlier, written for a concertino of two violins and a cello set against the ripieno, or full orchestra. In this performance, the ripieno included two oboes as in Handel’s manuscript, plus a bassoon to support them as would be common practice of the era, rather than as it was originally published with an orchestra of strings alone.

McGegan conducts without use of a baton. His is the most idiosyncratic conducting style I’ve seen this season, with a fascinating vocabulary of hand gestures, mostly rounded arm movements, and an occasional bounce that gave his conducting a kind of impish quality. It does not seem artificial, but rather a natural outgrowth of his ebullient personality.

This is a conductor who seems most at home with “happy” repertoire, however substantive it may be, though items such as Handel’s tragic operas are among his oeuvre. As McGegan is quoted in his biography, “I’m serious about things that matter but I’m not pious, if you know what I mean.”

Next up was guest violin soloist Stefan Jackiw in the “Scottish Fantasy” of Max Bruch. Widely heard as a standard of violin repertoire, its four movements are based on Scottish folk tunes: “Auld Rob Morris” (also known as “Through the Wood Laddie”), “The Dusty Miller,” “I’m A’ Doun for Lack O’ Johnnie” and, in the finale, what can be called the unofficial Scottish national anthem, “Scots, Wha’ Hae” (or “Hei Tuti Teti”).

Jackiw gave the “Fantasy” an empyreal rendering with a lyrical vitality that’s especially necessary for a work so familiar. His performance, especially the finale with its sweeping, vertiginous runs in the solo violin, drew from the audience the largest ovation of the evening, with the soloist called back multiple times.

Also worth noting is that, after the violin solo, the second most important role in the “Scottish Fantasy” is the substantial part for the harp, in which principal harpist Elisabeth Remy Johnson sympathetically underscored Jackiw’s violin.

Jackiw returned to the stage for an encore: the Largo from J.S. Bach’s Sonata No. 3 for solo violin, BWV 1005, which he performed with a remarkably sensitive intimacy. McGegan, in the meantime, had taken a seat on a riser in the back of the orchestra, next to the horns, to listen, and at the end he had a big grin on his face as he joined in the applause. He must have then seen someone he knew in the audience, because he looked out toward a seat in orchestra left, gestured enthusiastically and clearly mouthed the word “wow!”

After intermission came “Dance of the Blessed Spirits” from the opera “Orfeo ed Euridice” by Christoph Willibald Gluck.  A work so familiar that it’s a chestnut of music appreciation studies, this was, quite curiously and astinishingly, its first performance in an ASO subscription concert. Once again an ASO member was given a due spotlight. Principal flute Christina Smith stood for the famous flute solo in the middle section, offering up a pleasingly delicate and graceful performance.

Felix Mendelssohn’s Symphony No. 4 in A Major, nicknamed “Italian,” concluded the program. Its opening Allegro vivace was suitably sunny; the ensuing Andante con moto was definitely “with motion” and did not lag; the third movement, marked Con moto moderato, contrasted a graceful Minuet and a Trio featuring noble fanfares in the horns and bassoons; the concluding Presto, a lively, merry saltarello, jumped and scurried along to a rollicking, forceful ending.

The concert will be performed again tonight and Saturday evening in Symphony Hall.