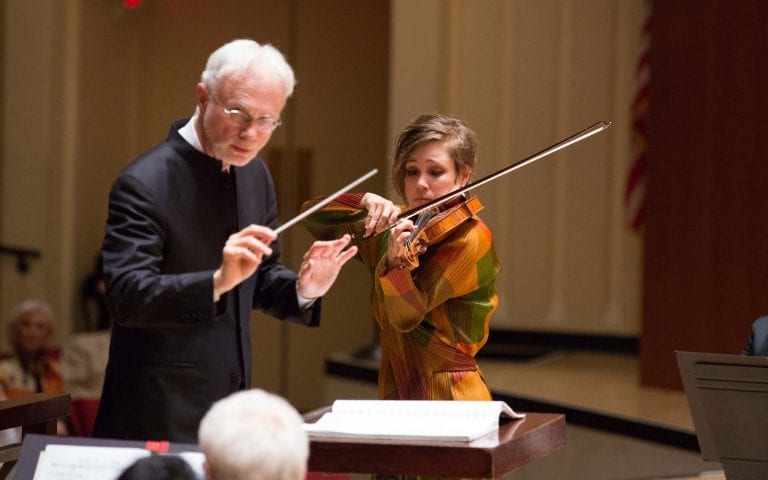 On Thursday evening at Symphony Hall, the Atlanta Symphony Orchestra performed a concert of music by Liadov, Respighi and Adams, led by guest conductor-composer John Adams and featuring guest violinist Leila Josefowicz. Although there is a prominent history of performing and recording of Adams’ music by the ASO, this is only the third time Adams has appeared with the orchestra as guest conductor. The program will be repeated Saturday evening at Symphony Hall.

The concert opened with “The Enchanted Lake” by Anatoly Liadov (often spelled “Lyadov”). Written in 1909, the eight-minute tone-poem does not bear a specific dramatic story, but is simply a musical portrait of a lake with a general impression of mists and enchantment. Although Liadov was one of the “Mighty Handful” of Russian nationalists, much of the music has the obvious stamp of Wagner’s influence — “Forest Murmurs” comes to mind. In this performance, we got the lake, but not so much the enchantment.

Ottorino Respighi’s “The Pines of Rome” followed, one of a trilogy of significant and influential “Roman” symphonic poems written by him, this particular one composed in 1924. It is a piece that the ASO has had in its repertoire for a long time and plays well, as it did this evening.

The second half of the program was the focal point of the evening: a new work by Adams, “Scheherazade.2,” which the composer calls a “dramatic symphony” for violin and orchestra. As in Rimsky-Korsakov’s “Scheherazade,” the solo violinist is the protagonist, but here as an up-front soloist rather than from within the orchestra.

This was the work’s third set of performances and only the second set in which Adams has conducted it. “Scheherazade.2” was premiered by the New York Philharmonic on March 26 and 28 with its music director Alan Gilbert conducting. Adams himself led the work for the second performance by the Cincinnati Symphony Orchestra on April 17 and 18.

Adams offers a descriptive dramatic thread to “Scheherazade.2.” The heroine, a strong, self-confident woman, is pursued by religious zealots; a love scene (Adams makes a specific point in his notes to suggest “perhaps her love is also a woman?”); then a trial by “men with beards” who rage and argue doctrine, while she defends herself calmly; a conclusion with a final escape, flight and sanctuary for the heroine.

The soloist in all three presentations to date has been violinist Leila Josefowicz, for whom the work was written and whom Adams considers the ideal avatar of the fearless, empowered heroine-as-artist in his modern Scheherazade. Needless to say, Adams and Josefowicz have been long-time friends and collaborators. Josefowicz gave the solo violin part a brilliant, dazzling performance, playing the intense and technically complex part from memory.

The work also contains a rather substantial part for cimbalom, better known to Americans as “hammered dulcimer,” that was performed by Chester Englander, who has also played it in the previous performances. The orchestra executed their own challenging parts well, too. One wonders whether they will receive combat pay for their efforts, as it is not only a complex work, but for the most part a tightly-wound one, almost relentlessly so for a total duration of around 45 minutes. That itself is rather hard for both musicians and audiences. Thankfully, the work ended on more lyrical passages, retreating quietly into silence.

Adams’ music is well-crafted. The real question, then, is whether the music works, or will even survive in the repertoire, without its sociopolitcal presumptions attached (or without the championing of Josefowicz). It would have certainly been provocative, front-edge social change in the late 1970s or an earlier era, but today, in the second decade of the 21st century, the premises are simply raised to the level of stereotype, at least in the global cosmopolitan culture where they are, to a great extent, today’s politically correct establishment view.

Adams’ version of the story is unquestionably born of current cosmopolitan progressive thought: men are the source of social evil and, in the end, the heroine Scheherazade escapes her oppressors. However, those men persist in their ideas, ways and values. By contrast, in the traditional story, Scheherazade ultimately changes the Sultan’s mind, thus changing the man, and he recants his vow. That’s the essential transformation which does not happen in Adams’ version. Perhaps Adams should ponder these things.