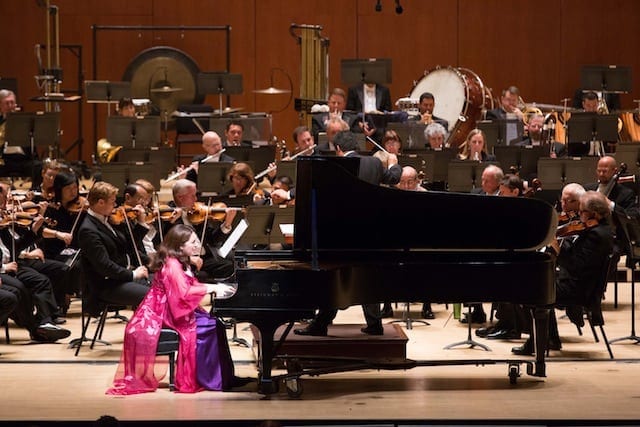 Simone Dinnerstein debuted “The Circle and the Child.” (Photo by Jeff Roffman)

Harth-Bedoya, who became principal conductor of the Norwegian Radio Orchestra this season, opened the concert with Respighi’s symphonic poem “Fountains of Rome” (“Fontane di Roma”), written in 1916, which portrays four different fountains over the course of a day. Scored for large orchestra, it’s a 15-minute symphonic showpiece. The ASO played skillfully, from subtle pianissimos of the gently swirling opening string lines to broad, loud and brassy climaxes, returning at last to a quiet conclusion.

Next up, Dinnerstein joined Harth-Bedoya and the orchestra to premiere “The Circle and the Child,” a new piano concerto by American composer Philip Lasser.

In an April 2013 post on his blog, Lasser wrote, “In 2009, shortly after performing and recording my 12 Variations on a Chorale by JS Bach, Simone Dinnerstein asked me to write her a concerto.” Yet there are indications of much earlier ruminations on the composer’s part. While neither the abbreviated nor extended program notes say so, another part of Lasser’s own website states that “The composing of the Concerto began as far back as 1999 and has slowly been evolving into a three movement work [….] The concerto is being completed for pianist Simone Dinnerstein.” The post is dated as “2008 (work in progress).” Certainly it’s easy for personal websites to go unattended, but in this case that serendipitously provides insight beyond the content of available program notes and the vivid promotions surrounding Thursday’s premiere.

Lasser’s personal musical affinities seem to lie with Bach, Debussy and Schumann, and he also seems in part a product of the cabal surrounding David Diamond, who was a longtime member of the Juilliard School faculty. Diamond is considered among a “forgotten generation” of American composers who were prominent in the 1940s and ’50s but eclipsed by more avant-garde and postmodern trends over the rest of the 20th century.

Indeed, Lasser’s music mostly harks back in time through its various historical tethers. Only in its final movement did it at least speak a bitonal language as an apparent analogy for conflict between orchestra and piano. A Bach chorale, “Ihr Gestirn, ihr hohen Lüfte,” permeates the concerto, whether in background or foreground. It’s not unusual for the best among composers to reach back to Daddy Bach for inspiration, but it’s hardly a sole object upon which to hang a composition’s success.

Lasser certainly cannot be indicted simply for use of a conservative musical language. There are many moments of obvious beauty in his music, and logic and craft aplenty. Nevertheless, in the end I was not persuaded, even with Dinnerstein as soloist. Certainly Dinnerstein, who is noted for digging deeply to find the musical essence of every piece she performs, played beautifully, and the part she was given is pianistic. But it afforded her no real opportunity to “wow” the audience with fire or awe beyond beautiful bell-like tone, with final repeated figures in the piano part coming across, disappointingly, somewhat like Keith Jarrett on Quaaludes.

By contrast, I urge readers to listen to Lasser’s thoughtful, subtly engaging “Twelve Variations on a Chorale by J.S. Bach,” a 2002 solo piano work based upon “Nimm von uns Herr Du Treuer Gott,” which Dinnerstein recorded live in concert in Berlin. I would deign to perform it myself, were I a piano recitalist. It too, however, could as easily have been written in a different, earlier era than our own.

The concert concluded with excerpts from Prokofiev’s ballet “Cinderella.” This was not the three familiar Suites, Op. 107-109, authorized by the composer, but Harth-Bedoya’s selection of excerpts from the complete ballet, in a sequence that ran just over 40 minutes. It included 13 titles from the composer’s original 50 ballet numbers. Well played by the ASO, Prokofiev’s 1945 score proved the most “modern” piece of the evening.