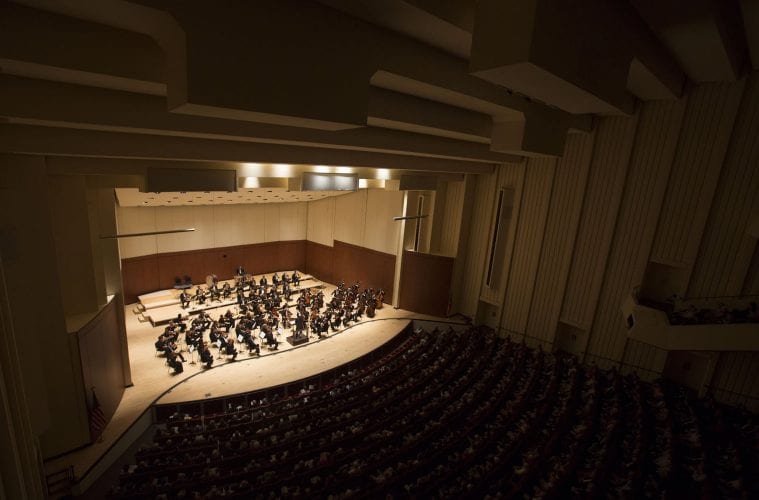 The new shell has brought a vibrant tone to Symphony Hall. (Photos by Jeff Roffman)

On Thursday in Symphony Hall, the Atlanta Symphony Orchestra opened its 2013-14 season with music of Bach, Brahms and Beethoven, led by Music Director Robert Spano with guest piano soloist André Watts. The concert will be performed again tonight (Friday) at 8 p.m. and Saturday at 7:30 in Symphony Hall. In addition, Spano and the orchestra, with Watts, will perform the same program at 3 p.m. Sunday in Hodgson Concert Hall at the University of Georgia in Athens.

In a longstanding tradition among American symphony orchestras, the ASO kicked off the season opener with “The Star-Spangled Banner,” the audience standing to join in, with a cameo appearance by members of the ASO Chorus lined up in the aisles along the walls in support of the vox populi.

The concert was also the orchestra’s first using its new, $500,000 acoustical onstage shell, which replaced the original one in use since 1968. The evening was the first chance for the orchestra to hear the new acoustics from onstage with a large audience in the hall, which is very different from playing to an empty hall. It changes what the players themselves hear, and it is a crucial test of adjustments that the orchestra and shell technicians had been working on for over a week in situ, ever since construction was completed.

As the audience settled back into its seats (R&B star Usher was in the row in front of me), most of the orchestra left the stage, as much smaller forces were required to perform Bach’s Orchestral Suite No. 3 in D major. The suite’s opening “Overture” suffered some ensemble problems, timings being not quite together between sections. The famous “Aria,” which followed, gave opportunity to adjust in a lyrical context. The ensemble drew somewhat rhythmically tighter for the rest of the suite.

Brahms’ Symphony No. 3 was a much better test case for the listener. Overall, the sound out in the audience now feels warmer, possessing more bloom, and at the same time more immediate and detailed, even under the dreaded overhang of the loge over the back rows on the main floor. As one colleague in the audience with good critical ears said at intermission, “The new shell is the star of the show.”

Intermission is a good time to make a complaint about two pages in the “Encore” program booklet, where the evening’s program list was found. A “concert at a glance” on the righthand page substituted for extended program notes, although those are available online. As an addition to the notes it is welcome, but alone this “glance” is a considerable “dumbing down.” Designwise, it looks less like a concert program than the back of a box of breakfast cereal, albeit less colorful. Two thumbs-down to this — more if I possessed more thumbs.

After intermission, Watts took the stage as soloist for Beethoven’s Piano Concerto No. 3. Watts catapulted into fame at age 16, when Leonard Bernstein tagged him to solo in the New York Philharmonic’s nationally televised “Young People’s Concerts,” then immediately had him substitute for Glenn Gould in a Philharmonic subscription concert. Watts, now 67, most recently appeared with the ASO in March 2012, when he performed Grieg’s Piano Concerto in A minor.

For this concert, Watts chose not to play the orchestra’s new Steinway D. Word is that he thought the instrument was not quite ready for performance, so he selected one of the ASO’s older pianos instead. That choice actually gave the audience a better measure of the acoustical change in the hall where piano solos are concerned, by dint of a more familiar instrument. It was indeed another sign of the hall’s improvement.

Watts played with a score laid flat where the music rack normally would have been, perhaps only as a safety net. However, his playing continues to possess an opulence and warm lyrical tone, in contrast to players with more modern, sharp-edged ones. That might be old-fashioned, but is it not obsolete or unappreciated. Watts, Spano and the ASO were all in sync, displaying the new sound of the hall at its best, and resulting in a long and sincerely deserved standing ovation for all.