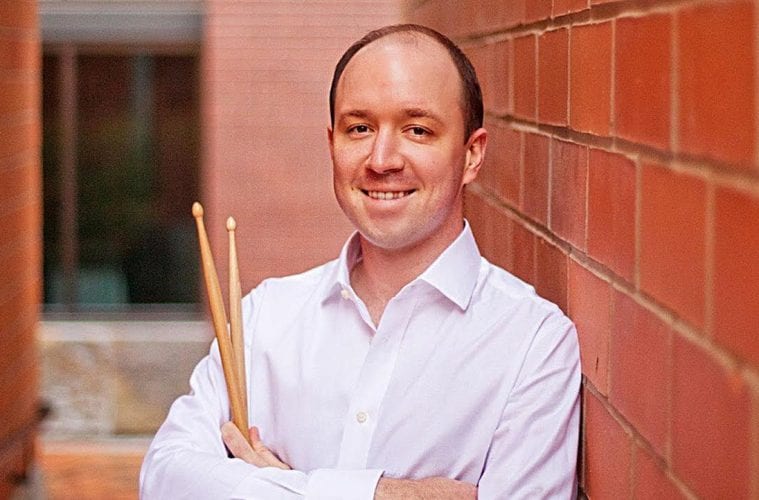 He is married to flutist Jessica Petrasek, whom he met at Tanglewood Music Center. They perform chamber music together as the Petrasek Duo. ArtsATL had the opportunity to speak with Petrasek about his personal musical journey and new role of principal percussionist with a major symphony orchestra. This is the first in an occasional series that will focus on the musicians in the Atlanta Symphony Orchestra.

ArtsATL: How did you get into music, and what led you to playing percussion?

Joseph Petrasek: I played piano when I was very young, between the ages of four until maybe around seven years old. Neither of my parents is a musician, but they are very much music lovers. My dad especially is a huge jazz fan, and classical music too. Playing piano was an extracurricular thing they wanted me to do as a kid, and I enjoyed it; then I stopped playing piano around the age of nine. I just wanted to play the drums.

There’s a story my mom tells. She had some knitting needles on a coffee table and there was a recording on. I was banging on the table with the needles and denting it. My mom came over and took them out of my hand, and I remember her saying, “I love your passion about this. If you want to take drum lessons then we can do that, but please don’t ruin the table anymore.” So I said, okay, I want drum lessons.

I had no idea where it was going. I was lucky to have really good teachers early on. I actually started getting into doing orchestral percussion relatively early. When I was 11, I played in the Disney Young Musicians Symphony Orchestra. That was my first orchestra thing. It was a summer program for children under 12 [that] doesn’t exist anymore. The older I got, the more important percussion was to me, and by the time I went to college, I knew it was what I really wanted to do.

ArtsATL: Would you say that your father’s interest in jazz had an impact?

Petrasek: Oh, undoubtedly. I didn’t appreciate it when I was really young; the record collection he had was all just background music to me. He was listening to all kinds of really cool stuff. When I started actually playing jazz, I sort of rediscovered his record collection; then we had this thing that we both loved. Yeah, it was like the seeds of it were planted early on without me knowing. My parents are uncommonly supportive. To their credit, they never told me no; they never gave me a hard time about wanting to do music. Petrasek: Matched. At the time I was learning, around the late ’70s, ’80s, most instruction went from teaching traditional to teaching matched. It makes a lot of sense. You can play traditional grip with snare drum, but you can’t do it for xylophone, marimba or any other percussion. So if you learn snare drum matched, then you have the grip that’s useful on everything you play. You don’t have to relearn how to hold other mallets.

A lot of the younger jazz drummers still do traditional. It’s kind of a throwback or nostalgia trend. They watch the great jazzmen they love — like Tony Williams, Elvin Jones or Max Roach — and they still all play traditional. They see that; they want to do that. It worked for me to have learned matched because of what I ended up doing in classical music.

Petrasek: The most basic thing is that I play what you may describe as the most difficult or most prominent part. When we do “Bolero” or “Scheherazade,” I’ll play the snare drum part. When we do “An American in Paris,” I play xylophone. That’s the surface level of it. The big difference is really behind the scenes. I’m responsible for several things. I have to get the percussion parts from the library and assign them to players. For any other section, it’s already laid out. When we get percussion parts, there’s no preordained diagram for how these are divided up, especially when we do complicated things like the movies that we do, like Harry Potter or Jurassic Park. You have this book that’s 70 or a hundred pages, and it’s all the percussion parts. I have to decide, “How many players does this need? How is this set up?” I have to make a stage diagram of how the instruments are set up. I am responsible for the choreography of who is playing what and when, then decide how many players I want to hire as extras and who they are going to be. We’re fortunate in that there’s a lot of really excellent freelance percussion players in Atlanta.

If you don’t do it well, you either have players doubling up unintentionally or, more likely, you have something that’s being left out. It involves a massive amount of time. Assigning a movie or film score can take, on an easy one, three hours and a really long one five or six hours. It’s a big change for me, because I didn’t have to do almost any of that in Kansas City. But I knew exactly what it would be like coming into this job, and I enjoy it very much.

An0ther responsibility is I have to acquire instruments for some pieces of music. The Atlanta Symphony owns a vast array of percussion instruments, but we don’t own everything in the world. Going back to Jurassic Park, there’s an instrument called boobans, which are long tubes with small heads, and they have a very specific sound. We don’t own them, so I had to acquire that for the orchestra.

ArtsATL: I guess in the same context, when you have something that’s like an archaic name of an instrument in a score, you’ve got to figure out what it is, like the “tambourin” in Bizet’s “L’Arlésienne Suite No. 2.”

Petrasek: The score says “tambourin,” and a lot of people, especially younger orchestras, will grab a tambourine for that because they think that’s what it is. It’s confusing because “L’Arlésienne” is “the girl from Arles.” Arles is in the Provence region of France, and when Bizet says “tambourin,” he means a “tambourin provincial,” which is a very specific instrument we happen to own at the Atlanta Symphony. You have to have the knowledge about “What does the composer mean by this?” And then, even if you know what the instrument is, can you get one?

ArtsATL: Even with common percussion instruments, you have to make choices, both practical and musical, such as size of a pair of cymbals, for example.

Petrasek: Some of those choices depend on who the conductor is. There are some conductors who will be very specific with what sound choices that they want from you; a lot of other conductors kind of leave it up to you. Yes, I’m playing the same notes in the same place, but I can change a lot about what I’m doing and how I’m doing it, and some of it’s just for me. We’re adjusting things all the time, so it’s fun.