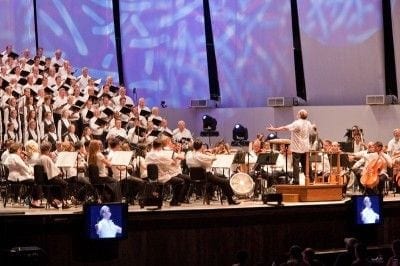 Verizon Wireless Amphitheatre at Encore Park, in the northern Atlanta suburb of Alpharetta, is a very big place. Last year, the Atlanta Symphony Orchestra inaugurated the venue with a sold-out extravaganza, and it was anyone’s guess how many patrons would attend classical concerts at Encore Park on a regular basis.

Saturday night, conductor Robert Spano, the ASO and its unstoppable Chorus opened the 2009 summer season. The performance of excerpts from Rossini’s “The Barber of Seville” and Orff’s “Carmina Burana” was beyond all expectation, as I wrote in an AJC review. Yet just 2,500 people attended, according to ASO figures.

While that felt slight for a 12,000-seat pavilion, it’s still more than would have fit into the 1,750-seat Symphony Hall. Well, it’s a start. As ASO president and CEO Allison Vulgamore told me years ago, in what seems to be a ASO mantra, “We’re always growing, but slowly.”