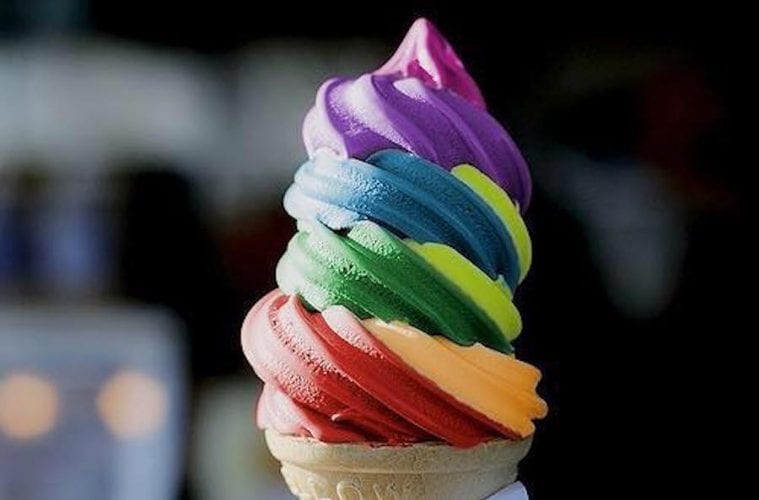 When the mercury hits the 90s in Atlanta during the summer, we start to think about ways to get some culture and stay cool at the same time. Below is ArtsATL’s list of upcoming events guaranteed to help you chill out while staying cool.

Long before The Walking Dead saw the light of day, outsider director George A. Romero created the great-granddaddy zombie movie of them all, the low-budget 1968 shocker Night of the Living Dead. To this day it remains an influential (and still terrifyingly gruesome) classic. A screening at Atlanta’s coolest movie venue, the Fox Theatre, celebrates the film’s 50th anniversary. The screening is part of a whole zombie weekend, including a (21-and-over) Zombie Pub Crawl. If something more chill than the zombie apocalypse is your style, check out some of the later films in the Fox’s Coca-Cola Summer Film Festival, including Saturday Morning Cartoons on July 28 or Barbra Streisand in Funny Girl on August 2.

If there’s one thing that can tempt us out into the park this time of year, it’s ice cream, and the eighth annual Atlanta Ice Cream Festival will have plenty of it as Atlanta celebrates the art of ice cream. The free-to-enter, family-friendly event in Piedmont Park features an ice cream-eating contest, music, demonstrations, health and wellness activities and vendors selling every kind of ice cream imaginable.

Each month, the musicians of ATL Collective pick a classic album and cover the track list in sequence. This month the collective is partnering with the Atlanta History Center to honor the whole range of Southern sounds that came out of Muscle Shoals, Alabama. The performances by Lee Bains III and the Glory Fires and other musical guests will take place in the History Center’s Grand Overlook Ballroom and will feature songs by acts who recorded in the legendary locale including the Rolling Stones, the Allman Brothers, Aretha Franklin, Paul Simon, The Black Keys and more. History Center exhibitions will be open throughout the evening, Lovie’s BBQ will serve up the chow, and cash bars will have a little something extra to keep you cool.

Legendary country music star Marty Stuart is every bit as accustomed to holding a camera as he is to holding a guitar. Stuart has been taking striking, stark black-and-white photographs throughout his illustrious career. A new exhibition organized by Nashville’s Frist Center for the Visual Arts arrives in the Atlanta area this month at the Booth Western Art Museum in Cartersville, Georgia. Check out Stuart’s candid images of friends and fellow musicians like Dolly Parton, Willie Nelson and Johnny Cash; his portraits of American landscapes; and his photographs of members of the Lakota Tribe of North Dakota. And the Booth Museum — we can’t help but note — is temptingly close to Lake Allatoona, so when you’re done admiring the photographs, head to the shore to cool down lakeside. There are access points all around the lake, but the quiet, tiny beach at Red Top Mountain State Park is one of our favorites.

Around mid-July, the notion of April certainly does sound enchanting. This July, the Weird Sisters Theatre Project, an Atlanta-based theater collective that seeks to create more opportunities for women in theater, unveils its new production of Matthew Barber’s 2003 Tony-nominated play. Based on Elizabeth von Arnim’s 1922 novel, the show tells the story of two London housewives who pool their savings to rent a villa in Italy. The promotional materials promise that the show will whisk viewers away to the whimsy and magic of springtime in Italy. To that, we can only say: perfetto.

Who’s the coolest singer ever? Even during the dog days of summer, we think of Tony Bennett as the equivalent of a welcome blast of arctic air. The 19-time Grammy Award-winning singer will perform songs from throughout his six-decade career at Atlanta’s Symphony Hall. Bennett’s daughter, Antonia Bennett, has been touring with her father and will open the performance with a collection of jazz/pop standards.

Check out the brilliant moves of Atlanta contemporary dance company Terminus Modern Ballet Theatre while at the High Museum. Members will perform Heath Gill’s Confronting Genius, “a whimsical duet looking at unshackling the artist that lives inside all of us.” Alongside the company, students from TMBT’s Advanced Summer Intensive will showcase the dance works they’ve learned under the company. While at the High, be sure to check out the new temporary exhibitions Winnie-the-Pooh: Exploring a Classic, Outliers and American Vanguard Art and if you can take the heat, the installation Sonic Playground outdoors on the High’s Sifly Piazza.